On a warm Thursday afternoon earlier this month, seven high school students were holed up on the fourth-floor studios of …

Dean Ila Berman and the members of the Dean’s Advisory Board are pleased to announce that Reuben M. Rainey, FASLA (MLA …

Class of 2019: Trombonist Improvises and Creates a Whole New Tune

David Shim still remembers the moment clearly. Then a second-year student, he was sitting in Campbell Hall, home to the University …

For many, the term architecture brings to mind images of sleek, abstract buildings and elaborate schematics that serve as part …

‘In The Mindset of Martin’ Embraces Inclusivity Through Design

In celebration of Martin Luther King Jr.’s 90th birthday, the University’s School of Architecture is hosting “In the Mindset of …

In architecture, the phenomenon is referred to simply as “the missing 32 percent.” The phrase is shorthand for the drop-off between …

West African architect Francis Kéré, founder of the Berlin-based firm Kéré Architecture, is the 2021 recipient of the Thomas Jefferson Foundation Medal in Architecture.

Kéré received his architectural degree from the Technische Universität in Berlin in 2004, having originally been trained as a carpenter both in his native country of Burkina Faso and in Germany. While still an architecture student, he set up the association Schulbausteine für Gando e.V, later named Kéré Foundation e.V., which loosely translates to “School Building Blocks for Gando,” to fund the construction of a primary school for his hometown of Gando.

He went on to complete his studies and build the Gando Primary School as his diploma project in 2004, the same year he also founded his own architectural firm, Kéré Architecture. His first-ever building was awarded the prestigious Aga Khan Award for Architecture, recognized not only for its innovative construction techniques and expressive care in craftsmanship, but also for being built cooperatively by the Gando community.

Over the course of nearly two decades, Kéré has gone on to become one of the world’s most distinguished contemporary architects, celebrated for his pioneering communal approach to design and his commitment to sustainable materials, as well as modes of construction. Inspired by a curiosity for the particularities of any given locality and its social tapestry, he and his diverse team at Kéré Architecture have completed renowned projects across four continents. Most prominently these include his design for the Burkina Faso National Assembly in Ouagadougou; the Léo Surgical Clinic & Health Centre (2014) in Léo, Burkina Faso; IT University in Burkina Faso; the Lycée Schorge Secondary School (2016) in Koudougou, Burkina Faso; and Xylem (2019), a gathering pavilion for the Tippet Rise Art Center in Fishtail, Montana.

For its remarkable success in combining socially engaged and ecologically resilient design, Kéré Architecture is the recipient of numerous awards, including the Global Award for Sustainable Architecture (2009), the Marcus Prize (2011), the Global LafargeHolcim Gold (2012), the Schelling Architecture Foundation Award (2014) among others. In 2017, Kéré received two prominent honors, the Prince Claus Laureate Award and the Arnold W. Brunner Memorial Prize in Architecture from the American Academy of Arts & Letters, for which he was praised for being “an alchemist working with local materials and technology to design buildings of meaning and beauty.”

The boundary-pushing architectural practice championed by Kéré has attracted the attention of exhibition makers and curators, allowing him to oscillate between the realms of architecture and art. Commissions have included the Serpentine Pavilion (2017) – as the first architect of African descent to receive it; a visitors pavilion for the Coachella Valley Music and Arts Festival (2018); showcases at the Venice Biennale of Architecture (2016 & 2018); and various solo exhibitions, including at the Museo ICO in Madrid (2018), the Architekturmuseum in Munich and the Philadelphia Museum of Art (both in 2016). His work has been selected for group exhibitions such as: “AFRICA: Architecture, Culture and Identity,” at the Louisiana Museum of Modern Art, Humlebæk (2015); “Small Scale, Big Change: New Architectures of Social Engagement,” at the Museum of Modern Art, New York (2010); and “Sensing Spaces,” at the Royal Academy, London (2014).

A current project, the Benin National Assembly in Porto-Novo, is designed to embody the identity of the people it serves. Kéré said, “This project gives shape to our ideas about community gathering, the importance of indigenous forms of governance and what contemporary African architecture can be on a national scale.” The government building includes an adjacent park that can be used by city residents as a central recreation space, creating a sense of openness and transparency, while expressing the democratic values of the people of Benin. 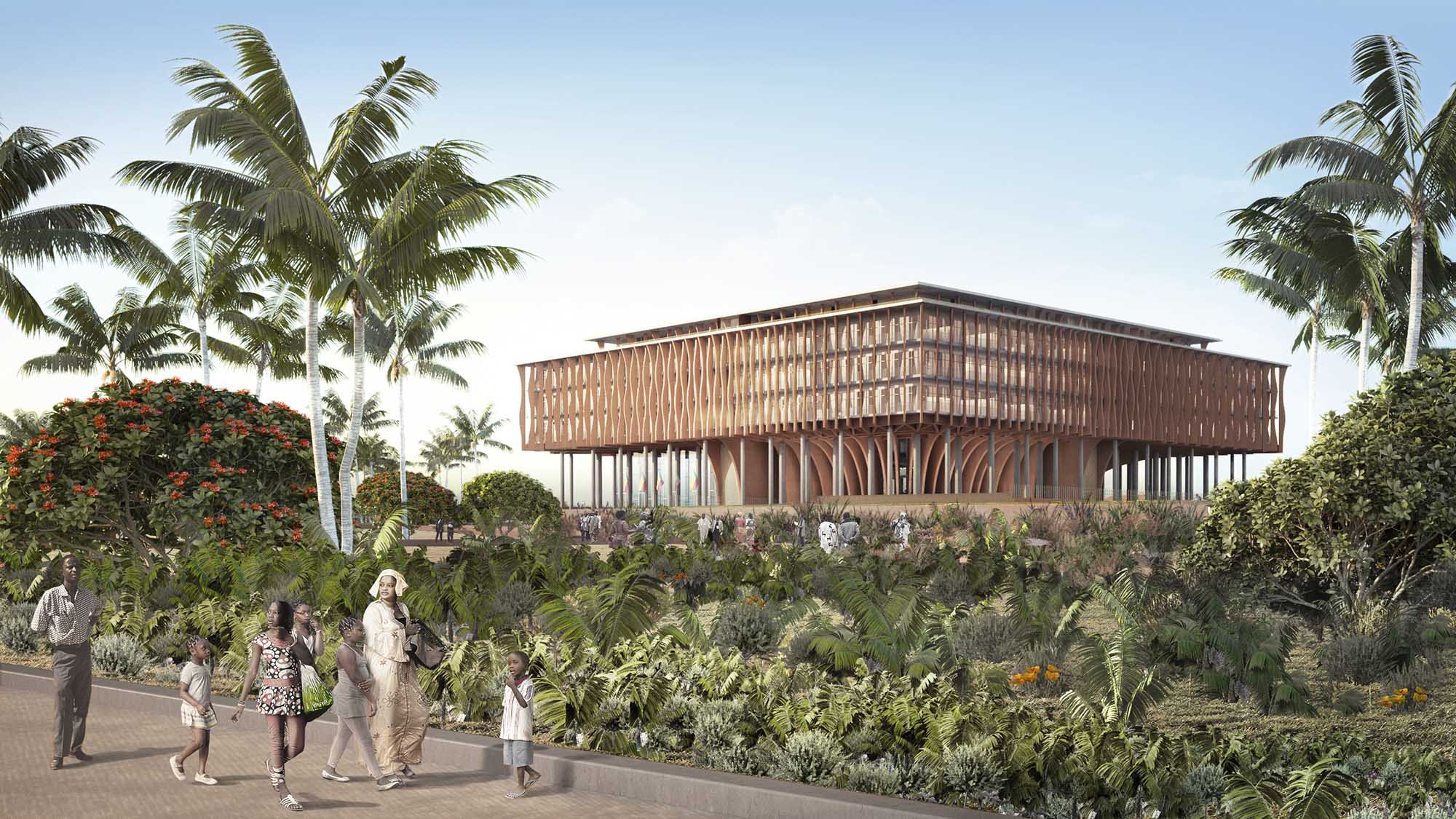 One of Kéré’s current projects is the Benin National Assembly in Porto-Novo, including both the government building and an adjacent public park. (Image courtesy Kéré Architecture)

This project evokes the values inherent in the inspirational work of Kéré and his expertise in tackling complexity with understated elegance across scales and contexts. As School of Architecture Dean Ila Berman said, “Beginning with Francis Kéré’s original work in Gando and throughout his acclaimed career, he has not only taught the world that architecture and education are for everyone, but also has exemplified how architecture can build capacity in communities, foster environmental and cultural resilience, and inspire creativity while immeasurably serving the public good.”

On the anniversary of Thomas Jefferson’s birthday, April 13 (known locally as Founder’s Day), the University of Virginia and the Thomas Jefferson Foundation at Monticello join together to present the Thomas Jefferson Foundation Medals to recognize achievements of those who embrace endeavors in which Jefferson, the author of the Declaration of Independence and third U.S. president, excelled and held in high regard. These medals are the highest external honors bestowed by the University of Virginia, which grants no honorary degrees.