David J. Getsy is an art historian, art writer, and curator whose research examines the changing investments in the human …

In 2019, the UVA Library proposed a project to the Cornerstone Program to pilot an Art in Library Spaces program. The …

Reading an article about a famous computer-generated scene in the Hollywood film “The Matrix Reloaded,” University of Virginia art history …

Sophia Kedzierski, a second-year student at the University of Virginia, walked into Madison Hall without an appointment last fall and asked …

Take a Trip Through the Witty, Wicked Imagination of Artist Patrick Oliphant

From a watercolor of President H. W. Bush depicted as Mary Poppins to President Barack Obama drawn and sculpted as …

7 Hoos at Moma Share Their Favorite Parts of the Museum

Just a few years ago, Stephanie Katsias and Jessie Cappello were classmates at the University of Virginia, studying how the …

A new book and website tell the story of a small group of Aboriginal artists from Australia who changed the face of global art history – and the resources were produced by the only museum dedicated to Aboriginal Australian art in the United States, the University of Virginia’s Kluge-Ruhe Aboriginal Art Collection.

The book and virtual exhibition accompany an in-person exhibition at Kluge-Ruhe and chart the artists’ movement that began in 1971 in the township of Papunya, in Australia’s remote central desert. Motivated by the artists’ desire to preserve and transmit their cultural knowledge in the face of great adversity and displacement, the movement quickly grew into an artistic renaissance that has also served as a powerful medium for economic and social justice.

The township of Papunya was founded in 1959 as a settlement for Aboriginal people who were relocated from their homelands. It drew together Aboriginal people from a disparate range of language groups: Luritja, Pintupi, Anmatyerr, Warlpiri, and Kukatja. Some had considerable experience with white Australians; for others, life in Papunya represented their first encounter with colonizers.

Inside this bubbling, cross-cultural cauldron, a small group of men began to paint their ancestral designs onto scraps of cardboard, linoleum, and Masonite.

From these humble beginnings, the artists eventually began creating the epic, abstract paintings that travel the world today. A multi-million-dollar industry emerged, creating a powerful voice for Indigenous artists.

“Painting is a medium for the expression of relationships, of memory, of sadness and of joy, and also of one’s relationship to the country,” said Fred Myers, anthropologist and Silver Professor of Anthropology at New York University, who began working with Aboriginal artists in the early 1970s.

Artist Joseph Jurra Tjapaltjarri said, “This is for all the people in America looking at the pictures, all the canvases: Kulila (listen), this is our ‘Tjukurrpa, martupura Tjukurrpa’ (important business) from the old people, men and women.”

The comprehensive catalog and online exhibition, “Irrititja Kuwarri Tjungu | Past & Present Together: Fifty Years of Papunya Tula Artists,” not only showcase the work of artists working at Papunya Tula Artists company, but also reveal much of Kluge-Ruhe’s collection of 2,200 objects that has never been published. The accompanying in-person exhibition will be on view at Kluge-Ruhe through February 2023. [Interested visitors can make a reservation here.]

Henry Skerritt, curator of the Indigenous Arts of Australia at Kluge-Ruhe, and Myers, co-edited the book, which is being distributed by University of Virginia Press. Australia’s ambassador to the United States, Arthur Sinodinos, came to Charlottesville Nov. 18 to mark the publication’s release during a private reception at the museum. 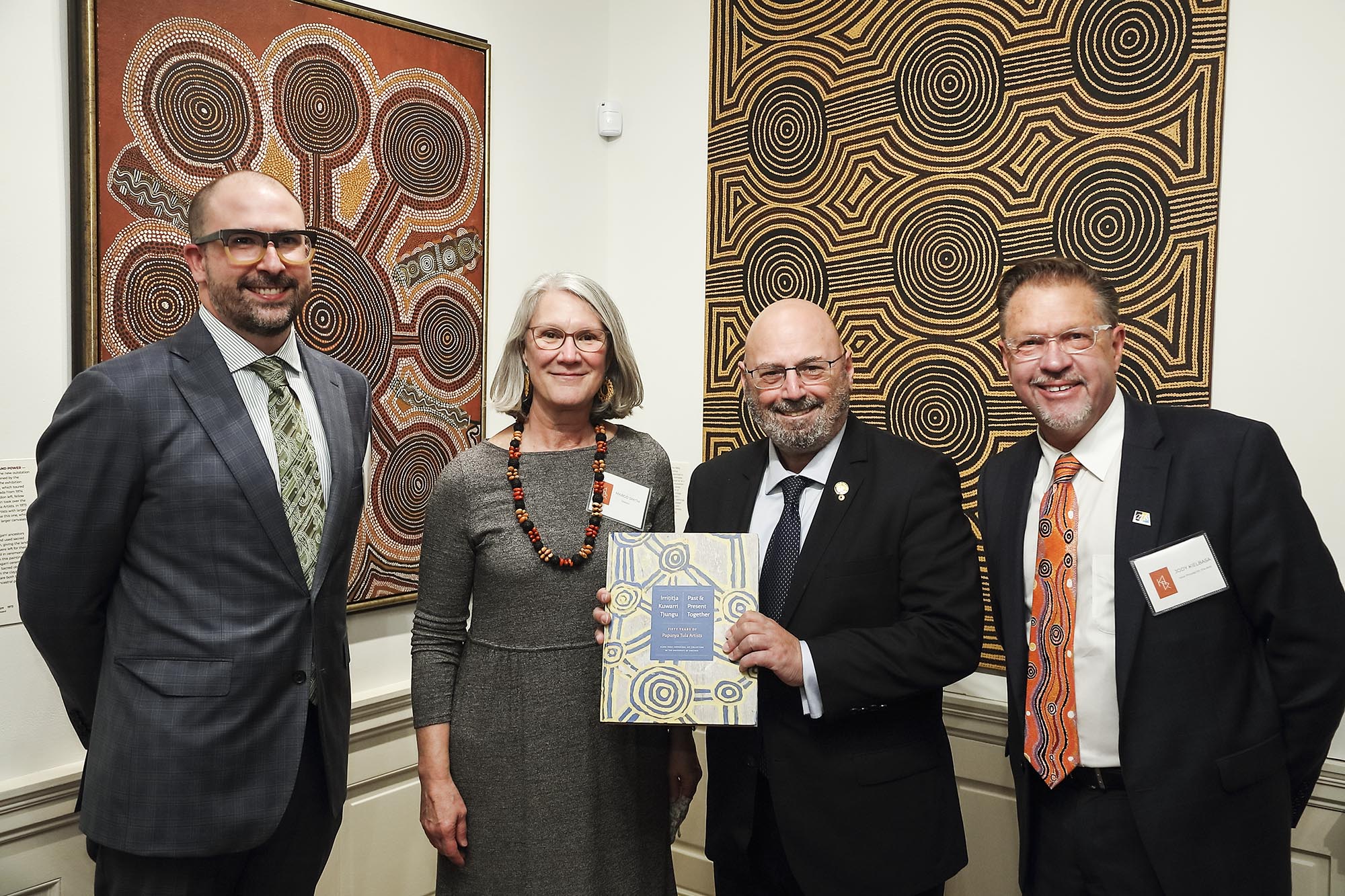 At the book launch in November, curator Henry Skerritt, director Margo Smith, and, right, Vice Provost for the Arts Jody Kielbasa, welcomed Australia’s Ambassador to the U.S., Arthur Sinodinos, to the museum. (Photo by Tom Cogill)

Partners who contributed to the research, exhibition, and publication attended the reception, Kluge-Ruhe’s first hybrid event. Students in Skerritt’s seminar on Aboriginal Australian contemporary art gave brief “flash tours” on works of art in the exhibition. Vice Provost for the Arts Jody Kielbasa, Sinodinos, and Skerritt spoke about the book and project. Five contributors joined them virtually from the U.S. and Australia: Myers at NYU, comedian and actor Steve Martin, John Kean, Marina Strocchi, and Papunya Tula manager Paul Sweeney, each of whom spoke briefly about their involvement.

The book offers more than 150 color plates depicting artworks, plus essays by an extraordinary array of artists, curators, scholars, and collectors, including a contribution by Steve Martin, who began collecting Aboriginal art in 2015; and original research and consultation with artists and their descendants from John Kean, who served as manager of Papunya Tula Artists during the 1970s.

The website allows visitors from anywhere in the world to explore the art and artists in the exhibition. This resource brings the breadth of the exhibition to light in a virtual gallery centered around five central questions about the story of the artists and their work. While it is designed to be accessible for the student, the scholar, and the casual visitor with a budding interest, it also includes lesson plans for teachers, produced in partnership with the Art Gallery of South Australia.

Now having operated for 50 years, Papunya Tula Artists is one of the oldest and most successful Indigenous-owned companies in Australia. Artist Bobby West Tjupurrula remarked, “It’s going to be a really good celebration for ‘Anangu tjurtangku’ (all the Aboriginal people). All around Australia and in the museum in America, which is a good thing, because Papunya Tula has never failed. It’s still going.”

After it closes at Kluge-Ruhe, “Irrititja Kuwarri Tjungu | Past & Present Together” will be the premier exhibition when the newly constructed Embassy of Australia opens in Washington, D.C. in March 2023.