It’s magical – the limitless, untouched wilderness seen from a plane,” Acacia Johnson said of the experiences of nature she …

“This is one of my favorite pictures,” Prof. William Wylie said as he addressed the robust crowd, which had gathered …

Take a Journey Through Pompeii with Photography Professor William Wylie

Each time University of Virginia photography professor William Wylie returns to Pompeii, he finds something new to awe, humble or …

This Student’s Superpower is Photography

Sarah Dodge says photography is in her blood. The third-year University of Virginia student is a media studies major and a …

The LOOK3 Festival of the Photograph features artist talks and exhibitions by legendary photographers, as well as outdoor projections, free …

#UVAPhotoContest Showcases Life on Grounds as the Year Winds Down

Each year, the #UVAPhotoContest captures the most picturesque locations on the University of Virginia’s Grounds through photos posted on Instagram. …

A Lifetime in the Making

The moment that University of Virginia alumnus and novice astrophotographer Brennan Gilmore had spent months researching, planning, and dreaming about had finally arrived. Backed all the way up against the doors of Cabell Hall one late July night, Gilmore had the Rotunda, the sky, and – with any luck – the Heart and Soul Nebulae squarely in his sights. Nothing was going to stop Gilmore from capturing the photo of a lifetime.

That is, until Gilmore looked through his viewfinder and saw the head of the Homer statue smack in the middle of the frame.

Gilmore, who had already stepped back on the South Lawn as far as he possibly could, wasn’t exactly sure how to proceed – but he eventually found the solution by extending his camera tripod to its maximum height.

With Homer literally out of the picture, Gilmore proceeded – over a three-night span – to get the 124 shots he needed for a spectacular, one-of-a-kind mosaic that UVA Today senior photographer Sanjay Suchak said just might be the most interesting photo of the Rotunda he’s ever seen.

“The Rotunda is perhaps the most-photographed location in Central Virginia, so seeing a new and interesting photo is quite a rarity,” Suchak said. “Brennan’s shot combines a classic nighttime view of the Rotunda with a perfectly timed photograph of the nebulae that could only happen when an excellent photographer with a keen knowledge and expertise with astrophotography planned this perfectly.” 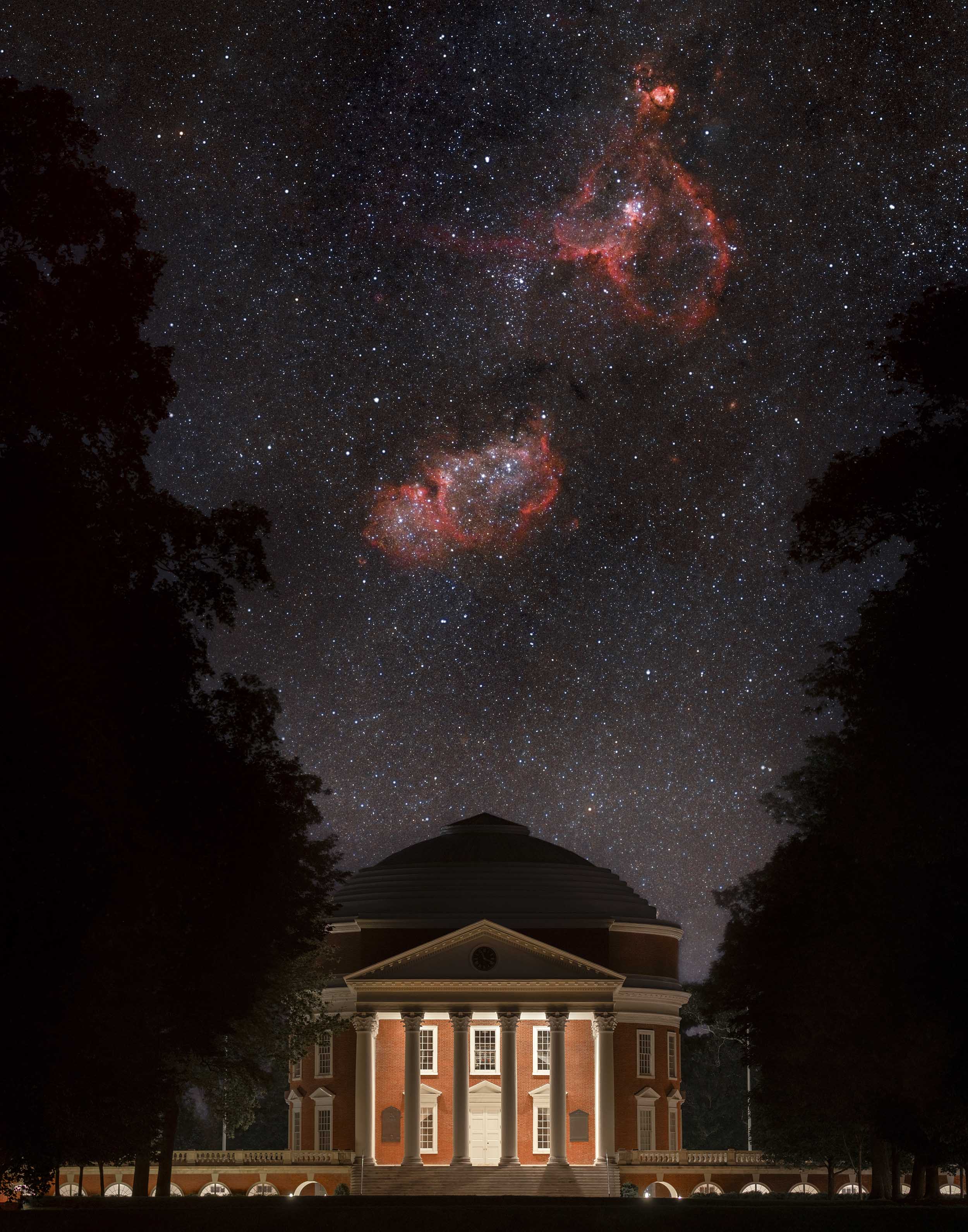 Over a three-night span last summer, alumnus Brennan Gilmore captured the 124 shots he needed for this one-of-a-kind mosaic. (Photo by Brennan Gilmore)

Gilmore, who since graduating from UVA in 2001 has served as a United States foreign service officer, chief of staff for Tom Perriello’s campaign for Virginia governor and as an adjunct professor at James Madison University, is currently the executive director of Clean Virginia, a nonprofit environmental organization in Charlottesville.

It was during the pandemic when Gilmore, suddenly with a little extra time on his hands, waded into astrophotography, a field in which he had been interested since taking an astronomy course as an undergrad.

From the get-go, Gilmore realized that he enjoyed mixing the nighttime sky and terrestrial landscapes in his photos. “I’m really drawn to those because it marries the cosmic with the terrestrial and sort of shows how we’re basically floating on a spaceship through space, and you can see a little bit of Earth and a little bit of the stars as well,” Gilmore said. “I got really into taking those types of shots – shots that show a beautiful landscape with the Milky Way above it, or people and then the stars above.”

Gilmore became interested in nebulas – the bodies of interstellar clouds that can consist of cosmic dust, hydrogen, helium and molecular clouds (possibly as ionized gases) – and discovered that the Heart and Soul Nebulae would be lining up perfectly in the sky above the Rotunda in the late summer.

Last spring, Gilmore started planning how he would go about taking a photo of it. The Heart and Soul Nebulae, discovered in 1787 and 1848, respectively, are located in the Cassiopeia constellation, some 7,500 light-years from Earth.

“These are not photos you can take just by pointing your camera and clicking,” Gilmore explained. “You have to build these photographs, almost like a painting. I had to shoot the sky separately from the ground because the Earth is spinning very fast and the stars aren’t …

“You have to shoot the sky above and then shoot the land, and then blend these photos together to have a representative image of what the sky would look like if human eyes were able to see that light there.”

Using his 180-millimeter lens, it took Gilmore roughly four hours of exposure to shoot the sky, with the camera’s shutter needing that much time to collect enough light. He returned the next night to shoot the Rotunda and Lawn separately. Then, using algorithms on his computer, he “stitched” together 124 images that were “stacked” on seven panels.

“You have all this data from the sky that you have to process so it can reveal what’s there,” Gilmore said. “That’s one of the reasons I love astrophotography because it’s kind of uncovering something that you can’t see on the surface. The Rotunda’s right in the middle of town and you can’t see the Heart Nebula, and you can’t see that many stars. …

“Where the magic happens is that you can take the values of the light pollution that isn’t coming from space and subtract it from the image, thus revealing the hidden treasure underneath.” While today’s photography software is capable of creating just about anything you can dream up, Gilmore said he went to great lengths not to do that.

“These are actual photons that are in the sky over the Rotunda – most of the year actually – because the Heart and Soul Nebulae is in the northern sky near Polaris, and so there is part of the year where it goes below the horizon, but it’s over there right now, [though] it’s much, much higher in the sky than it is in the late summer.

“Every night, Heart and Soul is directly above the Rotunda at some point.”

A funny thing about Gilmore’s project: In the end, Homer actually proved helpful. Gilmore used the statue’s head to triangulate his position, ensuring that all of his shots were being taken from the exact same spot. The final result hangs proudly in Gilmore’s living room. “I wanted it to look how it would look if you were sitting on the Lawn and you had perfectly dark skies and the ability to capture light in your eyeballs like an owl,” said Gilmore, with a laugh. “It’s exactly how I envisioned it.”

To purchase the print or see more of Gilmore’s work, click here,