The Maxine Platzer Lynn Women’s Center at the University of Virginia has been challenging stereotypes since it opened in 1989, especially stereotypes about who represents what a UVA student is.

The Women’s Center (renamed in 2017, thanks to the generous support of Maxine Platzer Lynn, a 1951 alumna of what is now the School of Education and Human Development) was created to offer more resources and programs to women at UVA and in the community – especially students, of course – and to foster leadership and work on gender justice. Today, its programs include mentoring and outreach to boys and young men, as well as to girls and young women.

The influx of undergraduate women beginning in 1970 (and a small number of courageous women in graduate programs, education and nursing before them), along with the increasing presence of Black students and other minorities, challenged the earliest stereotype of “THE” student at “The University” – the privileged, Southern young white man depicted in an 1853 drawing.

When an alumna suggested reimagining that old drawing and exploring “Who are UVA students today?,” Women’s Center director Abby Palko said the Women’s Center team was immediately excited to do something that would yield a spectrum of responses. Holding an arts and writing competition has been an ideal way, Palko said, to involve current students in the Women’s Center’s work to commemorate the 100th anniversary of the women who attended select programs and the 50th anniversary of full coeducation over the 2020-21 academic year.

The center called on the UVA community to “(re)present – and celebrate – myriad student experiences on Grounds with their own images.” With the help of the UVA Arts office, especially Emma Terry, programs and communications director in the Office of the Vice Provost for the Arts, and other colleagues, alumni and community members, four teams of judges looked at submissions in the categories of 3-dimensional art, 2-D digital images, film and writing.

The artwork submitted in a range of media expresses a lot of different things, but one thing is clear: There really is no “THE” student on Grounds.

“It’s been such a joy to witness the deeply serious and thoughtful approaches that (re)present participants have taken to grappling with the prompt: ‘Who is the 2021 UVA student?’” Palko wrote. “The artistic renderings that express their understanding of today’s students are stunning, both in impact and in range of media. Collectively, the exhibit offers a powerful testimony to the questions of identity with which students are engaging.”

Added Mary Esselman, editor of the center’s online journal, Iris, writing about displaying some of the competition entries: “Here at the Women’s Center, we have been (re)presenting the images and stories of students over decades of changing needs and environments at UVA. Keeping pace with the times – and pushing the times to change faster – has always been part of our student support mission.”

Matt Weber, senior assistant to the UVA president, was one of the judges for the writing category, and said, “The excellence and depth of writing that the UVA community displayed through this competition was very impressive. I commend the Women’s Center for creating this important space for the written word – and all those who submitted for making time to share their stories and craft during this extraordinary year.”

“This exhibit brings work that originated in lecture halls, studios and archives together with personal mementos and musings, enriching our sense of what it means to live and learn in an historic place at a time of reckoning,” according to the website.

“We consistently see the challenges students face and the strengths they bring to these challenges,” Palko said. “We know there are corners where vulnerabilities tend to hide in our community. We’re so grateful to the participants who offer us glimpses into those more private moments.

“As you will see when you view the entire gallery, (re)present spotlights the creativity and resilience that art helps people express,” she said. “I looked at submissions as they came in, and in their individual categories for the judging process. But it was when I first saw them all assembled in the online gallery that I truly absorbed their collective, communal power.”

The artwork shows some of the thoughts and feelings students have for their families and friends. Students who go after opportunities at UVA with enthusiasm, thoughtfulness and creativity. Students who embrace past and present. Students who struggle with finding themselves, show incredible strength and resilience, and embrace their authentic selves.

In fact, the honesty about struggling with mental health or other issues prompted this note to be added: “As this exhibit includes works addressing mature themes, viewers are encouraged to approach and share these works with care for themselves and each other.”

Below are some of the winning pieces with the artist’s remarks. 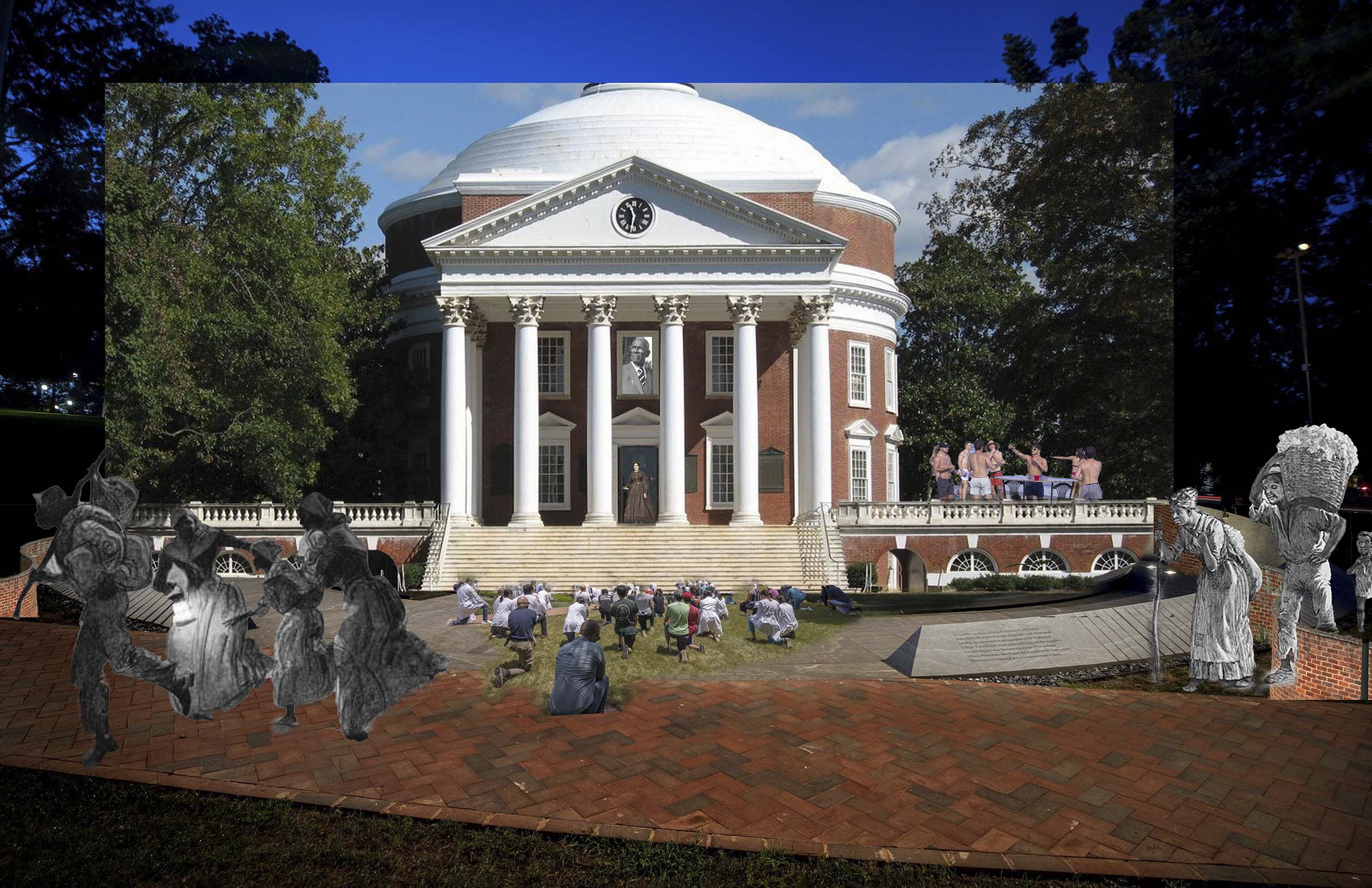 First place, 2-D image, by architecture student Brandon Eley, who wrote: “As a Black student at UVA, I and many others deal with two identity issues – feeling that we have to prove our belonging here and having to prove we are ‘Black enough.’ This collage (re)presents the diametrically different experiences students have at UVA. We have the option of responding to this history to create a brighter and more united future. Or, we can ignore the things of the past as if they have no effect on our reality or the lives of others. At the end of the day, the choice is that of the individual, but the consequences are felt by all.” 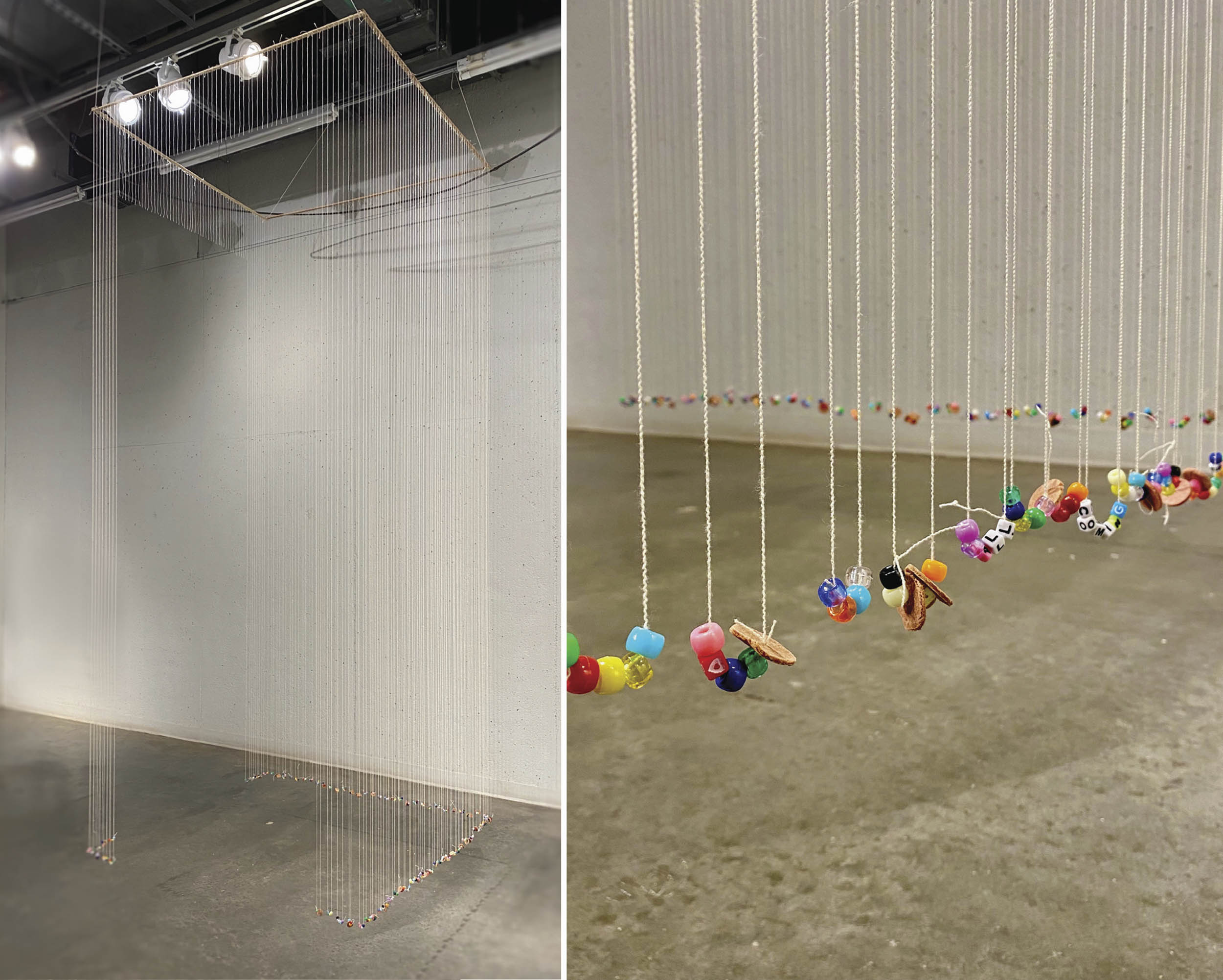 First place, 3-D image, by Aunspaugh Fifth-Year Fellow Isabella Whitfield, who described this work, “Again, with feeling,” writing: “Canvas strings are tied to a scrap wood frame, arranged to mimic the interior of a passageway. Hanging from each canvas string is an assortment of friendship bracelet beads and unwrapped haw flakes, a candy made from hawthorn. Over time, strings become entangled, transitioning from order to disorder. Untangling the piece requires a kind of ritualistic maintenance, demanding commitment, patience, and care. As an abstracted self-portrait, this installation draws on the themes of familiar objecthood, evolution, and renewal.” 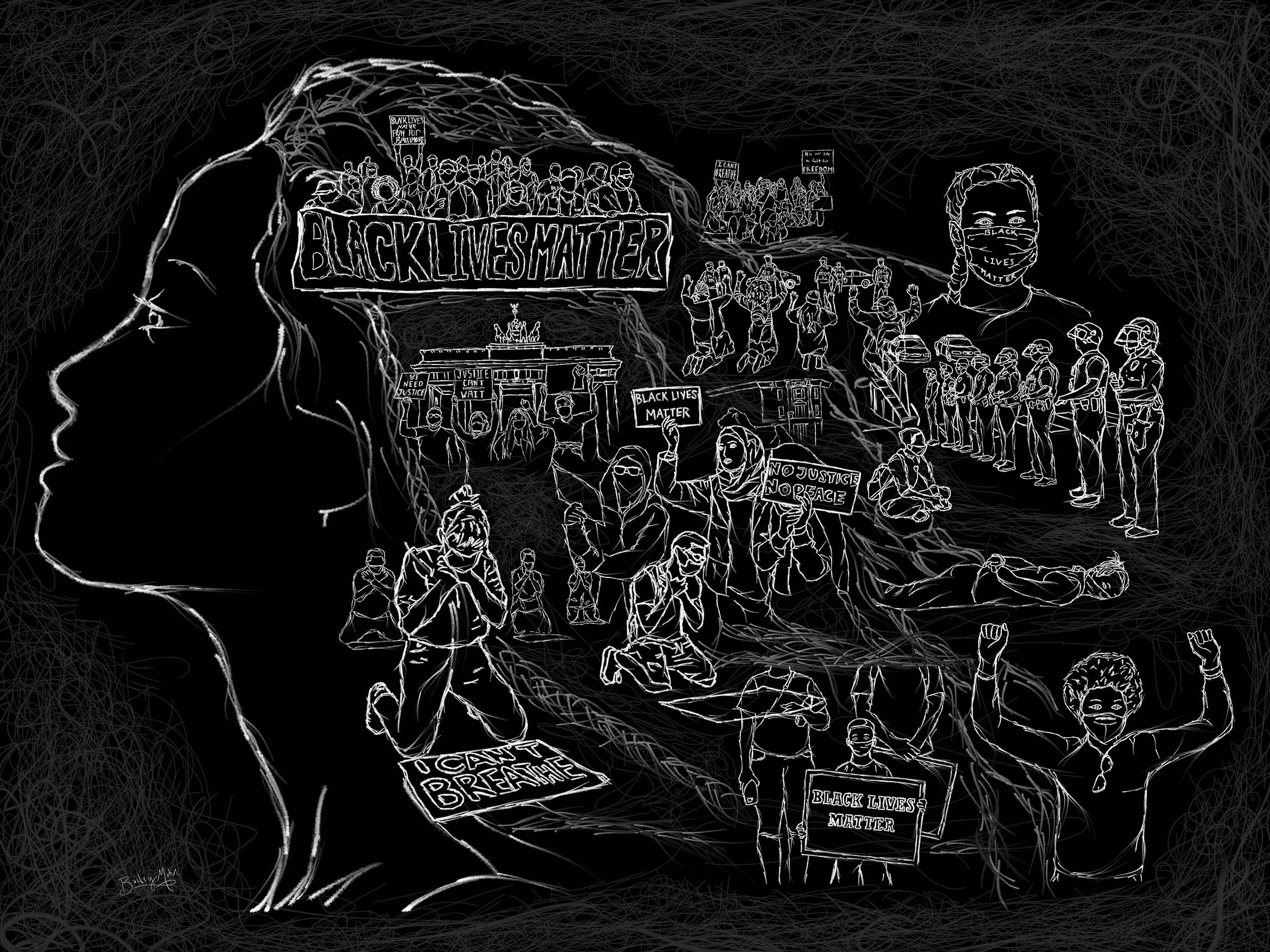 Second place, 2-D image, “Textured Hair” by McIntire School of Commerce student Bailey Mohri, who wrote: “The pandemic forced UVA students to face life in America for people of color: police brutality and racism in broad daylight broadcasted across national television. … Reconciling the University’s history, we carry the shadow of racial adversity with us, making it part of our identity. But what makes us UVA students is that we affirm Black Lives Matter by taking that identity and turning it into purpose. My work illustrates the mosaic of experiences, struggles, images, memories, and resilience woven into our community’s textured hair, becoming part of each and every Wahoo.” 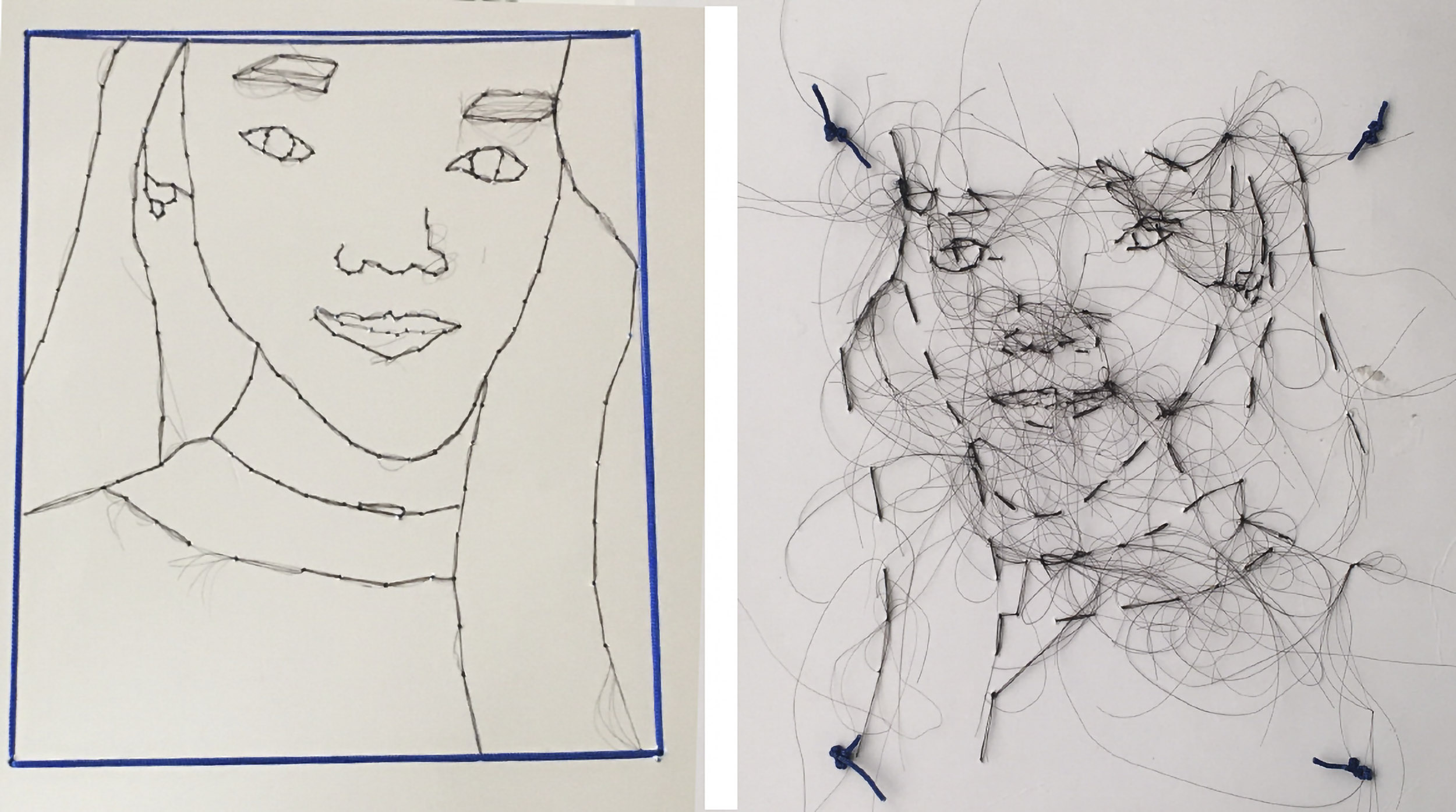 Second place, 3-D, “untitled self portrait” by Kaitlyn Hyun, who wrote that she learned to embroider during the pandemic and intentionally stopped looking at her own image “in the hopes of growing in self-forgetfulness and focusing more on others. I’ve also been growing out my hair in the hopes of eventually donating it. … I decided to try embroidering the last selfie I have before I started the challenge with my hair on reflective cardstock. Most ‘threads’ are six hairs thick. I like how the back is very messy and doesn’t make a lot of sense, but that’s like in life.” 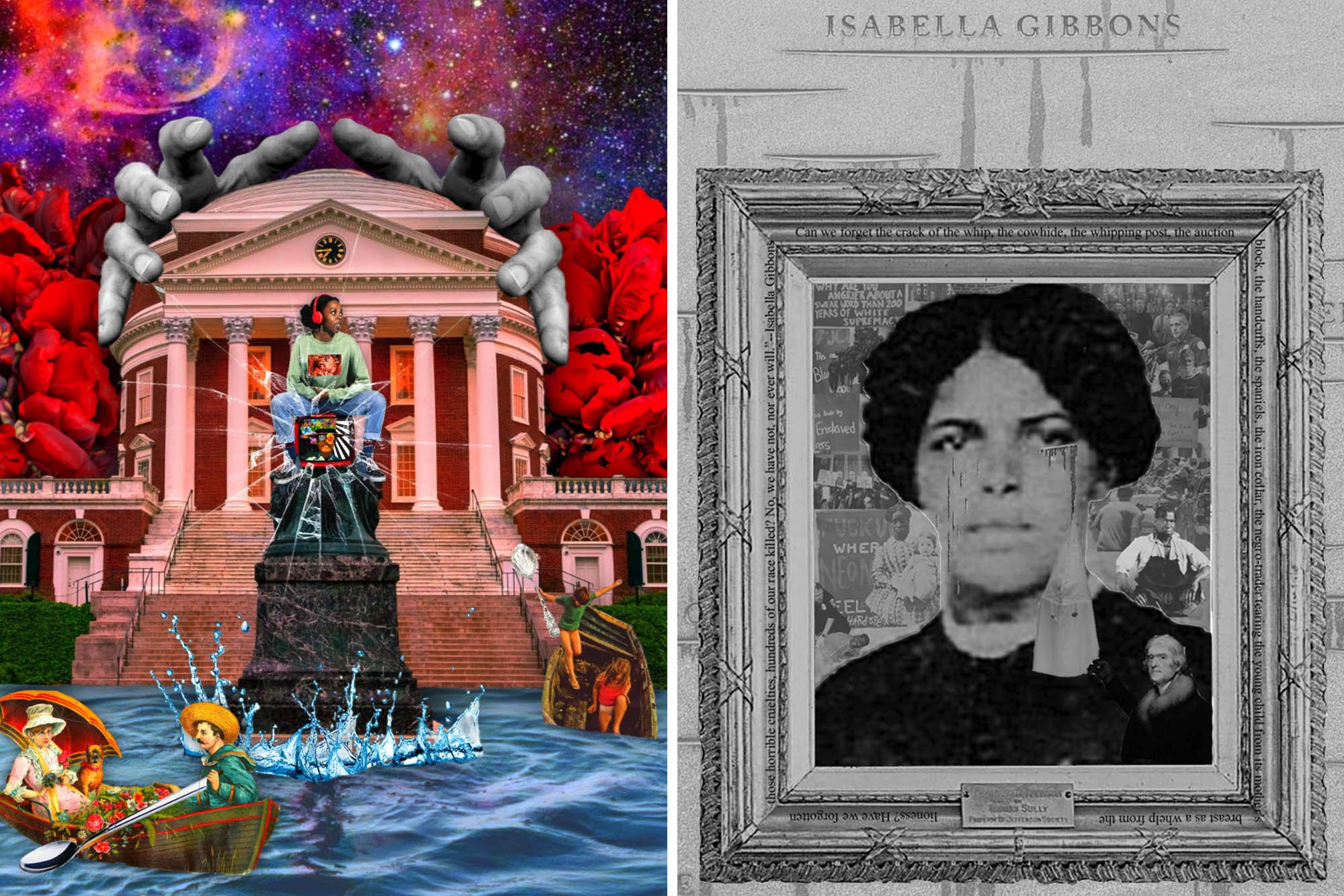 Given honorable mention in the 2-D category, Lily Roberts, on right, made this digital collage, writing: “As a Black student in a post-Aug. 11 and 12 UVA era, I have seen the slow unraveling and (re)framing of the legacy of Thomas Jefferson. … This collage physically (re)frames a portrait of Jefferson that hangs on a hall of the Rotunda, (re)centering Isabella Gibbons, who contributed more to the University than we will ever know.” On the left, about the image titled “The Silver Spoon’s Lament,” Ryan Doerr wrote that it “is a representation of UVA’s history, which has long been home to both the oppressor and the oppressed. … Thomas Jefferson has been replaced with *my* reimagining of today’s UVA student: a [Black, indigenous or person of color] woman who threatens the white supremacist systems that uphold this school, a drop in the ocean with the power to change its tides.”

In Kim Salac’s short film, “Myopia,” she says she “employs the act of doing laundry, in its habitual, cyclical mundaneness, to reflect a deep longing for a cultural heritage under the strain of constant, quiet erasure. Invoking two voices, mother and daughter, Tagalog and English, I choose to render this immigrant experience through the insecurities surrounding language, and its intimate relation to generational relationships. … This lived reality reveals a duality in my experiences of belonging.”