Jazz Master Helps Open the Ears of Students, So They Really Hear the Music

Listen. No. Listen. Put the phone in your pocket. Shut the laptop. Put on the headphones – headphones, not ear buds – shut …

No. Listen. Put the phone in your pocket. Shut the laptop. Put on the headphones – headphones, not ear buds – shut your eyes and LISTEN.

John D’earth is teaching music students to listen to jazz in his University of Virginia summer session course, “Hearing as Jazz Musicians Hear.”

D’earth, a senior lecturer in the McIntire Department of Music and director of jazz performance, is tall and slender, with a shock of silver-white hair. He is seemingly in constant motion, gesturing with his hands to illustrate his talk, shifting his body in the chair as if seeking a comfort denied him, tapping his feet and his hands, snapping his fingers to punctuate the rhythm of his sentences. 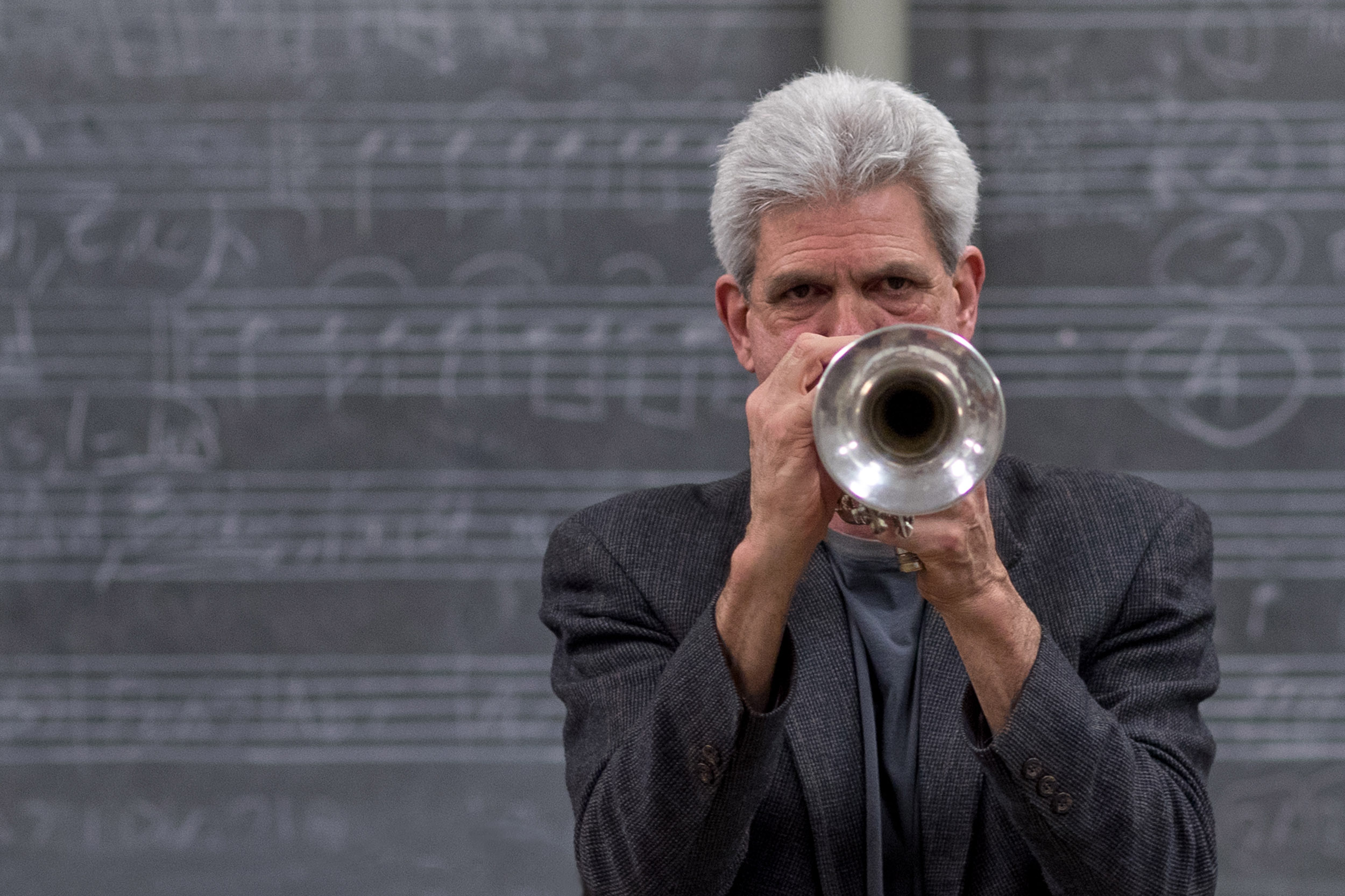 John D’earth is a well-known trumpeter and longtime director of jazz performance at UVA. (Photo by Sanjay Suchak, University Communications)

He said jazz musicians listen to records repeatedly, listening to phrasings, to solos, seeking out things that reach them. He cited author Robert Graves discussing the impact of good poetry. 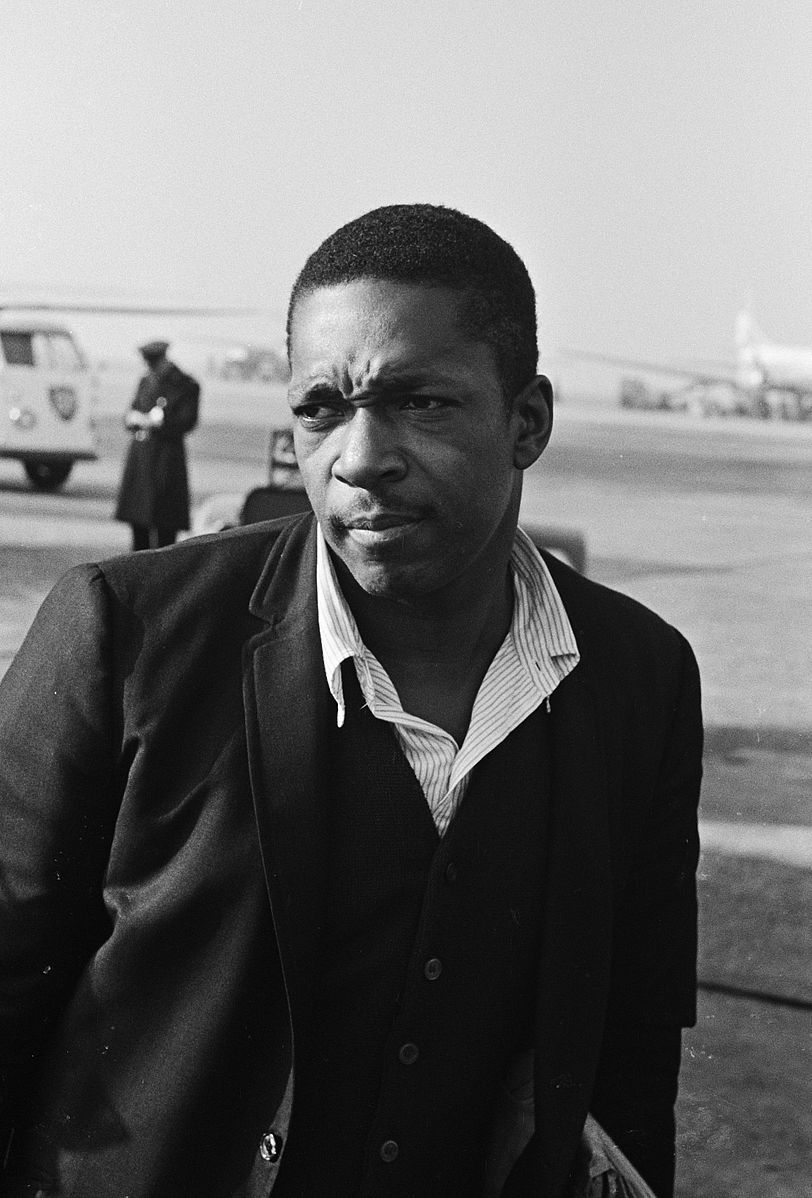 “Robert Graves said you can always tell real poetry by two things: it evokes the natural world and it makes the hair stand up on the back of your neck,” D’earth said. “That is jazz music. All of it. There is an emotional quality to listening to this music with other people who understand it that is an experience like no other. The question that comes to mind when you hear this a lot of times, if you are hearing it, is how in the hell did they get like that? How did they become that way? And my answer is, ‘By being that thing.’ I think total embodiment. Jazz.”

D’earth has a mind like a fireworks display. It shoots straight up in pursuit of an idea and then suddenly explodes into a shower of sparks as his thoughts race from one point of light to another. In discussing jazz, he cites noted jazz musicians such as Miles Davis, Louis Armstrong, Count Basie, Benny Goodman, Harry “Sweets” Edison and a constellation of others, but he also refers to other artists in other fields – Graves, Irish novelist James Joyce, American novelist Thomas Wolfe, William Shakespeare, E.B. White, painters such as Jackson Pollock – as well as histories of jazz and social histories, classical composers from Mozart to Beethoven to Hindemith, to Bob Dylan plugging in his electric guitar at the Newport Jazz Festival.

D’earth plays music in the classroom – original recordings, pulled from his computer and piped through the speakers in the room. He has the students stand and sing along with John Coltrane’s “Equinox,” syllables for notes, while following drummer Elvin Jones’ beat by slapping their hips, beating on their chests and snapping their fingers.

“When he has us do that little improvisation, that is something I never thought I would ever do or be comfortable doing,” said Kate Walz, a Charlottesville resident who is taking the course. “But’s he says, ‘Alright, just do it,’ and we just do it and it’s cool. I guess that’s learning, in a way. It feels like it. It expands my knowledge of whether you can or can’t do music, and this has taught me that yes, I can. I can do music.”

Thomas Castleman of Charlottesville, who has just graduated from St. Anne’s-Belfield and is a piano player specializing in jazz, said the course has lived up to his expectations and been more about musicianship than he anticipated.

“Seeing his approach to introducing musicianship to people from all kinds of backgrounds is really cool, because it is a way I would have never thought about teaching it,” he said, “taking complex things and introducing them in a way that doesn’t seem intimidating, so people are willing to do it. He shows that it’s OK to make mistakes. He makes a lot of mistakes in front of us, which I think makes it a lot more comfortable for everyone. You don’t feel you have to be good at singing, and I don’t consider myself a singer, but since I have started playing jazz, I realize it’s so important to sing, so I sing anyway even though I’m not good at it. That’s been cool.” 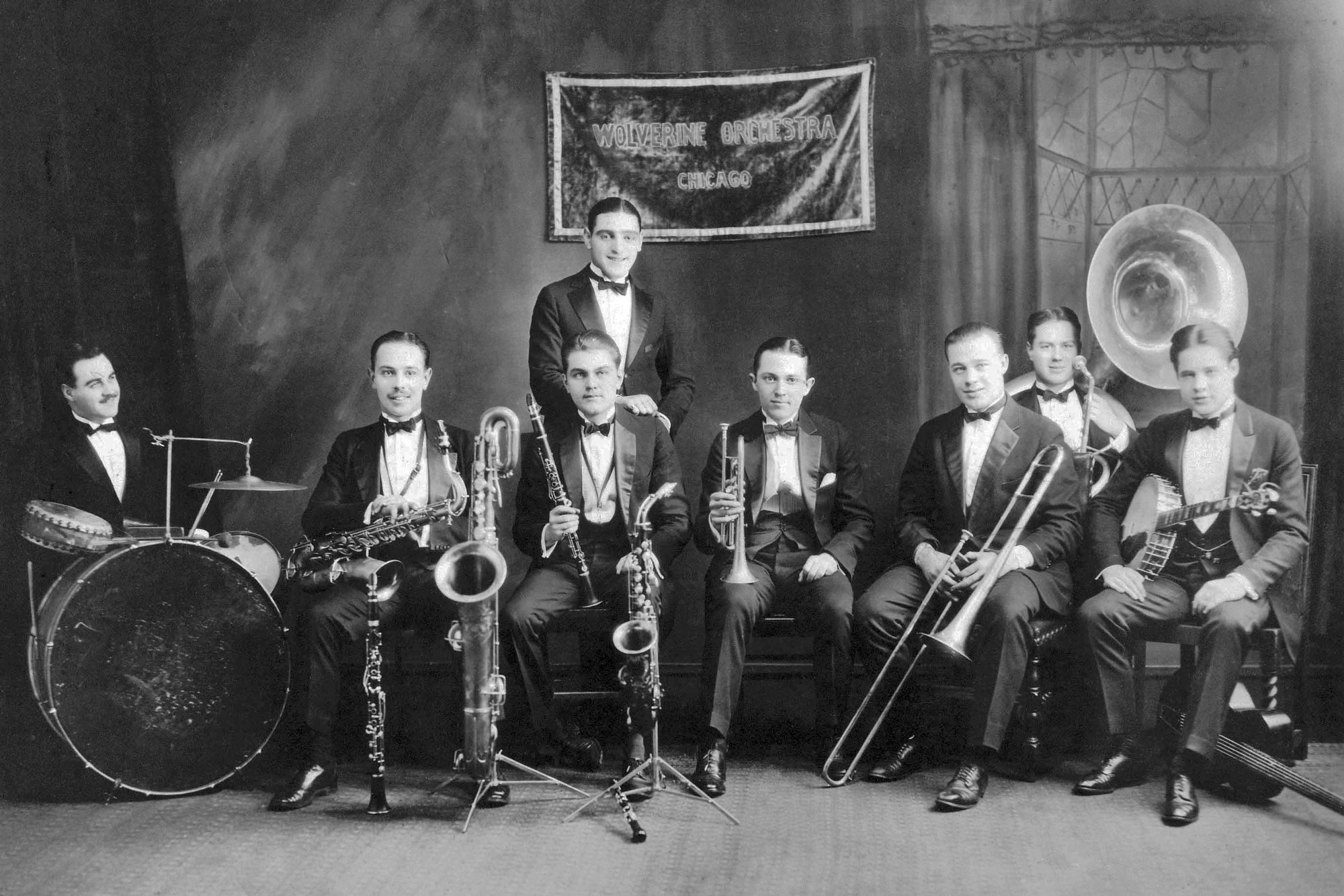 Bix Beiderbecke (center, with trumpet) and the Wolverines at Doyle’s Academy of Music in Cincinnati, Ohio, 1924. (Wikipedia Commons)

D’earth tells stories about the musicians, many of whom died before his students were born, explaining how their lives and times affected their music. He talks about who played with whom and when and how this sound changed and became that sound.

D’earth’s knowledge of jazz is encyclopedic, stretching back nearly 100 years to Louis Armstrong’s original recordings with the Hot Five and the Hot Seven, and Paul Whiteman and Bix Beiderbecke, but also skipping back farther into the past, talking about the music enslaved Africans brought with them to the New World.

“Jazz is the music of black America,” D’earth said. “But most American music is the music of black America. We have master jazz musicians of every race, color and creed, in every corner of this globe, and every note they play expresses ‘black lives matter,’ because the notes they play would not exist without black lives. It’s not appropriation, by any means; it’s evangelism. It’s a great gift from black America to the rest of the world. And we need to acknowledge the gift and understand the substance of the gift.

“Africa is the musical continent par excellence,” he said. “It doesn’t need to be explained. It’s a fact. … All Latin music is African-based. Everything we call salsa, cha-cha, merengue, any of that is African-based. But it sounds more related to African music than jazz does because in North America, slaves were denied music and they re-created music through the church and work.” 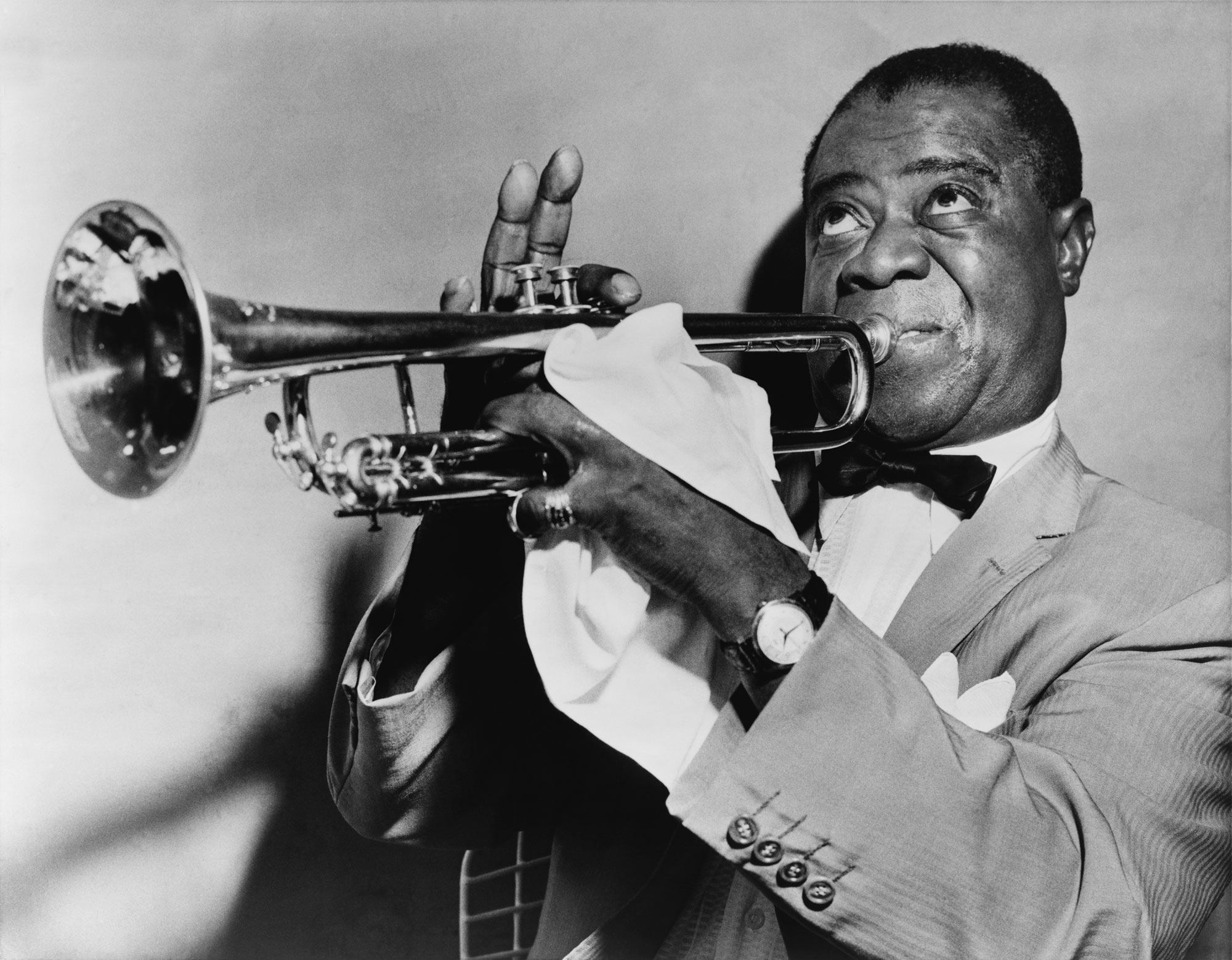 To D’earth, jazz has a visceral, deep biological quality to it.

This, D’earth said, is the key to music.

“We only have seven notes in the major scale,” he said. “We only have 12 chromatic tones. We have centuries of music based on those notes. All different. How do you make it different? Rhythm. Where you put it. Everything is rhythmic. Sometimes it is a beat pattern.”

He swings his right arm in an arc in front of him.

All of this factors into D’earth’s teaching: the history, the art, the nuance of the music.

And it is based on individuality. 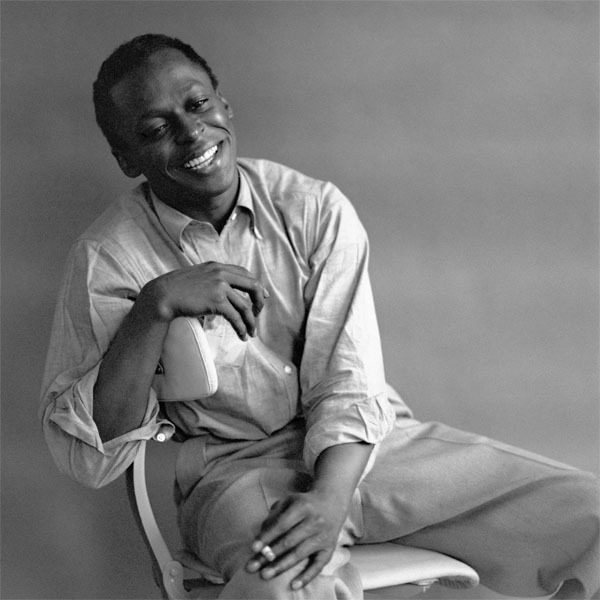 “Jazz gave music back to the musicians,” D’earth said. “Jazz teaches two things. Jazz teaches ‘own the music on your own instrument, in your own mind, in your own musicianship.’ The second lesson jazz teaches is Oscar Wilde’s encomium, ‘Be yourself. Everyone else is taken.’ The old jazz musicians said, ‘Tell your story.’ And they would actually be so offended if you were imitating somebody. I always warn my students that if they really want to play this music, they have to deal with themselves and they have to go to the music themselves, not have it mediated through some teacher.”

D’earth’s own musical education started with his father, who had an ear for the music, recognized reworking of old tunes and hated “phonies.” He loved Charlie Parker, while his contemporaries hated him.

His father started teaching him to play drums at age 2, and D’earth started with the trumpet at age 8. As he got good, really good, a certain teen-aged arrogance developed.

While thinking he was the center of it all, D’earth was out of step with many of his contemporaries because he rejected the work of John Coltrane, not liking it, thinking it noise.

“I am literally playing my Miles Davis record and picking the needle up over the Coltrane solo so I don’t have to listen to it,” D’earth said. “One night, I’m too lazy to get up and move this needle and his solo starts, which I had heard probably 20 times anyway and hated it, and it was like a conversion experience. I didn’t take it off this one night and BOOM! I heard it. And that’s when I learned what the difference was between hearing something and not hearing it.”

What he heard that night is not necessarily what anyone else listening to that piece of Coltrane would hear, because each person is different, nor is it the same for D’earth if he listened to that piece now.

“We are different every minute; everybody is changing every minute,” he said. “You are never the same. It is like a river. It is always the same; it is never the same. And that’s how people are, and that is why you can be disappointed by something that you thought you loved. And that is why, if you are not, after you have listened to something a thousand times, you know you’ve really got something.” 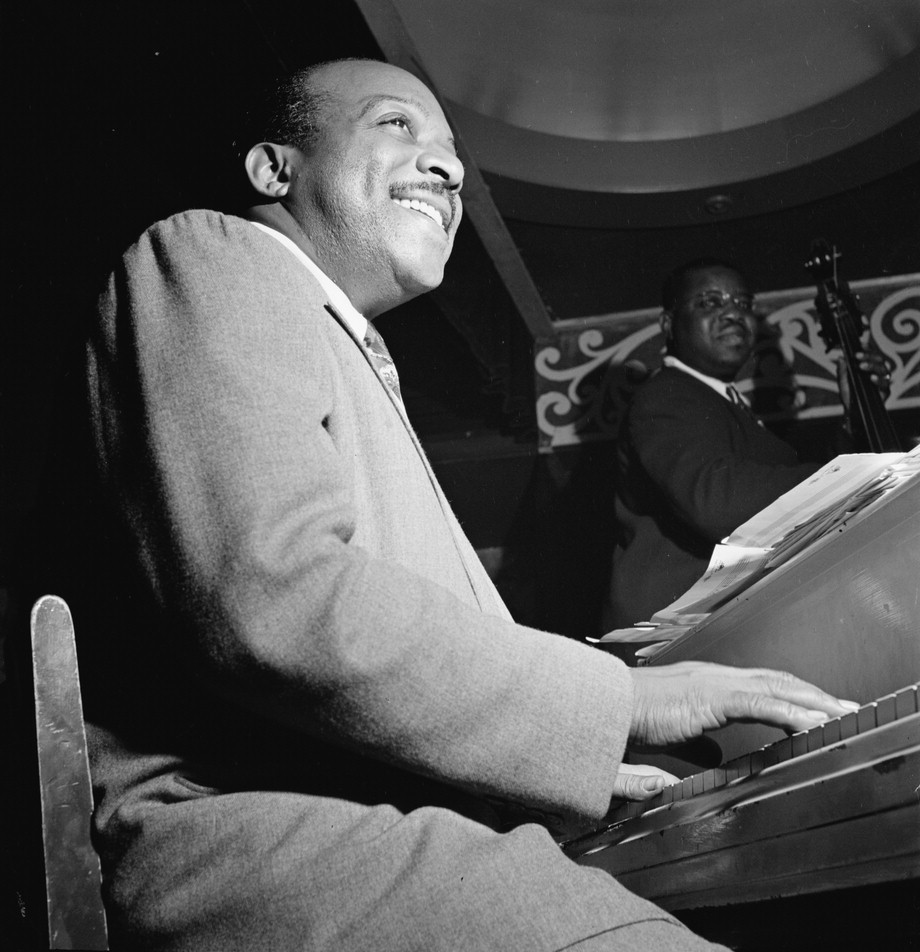 Portrait of Count Basie, Aquarium, New York, N.Y. Circa 1946-48. (The William P. Gottlieb collection at the Library of Congress)

“There is a Count Basie record that has been put out under various names, ‘Atomic Basie’ ‘E=MC2,’” D’earth said. “I’ve been listening to this record since I was 11 or 12 years old. I would have told you until a couple of years ago, ‘This record is perfect. There are no mistakes on this record.’

“How wrong was I? But the thing is, it’s still the greatest record and I don’t dislike it because of the flaws; I can just hear them now because I can hear better. They just got away with it on my untutored ear. But now I hear the trumpet player crack, the lead trumpet was weird, this was weird, they didn’t quite make that – doesn’t matter. The feeling is so there, it is so unified, it is there every second. It’s like seeing a beautiful edifice and saying, ‘Oh, this brick is chipped.’”

And while D’earth has trained his ear, he admits that innovators are usually pilloried initially.

“Miles always would change his music and everybody, including me, hated the new music until we didn’t,” he said. “We had to catch up with him.”