This moment represents a true sea change for our Creative Writing Program,” one of retiring English professor Gregory Orr’s students …

This moment represents a true sea change for our Creative Writing Program,” one of retiring English professor Gregory Orr’s students said recently. “Greg is the only constant it’s had for the past 44 years. [But] his legacy and his work isn’t going anywhere.”

Orr, who is stepping down after 44 years on the University of Virginia’s English department faculty, co-founded the highly regarded Creative Writing Program – which offers a Master of Fine Arts in poetry or prose – and served as its first director. In his teaching, he has combined a visionary sense of the significance of poetry, sprinkled with practical advice for living a writer’s life.

A current student of his, Bobby Elliott, who graduates with his M.F.A. on Saturday, expressed similar remarks April 24 as he introduced Orr before his teacher’s final poetry reading on Grounds as an English professor. 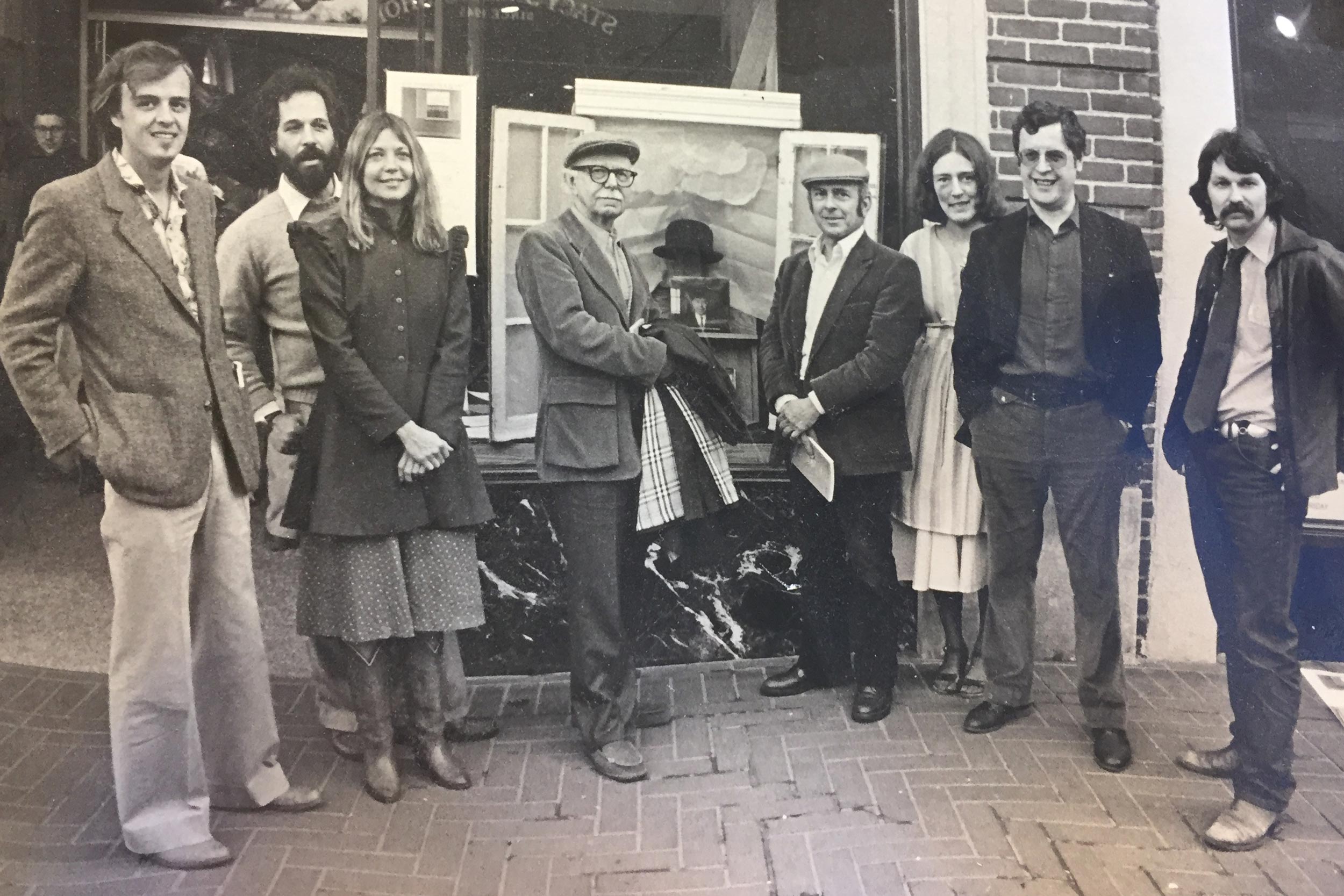 “What a gift it is to be his student,” Elliott said. “Daring to forge a life out of sorrow is perhaps Greg’s greatest subject, and it has single-handedly buoyed me and given me strength when I’ve needed it most.”

The next local opportunity to hear Orr read his poetry will be on June 18 at 7 p.m. at New Dominion Bookshop, where he will also sign his new book, “The Last Love Poem I Will Ever Write,” his 12thcollection of poems. Listeners can also hear him share some of his ideas on an upcoming podcast of Krista Tippet’s “On Being” show, to be aired on May 30.

Orr was recently cleaning out his soon-to-be-vacated Bryan Hall office, sorting books and papers. He said he loved teaching, and had poured all the experience, knowledge and ideas about poetry he had gathered over his life into his recent book, “A Primer for Poets & Readers of Poetry,” which came out last year.

“I loved working with young people for whom writing is urgent,” Orr said, “to keep their spirit alive through the chaos of late adolescence and this culture. You have lyric poetry, which for thousands of years, since the beginning of human culture, has dramatized and negotiated the self and what you’re going through.”

Orr also has urged his students to consider reading, as well as writing, poetry as a matter of survival. “I told my students the first day: Poetry won’t save your life if you are passive, but you can save your life by having an active relationship with poetry, by finding and cherishing and pondering those poems you most love,” he said in a 2005 interview in the journal, Image.

Orr has said in many interviews and other contexts that poetry saved his life. When he was only 12, Orr accidentally shot and killed his younger brother while hunting with his father and other brothers. No one in his family or small town in upstate New York was able to talk about it, or to help him through that horror and grief. A high school English teacher opened the world of poetry to him and eventually it gave him a way to live with himself and make something of his life.

At his April reading, Orr said that his brother’s death and that of his mother – who died two years later, when the family was living in Haiti – left him with “a loss of meaning” of the world, of his life. Since he published his memoir, “The Blessing,” and the nonfiction book, “Poetry as Survival” in 2003, when in his 50s, he has talked openly about the healing powers of poetry and creating art.

“Poetry is a form of creating meaning from the love, grief, joy and despair of life,” he said.

Along with poetry, Orr said the civil rights movement provided another path toward meaning, albeit one fraught with other forms of violence. Traveling alone after participating in protests in nearby Selma and Jackson, he was apprehended by vigilantes in Hayneville, Alabama in 1964. Apparently, they were looking for someone else, but when they saw civil rights pamphlets in his car, he was taken to jail and held in solitary confinement for seven days. He was allowed to keep a book of poetry with him, however.

In particular, John Keats’ poem, “Ode to a Nightingale,” sustained him, he said.

By the time he was in college, Orr knew he wanted to be a poet, although he wasn’t sure how a person made a living at it. He had transferred to Antioch College in Yellow Springs, Ohio, which required its students to get half their credits from work experience. Orr headed back to New York City and worked for film companies, synchronizing the footage and sound. Although he appreciated the family-like cooperative work of the crew, he said he needed more of a creative boundary to do his own art – time alone to write poems.

After he received his M.F.A. degree from Columbia University’s School of the Arts in 1972, he held a University of Michigan Society Fellowship for three years.

When UVA’s English department hired him in 1975, he had already published two volumes of poetry and was, as far as he knew, the only published poet on the faculty, although poets had previously visited for a semester or two. The University received a donation for creative writing from the estate of Henry Hoyns around 1980, and Orr recommended establishing an M.F.A. program. In addition to setting up fellowships for students, the gift enabled the department to expand the number of faculty: Charles Wright was hired in 1983, the same year he won the National Book Award for Poetry (he retired in 2010); Rita Dove joined the creative writing faculty in 1989, already a Pulitzer Prize winner.

The two-year program’s class size has remained small, creating close-knit groups, with 10 to 12 faculty members providing a lot of attention to about 20 students, half in poetry and half in fiction. The English department has offered undergraduate concentrations in poetry for almost 20 years and in prose for about five years.

Over the years, UVA’s M.F.A. program has developed a robust reputation, as the website, thebestschools.org, recently indicated. While acknowledging that ranking programs such as creative writing is “an inexact science,” it reported that UVA is among only four programs that have all appeared in top-10 rankings from U.S. News & World Report, Poets & Writers magazine and the Atlantic in recent years.

“We owe so much to Greg Orr,” the current director, Lisa Russ Spaar, recently wrote in an email. “He helped to create the University of Virginia M.F.A. program and, through his teaching, has contributed invaluably to the writing lives of many students who have gone on to teach and publish poetry themselves. In the 44 years of his teaching career at UVA, Greg has watched his brainchild grow into one of the top poetry programs in the world. His role in that evolution cannot be overstated.”

Spaar graduated with the first M.F.A. cohort in 1982 and also was an early student of Orr’s. She returned to UVA in 1993 after teaching at James Madison University and the University of North Texas. An award-winning teacher and poet, she started the English department’s undergraduate degree in poetry writing in 2000, and she recently became director of the M.F.A. program for the second time.

Other former students also said that Orr’s encouragement enabled them to take the crucial step they needed to become a poet.

Kate Daniels, Edwin Mims Professor of English and director of creative writing at Vanderbilt University, was a student of Orr’s at UVA before he founded the M.F.A. program. She followed in his footsteps and went to Columbia University to earn an M.F.A. after receiving her B.A. and M.A. from the UVA English department in 1975 and ’77, respectively.

“Prior to meeting Greg, I had only dared to think secretly, and with a kind of desperate hope, that I might be a poet,” she said, “and could devote my life – as he did – to reading and writing poetry. I have never forgotten the gentle intensity that he brought to that meeting, and the way it granted me silent permission and collegial encouragement to take myself as seriously as he seemed to take me.”

Daniels, who directs the M.F.A. program at Vanderbilt University, said, “It is a joy to me to regularly receive applications from talented undergraduate poets who have studied – as I did so long ago – with Greg Orr. Remarkably, they testify to very similar experiences, revealing how he has continued over the course of his career to touch young poets on a very deep, almost spiritual level.

“While his contribution to the canon of contemporary American poetry is inestimable, so, too, is his mentoring of younger writers,” said Daniels, who returned to the Grounds this spring as a visiting scholar in UVA’s Center for Biomedical Ethics & the Humanities.

Orr has written 12 poetry collections, several books of essays and criticism and his memoir, “The Blessing,” which will be reissued in August. The recipient of a Fulbright fellowship to visit the former Yugoslavia and an Award in Literature from the American Academy of Arts and Letters, as well as fellowships from the Guggenheim Foundation and the National Endowment for the Arts, Orr and his wife, painter Trisha Orr, split their time between Charlottesville and the Adirondacks.

Orr talked about that spiritual level of poetry writing in a 2006 piece for National Public Radio’s weekly series, “This I Believe.” He begins by saying, “I believe in poetry as a way of surviving the emotional chaos, spiritual confusions and traumatic events that come with being alive.”

And here’s how he expresses it in a lyric poem, from his collection, “Concerning the Book That Is the Body of the Beloved” (Copper Canyon Press, 2005):

To be alive: not just the carcass
But the spark.
That’s crudely put, but…
If we’re not supposed to dance,
Why all this music?