Something Wicked [Good] This Way Comes

Tuesday is the 555th anniversary of William Shakespeare’s birth in Stratford-upon-Avon, Warwickshire. To celebrate, a University of Virginia student group, Shakespeare …

Tuesday is the 555th anniversary of William Shakespeare’s birth in Stratford-upon-Avon, Warwickshire. To celebrate, a University of Virginia student group, Shakespeare on the Lawn, will present a dramatic reading of “Much Ado About Nothing” that evening at 7 p.m. at New Dominion Bookshop on the Downtown Mall.

Jakob Cansler, a second-year student and the group’s publicity chair and scenic designer, said the comedy revolves around a central question: If love is a game, who are the winners? A staged reading, he said, allows the audience to “warm up to Shakespeare.”

A student-run theater troupe with no faculty advisers, Shakespeare on the Lawn typically performs one of the Bard’s plays each semester, and is fresh from staging “Macbeth” last month on Grounds. 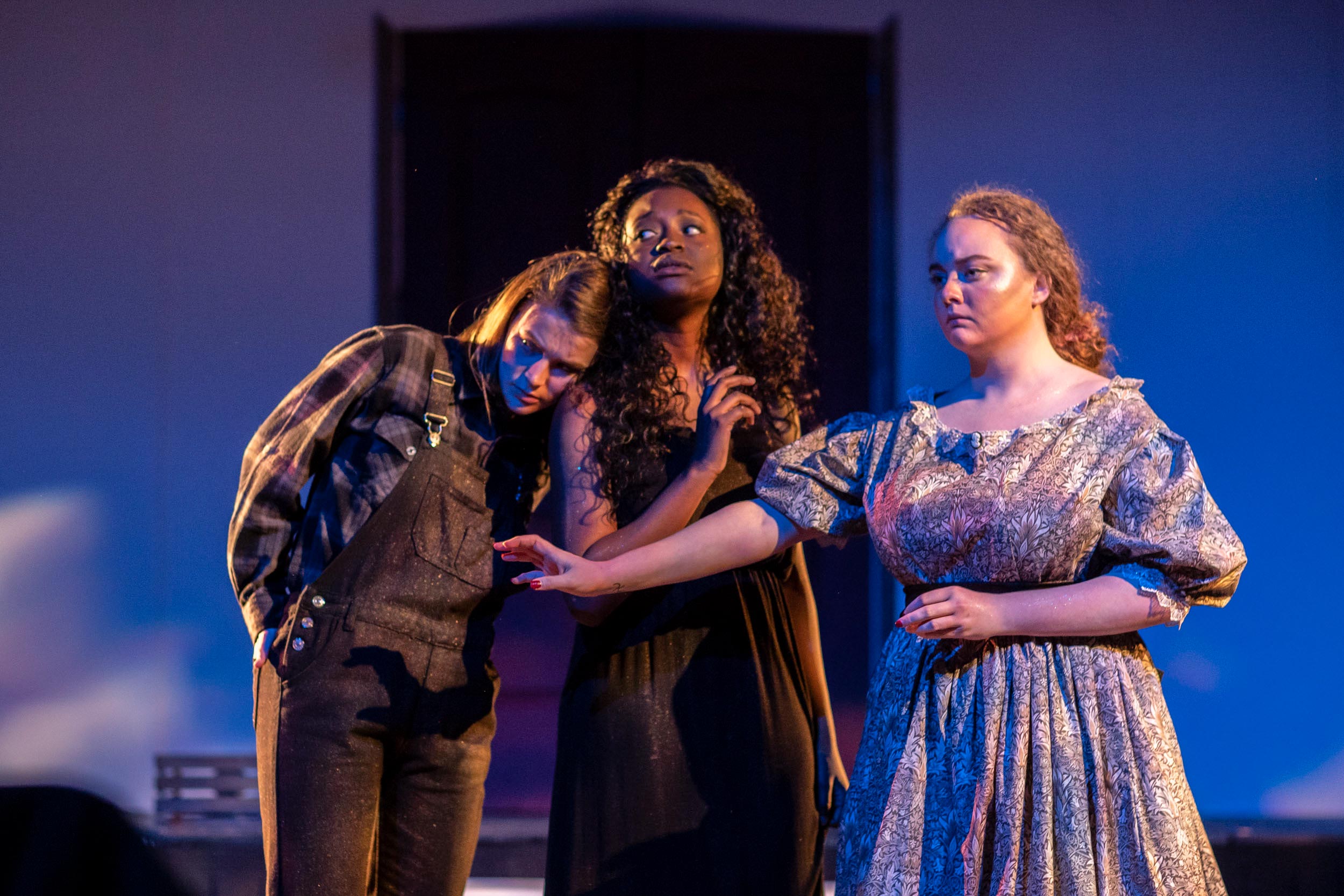 The group has established a new partnership with the downtown bookstore to bring Shakespeare closer to more people – and for free.

“Our mission is to make Shakespeare more accessible to both UVA and Charlottesville,” fourth-year student Maeve Hickey said, “and doing an event downtown allows members of the Charlottesville community to have a taste of Shakespeare for free.

“It’s also nice for us to perform in such a cool venue, and I hope this event brings more UVA students downtown to support local bookstores,” said Hickey, a double-major in English and media studies who serves as president of the theater troupe.

“We know that UVA has a lot of student talent. We wanted to bring that downtown to the community,” said Julia Kudravetz, a former New Dominion Bookshop employee who bought the store almost two years ago after previous owner Carol Troxell died.

Kudravetz remembered seeing a student performance at the Random Row bookstore in town many years ago and liked hearing Shakespeare in that milieu. She wants to create that kind of cultural experience in New Dominion’s “beautiful space,” she said.

The bookstore, which opened in 1924, advertised in the Cavalier Daily even back then. Currently, one UVA student and three alumni work there. Kudravetz is a UVA alumna of the Curry School of Education and Human Development.

Other UVA groups have partnered regularly with New Dominion Bookshop, including the Creative Writing Program, which schedules M.F.A. student readings there throughout the academic year, and the Virginia Festival of the Book that features 20 or so of its annual events at the bookstore. Kudravetz keeps a lookout for new faculty and alumni books to schedule readings with those authors, too.

Several UVA professors are on the roster this spring. Creative Writing Program professor Jane Alison recently read from her latest book of nonfiction, “Meander, Spiral, Explode: Design and Pattern in Narrative”; poet Debra Nystrom will read prose from an upcoming memoir Friday at 7 p.m., along with poet and UVA alumna Valencia Robin; Ahmed H al-Rahim, associate professor of Islamic studies in the Department of Religious Studies will release his scholarly work, “The Creation of Philosophical Tradition” on April 24 at 7 p.m.; and fiction writer Christopher Tilghman will read from his latest novel, “Thomas and Beal in the Midi,” on May 14 at 7 p.m. 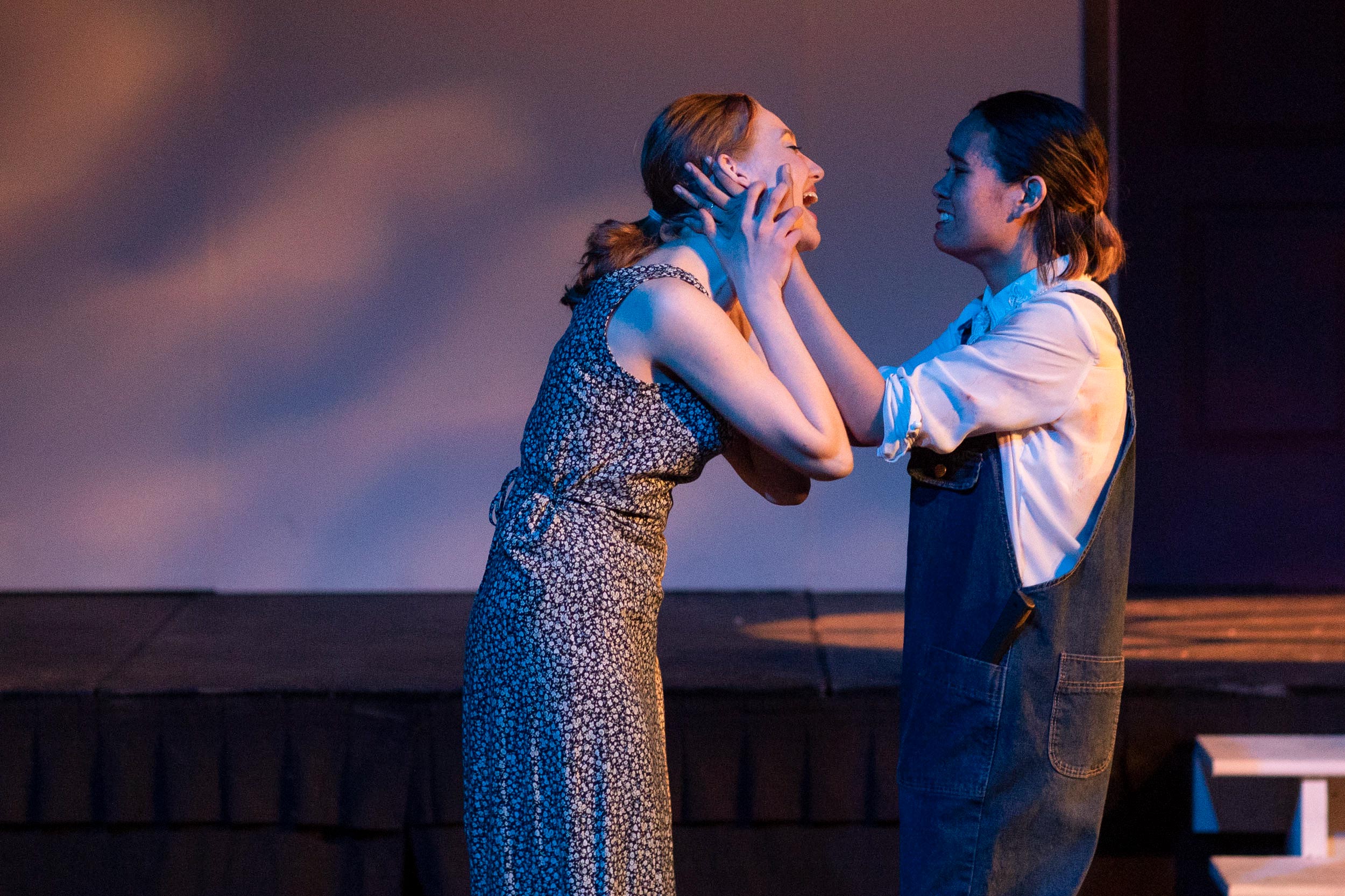 Cansler and third-year student Savannah Edwards will co-direct the 12-member cast who’ll read “Much Ado About Nothing.” Both are Miller Arts scholars and also participate in another longtime student theater group, the Virginia Players, that was created many years before UVA’s drama degree program was founded.

“Plenty of people only ever skim Shakespeare scripts for high school English classes, but these plays were written to be performed out loud,” Hickey said. “Once a group of actors breathes some life into a script, you might find yourself going, ‘Oh, I didn’t realize that line was funny!’”

In “Much Ado About Nothing,” plot twists and turns create misunderstandings that threaten or hasten new and old relationships as a bunch of people gather for a visit at a nobleman’s house. At first, Beatrice and Benedick act as if they detest each other. Another couple, Claudio and Hero, fall in love and decide to marry, only to be derailed – for a while.

“Messenger: I see, lady, the gentleman is not in your books.
Beatrice: No, an he were, I would burn my study. ”

“Audiences deserve a chance to relax and listen to a play without stopping to check a footnote in case that line shows up on a test, and doing a staged reading allows us to provide that opportunity without the expenses of a full-scale production,” said Hickey.

As for the “on the Lawn” part of the troupe’s name, that isn’t meant to necessarily indicate performing on the Lawn itself.

“The name is actually a UVA-centric version of Shakespeare in the Park, which our mission statement of free and accessible Shakespeare is based on,” Cansler said. “It’s just not feasible to do a full production with technical elements on the Lawn, especially because it requires permits.”

They have occasionally done smaller staged readings in the Academical Village, including “A Midsummer Night’s Dream,” performed last summer on the South Lawn, and a 2016 production of “Twelfth Night,” performed in Garden VIII. 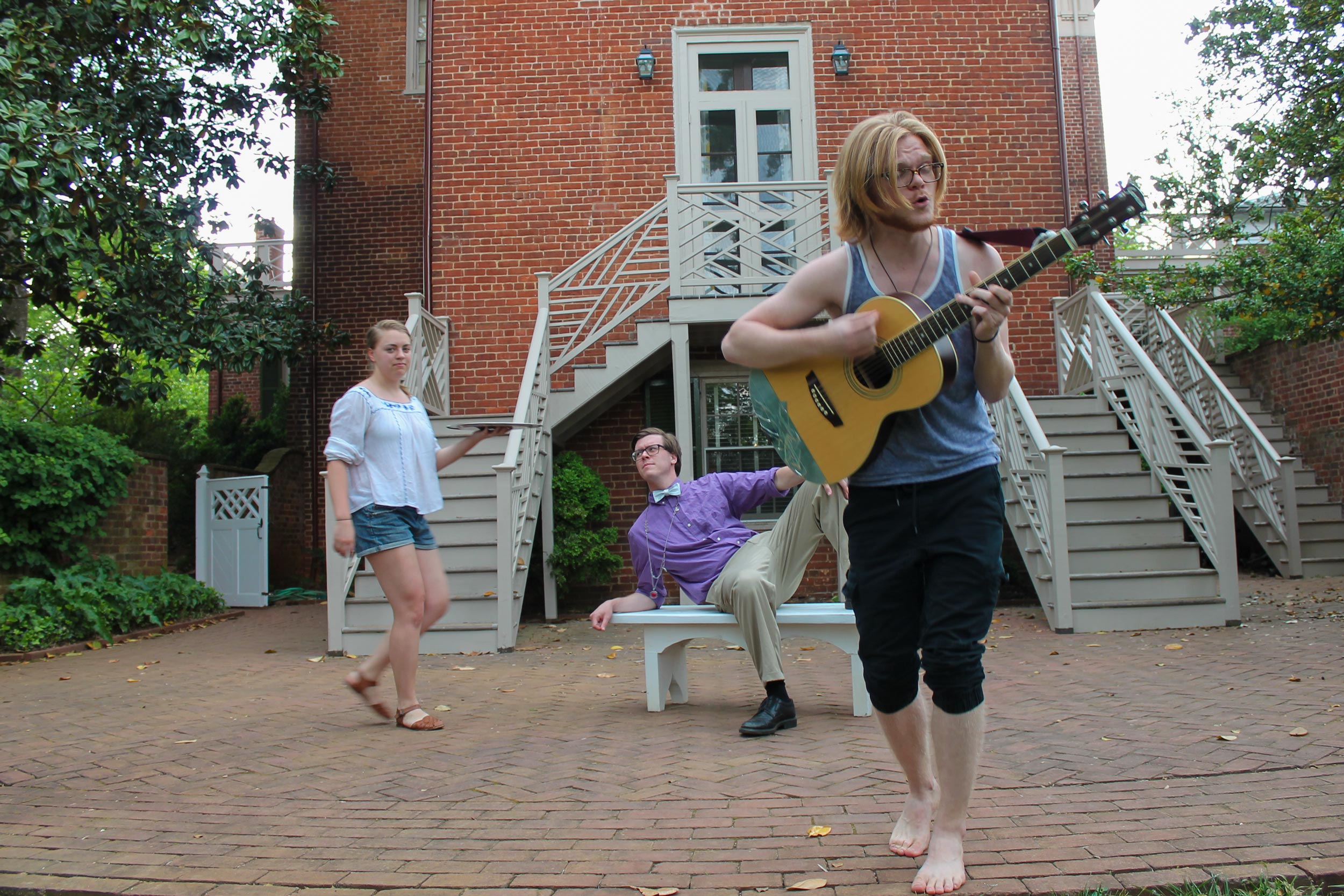 Shakespeare on the Lawn members Annika Schunn, Pete Hanner and Nick Hurst were part of the “Twelfth Night” cast who performed the play in Garden VIII three years ago. (Contributed photo)

The group staged this spring’s “Macbeth” production in the Student Activities Building. “Macbeth” follows the ascent of the titular character to the throne, and the consequences he – except in this production, Macbeth is a she – faces as a result. This production, directed by fourth-year student Gwyneth Sholar, placed the play in a Southern Gothic landscape, using this backdrop to question past and present structures of power. In this version, Macbeth isn’t power-hungry; she has good intentions. Dubbed “the Southern play” (instead of “the Scottish play”), the production explored the role of the American South’s history in the present to question the systems that determine who holds the power today.

“As You Like It” will be performed in the fall as the troupe’s next mainstage performance.

Cansler said what drew him to this group was the people. “Everyone in Shakespeare on the Lawn is extremely dedicated to the work that they do, but also have a lot of fun at the same time.”

He also loves “the mission of providing Shakespeare completely free to the public. I think making art accessible to everyone is something that society as a whole should strive for, and it’s amazing that we’re able to do it here at UVA.”

All Kinds of Drama at UVA

UVA has many opportunities for students who want to get involved with drama. In addition to the Shakespeare troupe and the Drama Department’s Virginia Players, these independent student groups have a specific focus: