The First Year and The Who; Yes, We Mean Pete Townshend And Roger Daltrey

Violinist Olivia Scheidt had just wrapped up her first year at the University of Virginia when she got a surprising text message: Would she like to perform with The Who, one of the most influential rock bands of the 20th century?

The exchange happened May 7, as Scheidt’s parents (her mother, Lynn Taylor, is a 1983 UVA alumna) were driving their daughter back to Alexandria following the completion of her first year.

The Who had a show at Jiffy Lube Live in Bristow on May 11. The band travels with a principal violinist, cellist and conductor, and recruits local professional musicians at each of its concert stops. Scheidt’s former violin instructor, a performer for the Washington National Opera, had posted on Facebook that she had joined the orchestra that would be backing the band.

Taylor, a huge fan of the band and who held tickets to the Bristow show, texted the instructor, hoping she knew the playlist for the concert. That’s when she learned the band needed one more violinist. Would Olivia be interested?

In accepting the paid gig, Scheidt became the youngest and only non-professional performer to play in the orchestra that night.

But she had to hustle. There were 24 songs on the playlist and Scheidt had to learn the 19 that included orchestral performances. Many of the songs were from The Who’s groundbreaking rock opera, “Tommy,” about a “deaf, dumb and blind” pinball wizard, a double vinyl set released in 1969 to massive critical acclaim. 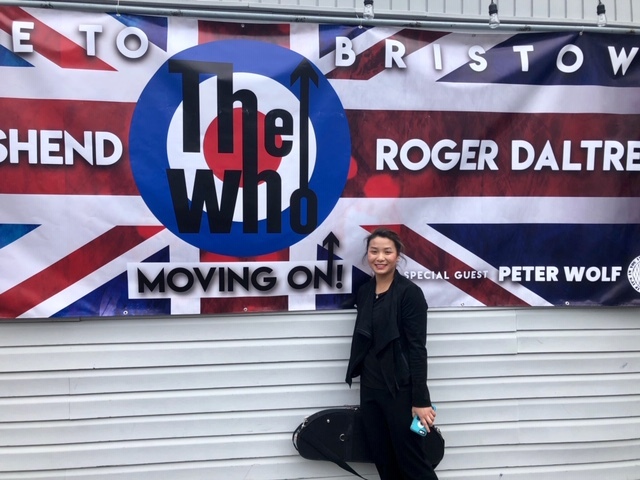 Scheidt at Jiffy Lube Live, where she performed on The Who’s “Moving On” North American tour. (Contributed photo)

“It was many days of practicing each piece over and over,” she said. “I also listened to the original pieces on YouTube to get a sense of the beat, how fast each of the songs was and when each instrument comes in. It was just a bunch of that on repeat for three days, for multiple hours each day.”

Scheidt, who plays with the Charlottesville Symphony and studies violin at UVA with associate professor David Sariti, has been playing the violin since she was 5 years old.

The day of the concert, she arrived early at the arena for a three-hour dress rehearsal. Jiffy Lube Live holds more that 25,000 people, and walking onto the stage was “amazing,” Scheidt said.

“This was a whole new experience for me,” she said, “walking out on stage and seeing all the empty seats that would later be filled with thousands of people.”

Scheidt said she didn’t expect the orchestra to share the stage with Pete Townshend, Roger Daltrey and the rest of the band. “I actually expected us to be either below the stage or in a pit,” she said.

Scheidt said the dress rehearsal didn’t include the band. Instead, speakers blasted guitar and piano solos to give the orchestra a sense of what the actual performance would be like. Each instrument had its own microphone, which created a layered sound. Later, the band would join the orchestra for a sound check. “It was just amazing, because I was about less than 10 feet away from Roger Daltrey and Pete Townshend and Ringo Starr’s son, Zak Starkey,” the band’s drummer.

“One of the coolest things was to listen to them practice all their guitar solos,” she said. “They were totally in their own zone.”

The first song of the night was “Overture” from “Tommy.” “The stage was shaking with the audience and when the band came out the whole audience lit up,” Scheidt said.

When they began to play, she had a hard time hearing herself, even though she was miked, because there was so much screaming and cheering. The musicians had been told to bring earplugs because of the deafening noise, but early into the concert Scheidt took hers out so she could hear her violin.

Then something unexpected happened about a quarter through the show. Scheidt’s “E” string, the highest-pitched of a violin’s four strings, snapped in two. She had to ad lib by shifting up on her “A” string to hit the high notes. “My string had never broken before in a single performance,” she said. “We got a break after playing ‘Imagine A Man,’ so I was able to change my string then.”

Of all the songs Scheidt performed with The Who, her favorite was “Overture.” At just over five minutes long, it is a soaring piece of music that showcases brilliant French horn solos, subtle background vocals, galloping drums and strumming guitars.

“It was just very different from any other rock song I had heard before. There were not many lyrics, which I actually preferred,” she said. “I thought it was a good way to start the concert because it showcased the orchestra, which you do not usually see or hear with rock bands in general.”

Another thrilling aspect of the performance was being able to sit feet away from The Who and watch them perform the songs that did not include the orchestra. “It was super, super cool and amazing!” she said.

The last song of the night was The Who’s skin-tingling anthem “Baba O’Riley,” commonly known as “Teenage Wasteland.” It opens with a thrilling organ marimba beat and has landed on scores of lists of the best rock songs of all time. “Every single audience member got out of their seats and started clapping. Some people were standing on their chairs,” Scheidt said. “It was just amazing to see.

“I got to meet so many professional violinists,” she continued. “There were some from the military, the Air Force and other ones who play for the Washington Opera.”

In fact, the opera musicians were given a choice that night; perform Puccini’s Tosca or play with The Who. Many opted for option B.

For Scheidt, it was the night of a lifetime. And an awesome résumé-builder.