With Digital Tools, Students Take Learning Into Their Own Hands

With a few clicks on a laptop, the University of Virginia student teams displayed their final digital projects on big …

With a few clicks on a laptop, the University of Virginia student teams displayed their final digital projects on big screens in the Rotunda’s Dome Room. Their work encapsulated the history and culture of Tibet, from ancient times to modern, especially as it has changed over the past century.

Learning how to use cutting-edge, web-based digital tools developed at UVA, they created dynamic visualizations, putting in a lot of research and work behind the scenes in the seminar, Introduction to the Digital Liberal Arts. As tech-savvy as students are these days, they took the opportunity to practice innovative methods that will likely be a valuable skill set to have when they go on to jobs and careers.

Employing these digital tools encourages research and long-lasting learning, said Bill Ferster, who has taught these seminars more than a half-dozen times in recent years, with other faculty bringing their academic expertise in a range of subjects. 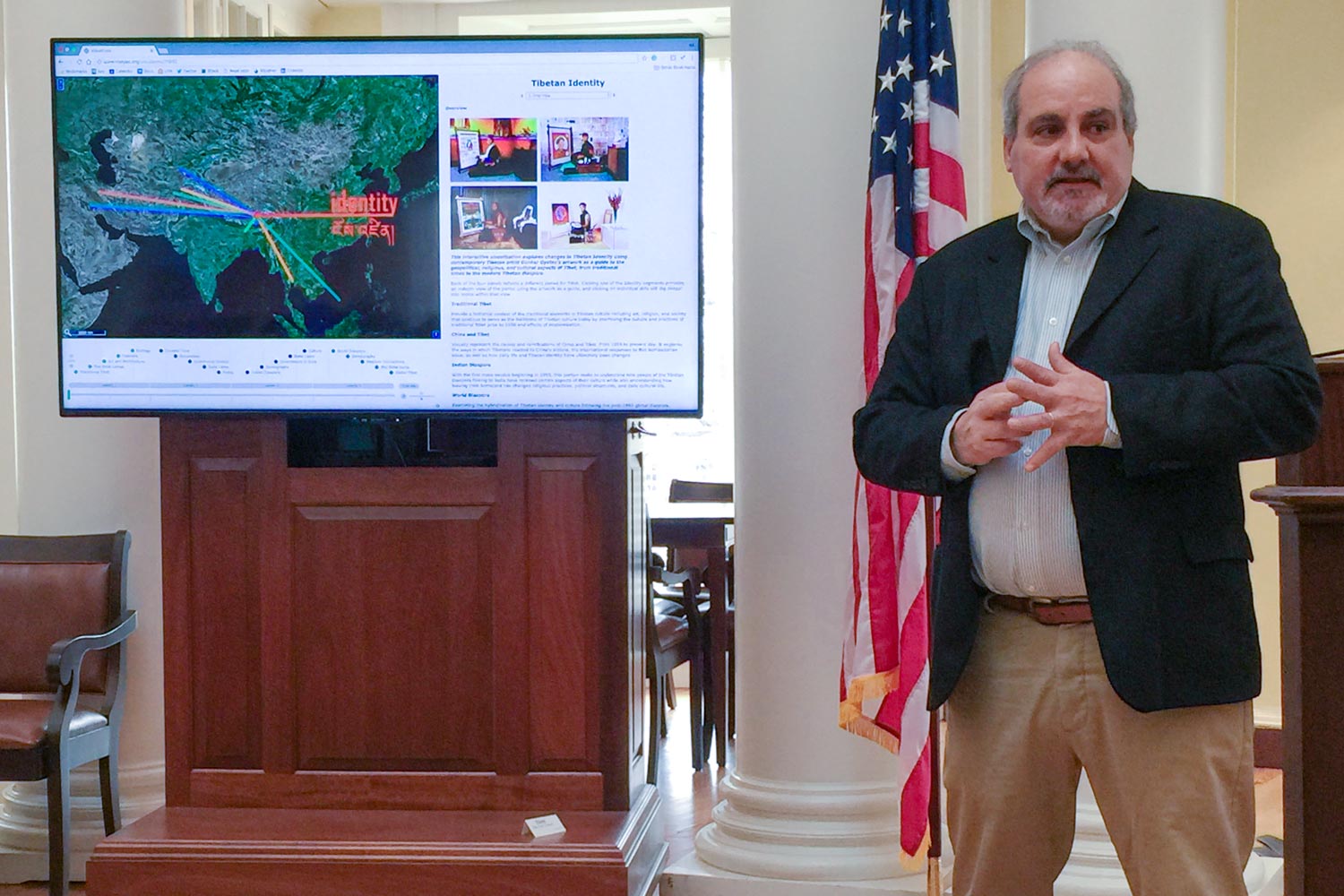 Bill Ferster introduces students’ digital projects on the final class day of the semester in the Rotunda Dome Room. (Photo by Susan Ferster)

This fall, Ana Cristina Lopes, a lecturer in the Department of Religious Studies, joined Ferster and focused the class on Exploring Identity in Tibet. She agreed with him that the requirement to use these digital tools to create their presentations “really helped them learn more deeply about Tibet and Tibetan identity.” Four student teams based their projects on one of a series of self-portrait photographs, called My Identity, by contemporary Tibetan artist Gonkar Gyatso.

“The need to think visually about these subjects pressed the students to find different ways of relating to them,” Lopes said. “They took things into their own hands, became like professional researchers, maybe without even realizing it. In sum, they moved from the passive position of being a student to the active position of being a researcher, enhancing in profound ways their learning experience, and their skills to do future investigations.”

The first portion of the course consisted of readings, lectures, guest speakers and discussions about Tibet, as well as about interactive technology.

“As an anthropologist specialized in Tibetan Buddhism, this digital humanities class seemed to me to be a unique opportunity to teach undergraduates in a more engaging way about subjects that are for the most part obscure to them – i.e., Tibet, the Dalai Lamas, Buddhism, the Cultural Revolution [in China], and so forth,” Lopes said. “In general terms, teaching from an anthropological perspective is for me above all a way to sensitize students to different manners of experiencing reality. There are of course many ways of doing that – in the case of anthropology, the most classic way is to do fieldwork.”

The class projects instead learned about Tibet from the work of contemporary Tibetan artist Gonkar Gyatso (who will visit the Grounds Feb. 18 to 22 to meet with students and give a public talk). His four photos (he later added a fifth) show the artist, looking over his left shoulder directly at the viewer, with a painting he is working on in a setting that reflects a particular time in Tibetan history, from its traditional culture to 20th-century changes that led to a worldwide diaspora. The migration began in the 1950s when the Chinese came in, claiming they were taking back part of their country, and the Dalai Lama, Tibet’s spiritual leader, traveled to exile in India.

The student projects can be viewed here.

“This class is a prototype of an evolving effort to offer research seminars to connect undergraduate students with faculty in creating an interactive visualization that invites deep inquiry into that faculty member’s research interests,” said Ferster, a Curry School research professor working with UVA’s Sciences, Humanities and Arts Network of Technological Initiatives, known as SHANTI.

“The ability to visualize primary sources and information presents a new opportunity for digital scholarship, using data to support inquiry and argument,” he said. Using the SHANTI’s Mandala suite of digital tools enables users to combine data with images, maps, charts and video into highly interactive and compelling dynamic visualizations and presentations, also providing seamless access to other web-based applications such as online maps and Google documents. The digital tools are freely available to the University community at www.viseyes.org.

The students’ presentations each covered one of the four periods: traditional Tibet, China and Tibet, the Indian diaspora and the global wave of migration across the world, especially into Western countries. The teams used common spreadsheet programs and online communication programs to work on their research. Then, with the digital tools such as VisualEyes, which weaves together the images and texts, they customized their presentations with coordinated displays of maps, timelines, photos and text. 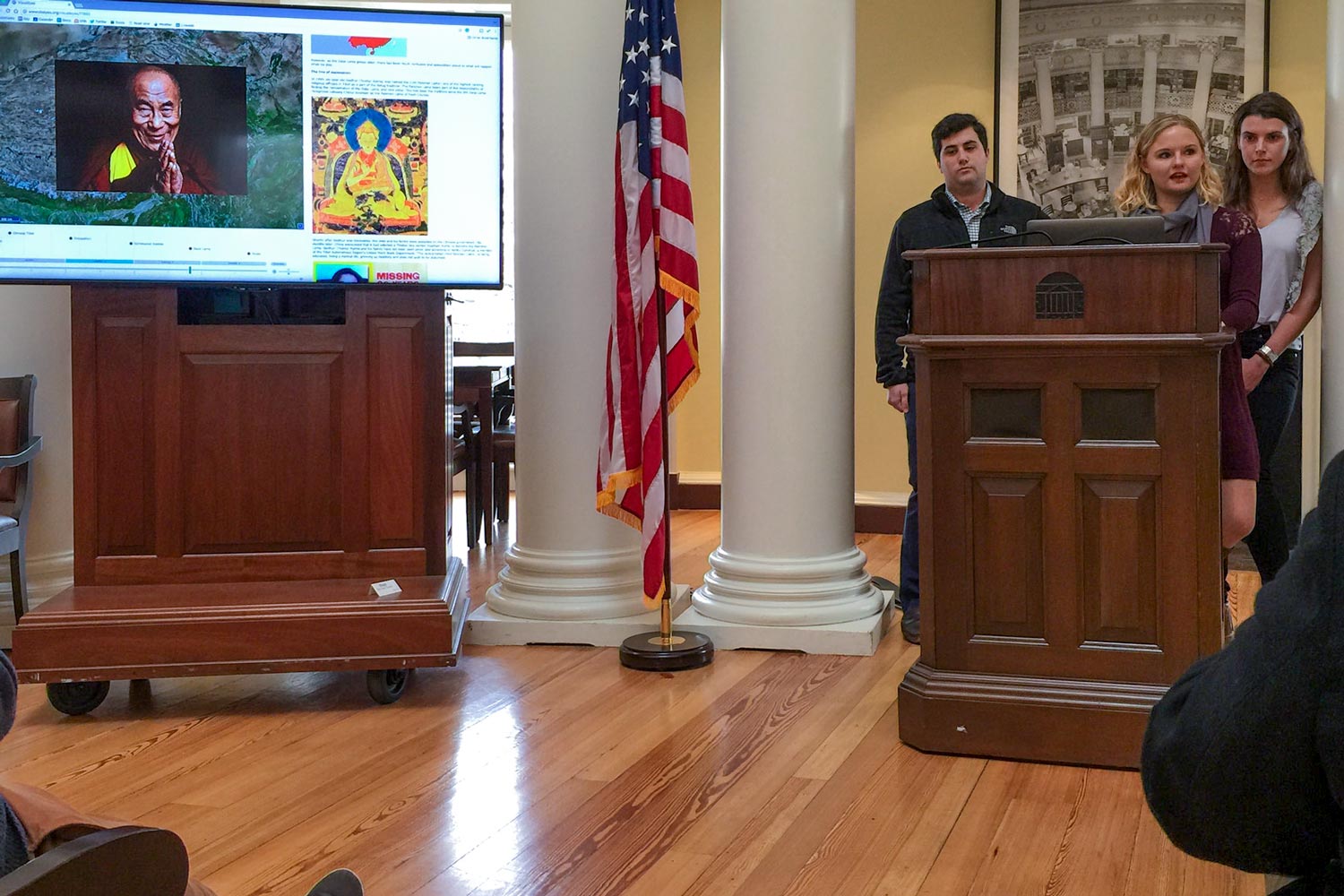 Fourth-year student Abigail Lague, a media studies major, said she appreciated the hands-on experience and learned a new way of presenting information, using the digital tools that enabled her team to create their project on China and Tibet, as well as learning a previously unfamiliar topic.

“The visualization helped to make facts that otherwise might seem dry or complex more interesting and easier to remember,” she said. Having expanded her repertoire, she said she could definitely see using digital tools like this in the future.

Ferster built an earlier version of VisualEyes as part of UVA’s groundbreaking work in the digital humanities 20 years ago through the Virginia Center for Digital History with funding from the National Endowment for the Humanities.

Past projects include Vinegar Hill: MemoryScape, which looks at Charlottesville’s urban renewal effort in the 1960s that resulted in the destruction of a longtime African-American neighborhood and its repercussions; and Thomas Jefferson’s travels to England with historian Scot French. With Associate Professor of History S. Max Edelson, Ferster also hosts an ongoing cohort of graduate students working on digital projects.

Fersert would like to see more seminars like this offered to students. He and Worthy Martin, a computer science professor and director of UVAs Institute for Advanced Technology in the Humanities, have been developing the idea of undergraduate research seminars where SHANTI and IATH would actively work with departmental faculty to teach the digital seminars regularly.

“This kind of seminar,” Ferster said, “combines the best of liberal arts and discipline-specific education with training in visual thinking and the application of new technologies. As importantly, it offers undergraduates an opportunity to present original research for peer review and online publication, adding value and purpose to their work.”