Class of 2019: Trombonist Improvises and Creates a Whole New Tune

David Shim still remembers the moment clearly. Then a second-year student, he was sitting in Campbell Hall, home to the University …

Then a second-year student, he was sitting in Campbell Hall, home to the University of Virginia’s School of Architecture, staring at an acceptance letter from UVA’s McIntire School of Commerce.

Just a few months earlier, Shim – who came to UVA from Centreville, intending to study business – would have clicked the “accept” button without a second thought.

However, that was before he took a design course with architecture and studio art professor Sanda Iliescu, and before he wandered the halls of Campbell Hall, where students make, design and build new things every day. Before he understood that his love of art could fuel an architecture career.

Beside him, a classmate from Iliescu’s class told him it was a big decision, that he could take some time to think about it. Shim, though, realized he’d known the answer for weeks, if not months.

“It was a proud moment for me, because getting into the Commerce School is not easy,” he said. “But I realized that I had already made up my mind, that I knew in my heart I wanted to study architecture.”

Shim declined his Commerce School acceptance right then and instead began the process of transferring into the School of Architecture. It wasn’t easy to join classmates who already had two years of architecture education. However, Shim, who will graduate this month, has no regrets.

He will leave UVA with a job (in Washington, D.C., with global architecture firm Cooper Carry), a completed thesis project on mixed-income housing for Amazon’s HQ2 site in Arlington, and the Distinguished Artist Award in Architecture, an honor bestowed by the UVA Arts Council last year.

Thanks to his four years in the Cavalier Marching Band, Shim will also leave with memories of a national championship. He is the leader of the band’s trombone section, played at every home football and at many basketball games, including the NCAA championship game in Minneapolis. 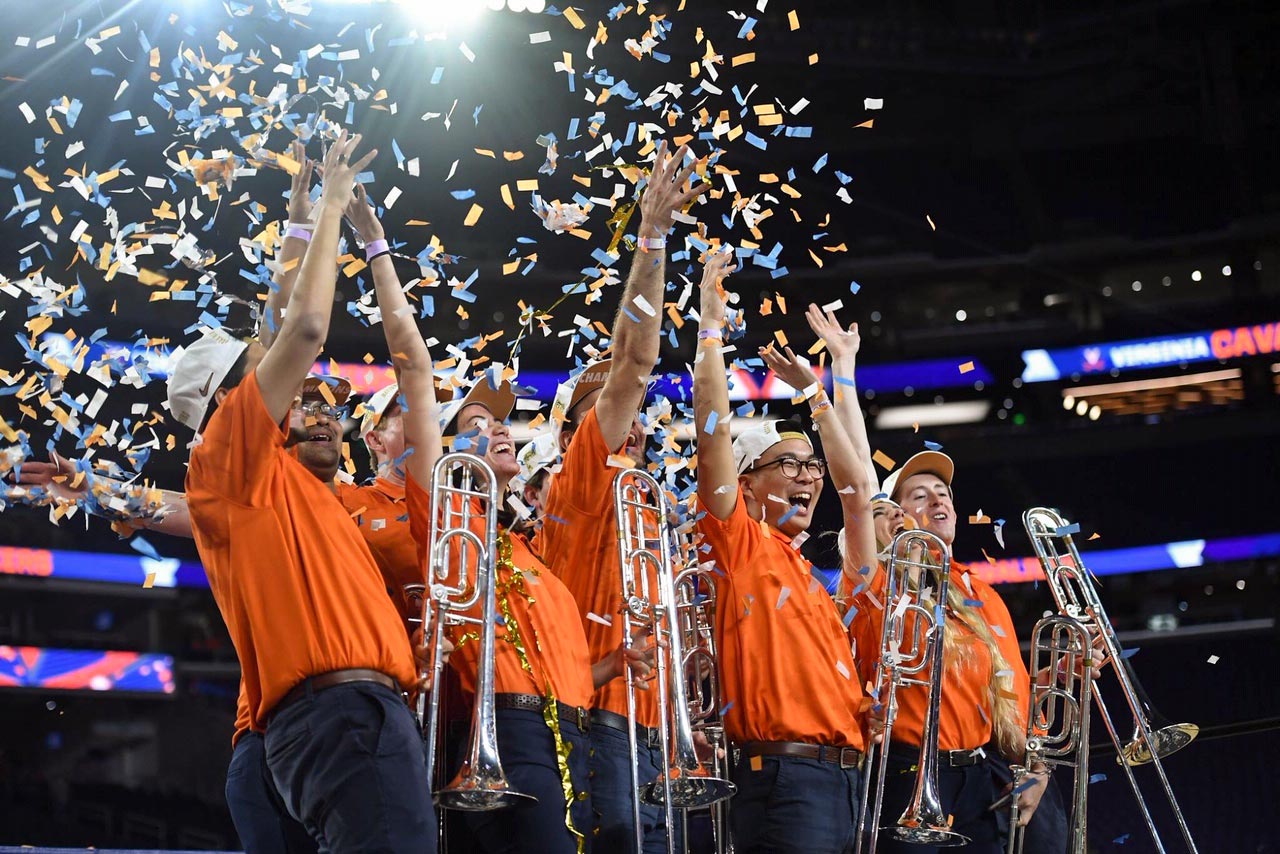 Shim, center, relished the moment with his fellow trombonists as the confetti fell in Minneapolis after the UVA men’s basketball team’s NCAA title win. (Contributed photo)

Perhaps most importantly, he will also leave UVA with a cast of mentors, drawn from architecture professors whom he said have played an outsized role in his growth as a student and a person.

“One thing that sticks out to me, looking back at the past 2 ½ years is the degree to which my architecture professors have cared for my own personal growth,” he said. “It really went beyond my expectations, and I don’t feel any reservations about approaching any professor I have met. They are all very open to discussion.”

He has worked closely with architecture and urban and environmental planning professor Mona El Khafif on a thesis project exploring affordable housing solutions for Crystal City, which could face dramatic change as Amazon – and the thousands of workers it might bring – comes to town.

“The region is already facing a housing shortage, with a significant lack of affordable housing options,” said Shim, who encountered the problem firsthand when looking for an apartment near his new job.

His thesis proposes alternatives to conventional single-family homes, which are costly to develop and often not the best solution for young, unmarried workers. Instead, he created a model for modular housing that could be built in vertical buildings, with private gardens and balconies complemented by shared spaces and gardens at the top and bottom of each building. 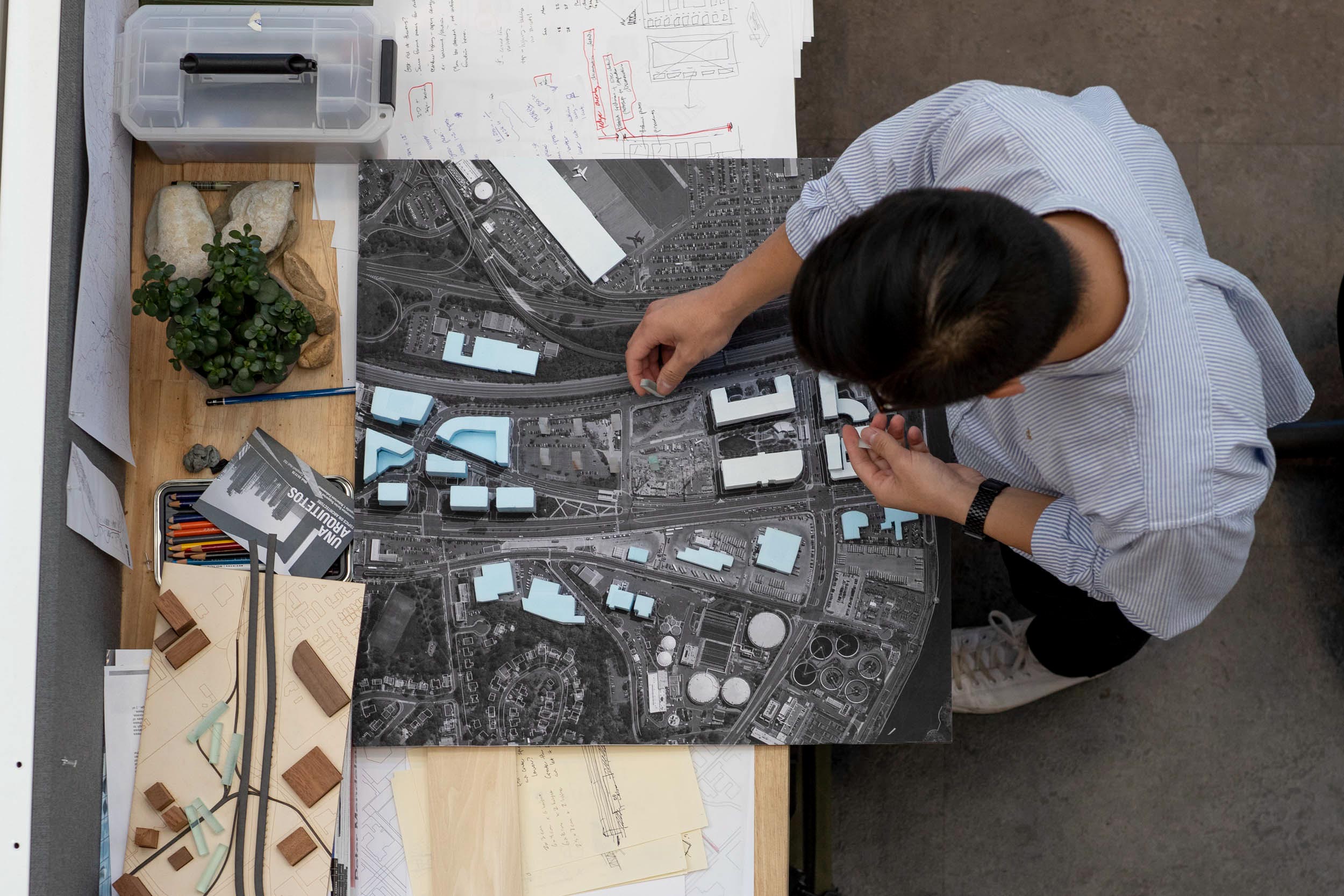 “The model of the traditional family, with two parents and two children, is changing, and there are not enough options for people who don’t fit that mold,” he said.

El Khafif said Shim managed to take on two pressing concerns in architecture: how to provide affordable housing and how to create housing developments that have less environmental impact than traditional suburban neighborhoods.

“It’s a gigantic topic to take on, and you have to do it in a way that will allow people to buy in,” she said. “You need to provide amenities they are used to – a garden, a garage – and also the kind of social community that exists around the cul-de-sac. … I think it is a very strong proposal.”

El Khafif, who has taught Shim twice and advised him on his thesis, has been impressed by him since he transferred into the school.

“Coming in during your third year can be really challenging, because the other students already have two years of architecture education and the skills that come with that,” she said. 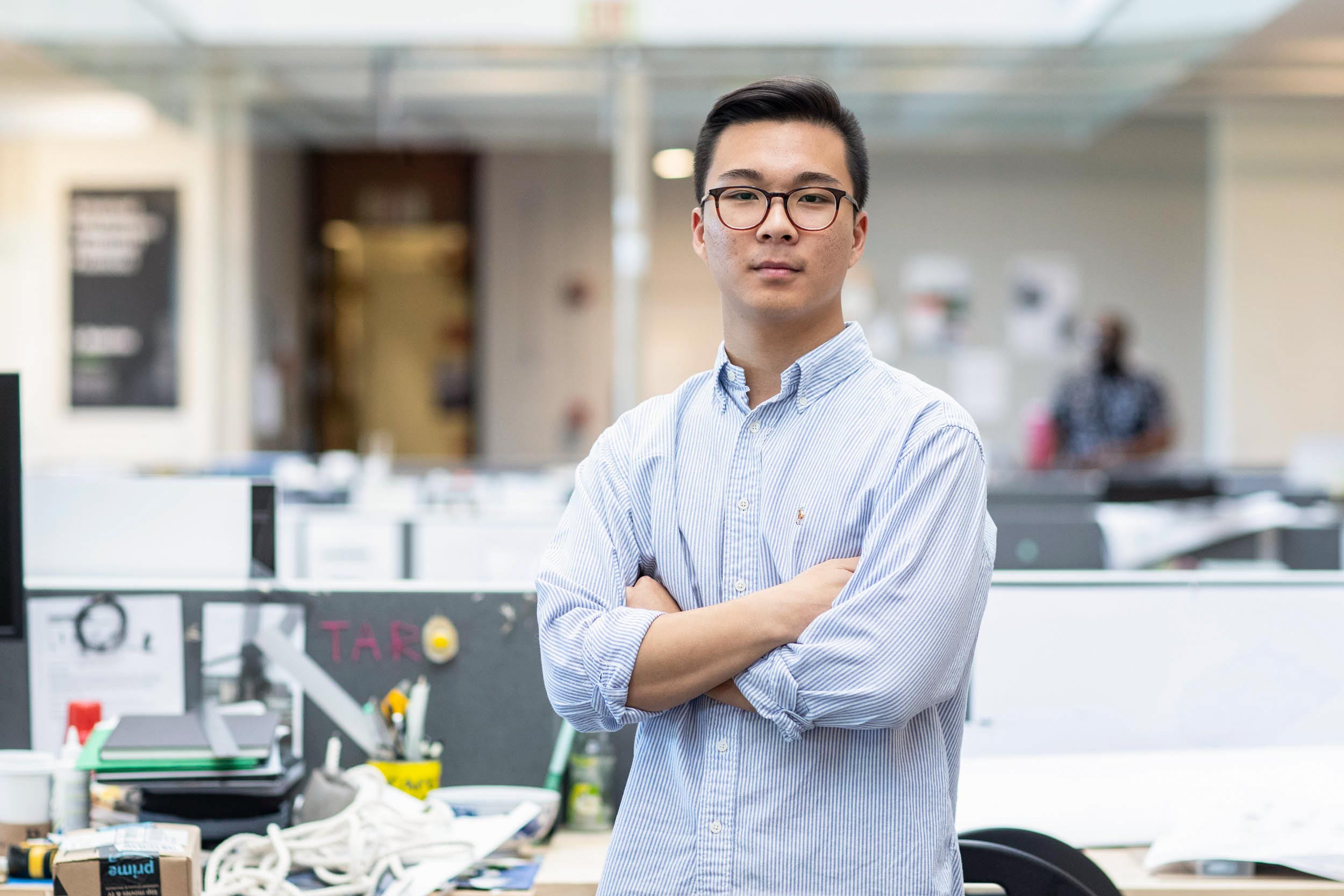 After graduation, David Shim will start a job in Washington, D.C. with the architecture firm Cooper Carry. (Photo by Sanjay Suchak, University Communications)

“David is very social, very open, always in a good mood, always smiling,” she said. “He is very teachable and a good listener. He always sought out advice, always had good questions for me or a project for me to look at.”

And, she said, he did it all while balancing other commitments, like the marching band.

“That was very impressive, because the band can be really time-consuming,” she said. “He always fulfilled his commitments to both.”

Indeed, Shim video-chatted with El Khafif from Minneapolis to discuss his thesis project, just hours before the band assembled for the national championship.

That championship, he said, provided a picture-perfect ending to his time at UVA.

“Witnessing that firsthand was just a great cherry on top of my four years in the band,” he said. “It was an absolutely incredible experience.”

Managing the trombone section, which includes 41 students, taught him a lot about leadership.

“Leading a section is a great chance to meet people from all different parts of the University, and to learn how to handle and address all of the different issues that come up and work with each person to make sure they have what they need,” he said. “I don’t think I would have gotten to this point, in terms of personal growth, if I had not been in the marching band.”

“David will be very successful,” she predicted.