Gardens, Real and Imagined, a Must-See on Grounds

To celebrate spring, garden lovers are visiting the University of Virginia’s pavilion gardens, some of which are part of this …

To celebrate spring, garden lovers are visiting the University of Virginia’s pavilion gardens, some of which are part of this week’s Historic Garden Week tour.

Meanwhile, a new exhibit at UVA’s Albert and Shirley Small Special Collections Library shows a garden design on Grounds that never was.

The exhibit focuses on a plan for a botanical garden that was to have been installed near the Academical Village. In 1820, Thomas Jefferson commissioned José Francisco Correia da Serra, a Portuguese cleric, botanist and diplomat, to draft a design for a botanical garden. Six years later, Professor John Patten Emmet assisted Jefferson in selecting the location – a hillside west of the Rotunda, which today slopes behind Alderman Library to Nameless Field.

The site was to have been a six-acre trapezoidal botanical garden and terraced tree grove. But when Jefferson died only two months later, those plans were set aside. This exhibition traces the origins and history of this unrealized garden, with letters and other material, including the original manuscript plan drafted for Jefferson by Correia da Serra – a gift from Joel B. Gardner, who graduated from the College of Arts & Sciences in 1970 and the School of Law in 1974.

UVA alumna Jenny Jones, who earned a Master of Landscape Architecture degree in 2010, made conjectural drawings of what the garden may have looked like, had it been built, to accompany fellow grad student Lily Fox-Bruguiere’s 2010 master’s thesis in architectural history, “An Uncultivated Legacy: Jefferson’s Botanical Garden at the University of Virginia.” Jones’ drawings, too, are part of the exhibit.

Fox-Bruguiere argued that Jefferson intended the botanical garden to be an integral part of the University, according to exhibition curator David Whitesell. “The conjectural drawings were completed to the specifications found in Jefferson’s letters as they may have appeared in the 1830s,” Whitesell said.

The exhibit is on view in the First-Floor Gallery of Harrison/Small through June 29. 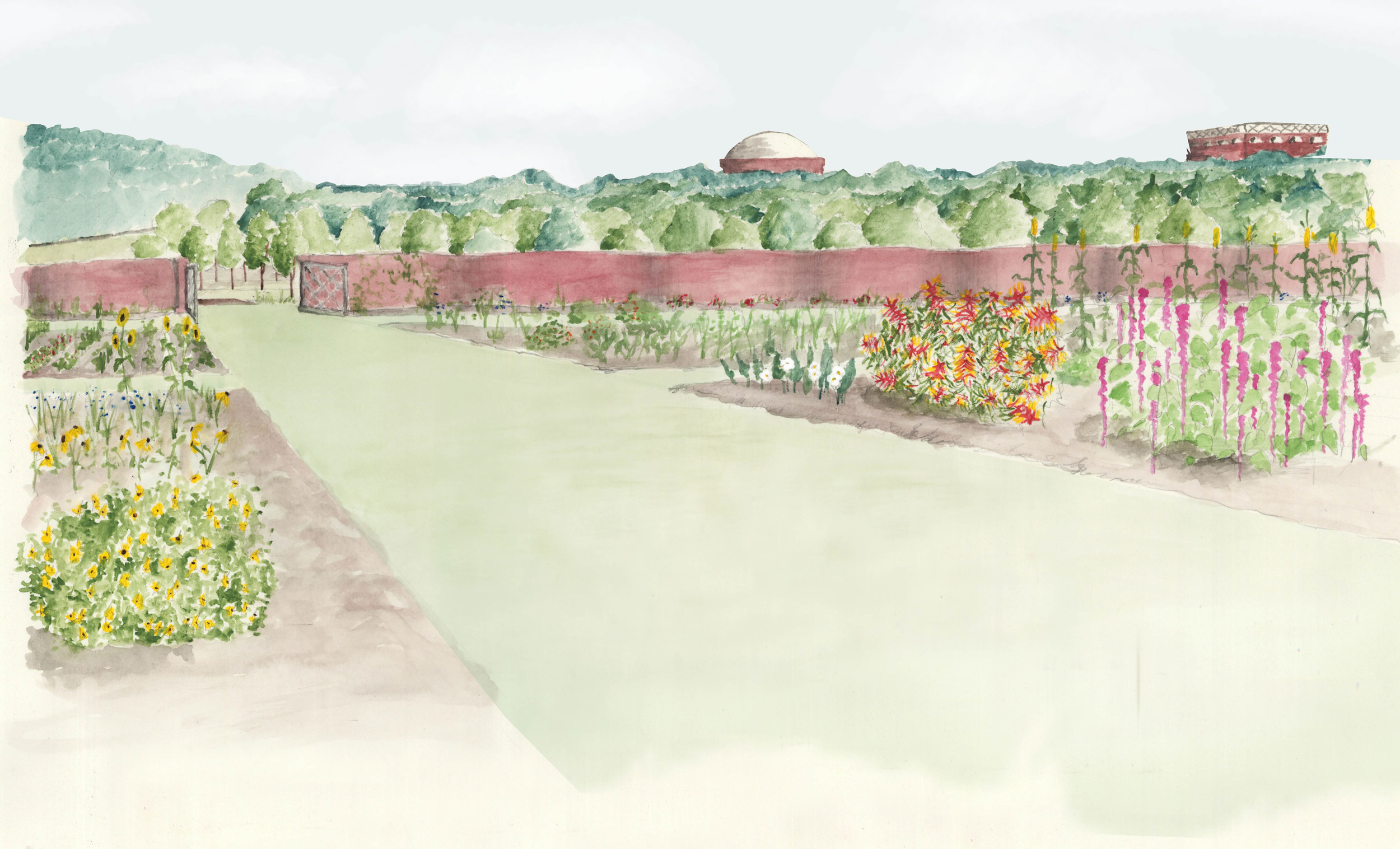 While Jefferson’s botanical garden was never built, real flowers, shrubs and trees adorn the University’s present-day pavilion gardens, thanks to the Garden Club of Virginia’s mid-20th-century restorations. The west pavilion gardens were restored between 1947 and 1953 and the east gardens between 1960 and 1965.

The relationship between the Garden Club of Virginia and UVA continues as the Office of the Architect and Facilities Management’s landscaping division work with the club, which supports renewal projects. The Garden Club included a selection of UVA gardens on formal tours that were held Monday as part of Historic Garden Week, which runs through May 4.

University Librarian and Dean of Libraries John Unsworth and his wife, Maggie Unsworth, opened their home in Pavilion II, with floral arrangements courtesy of the Dogwood Garden Club. Pavilion IV, where politics professor Larry Sabato lives, was also on the tour. 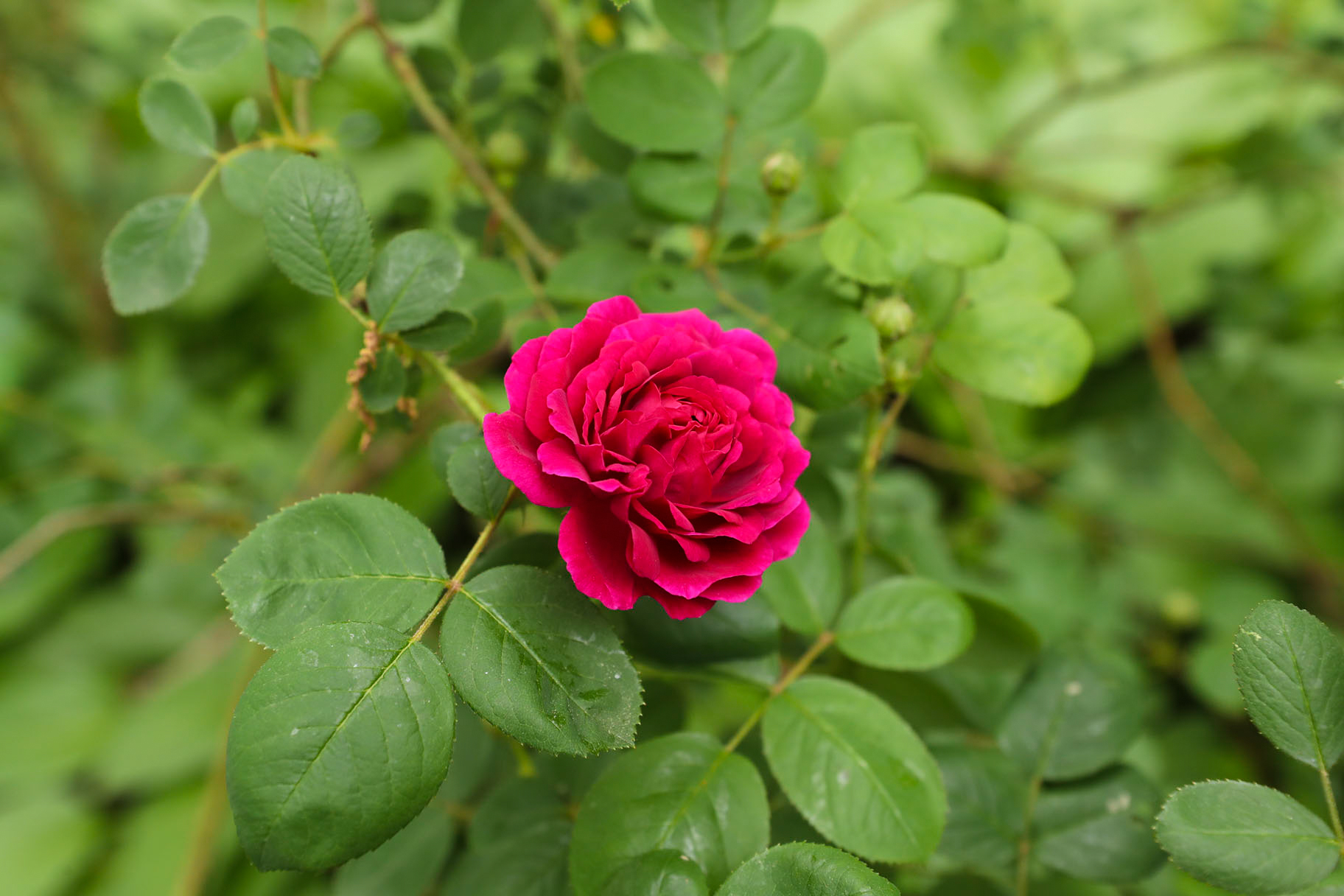 Roses like this one in Pavilion Garden VI are starting to blossom. 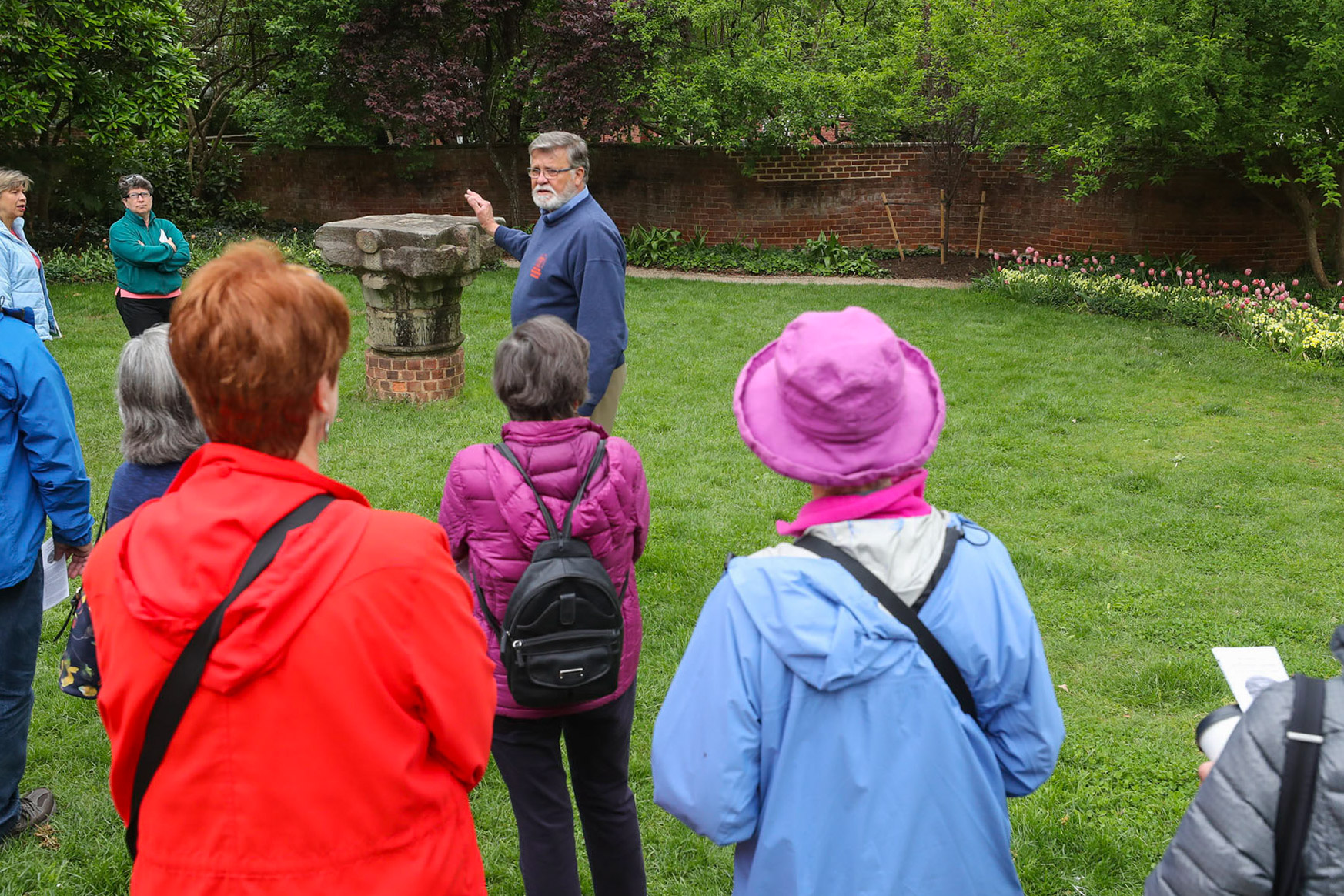 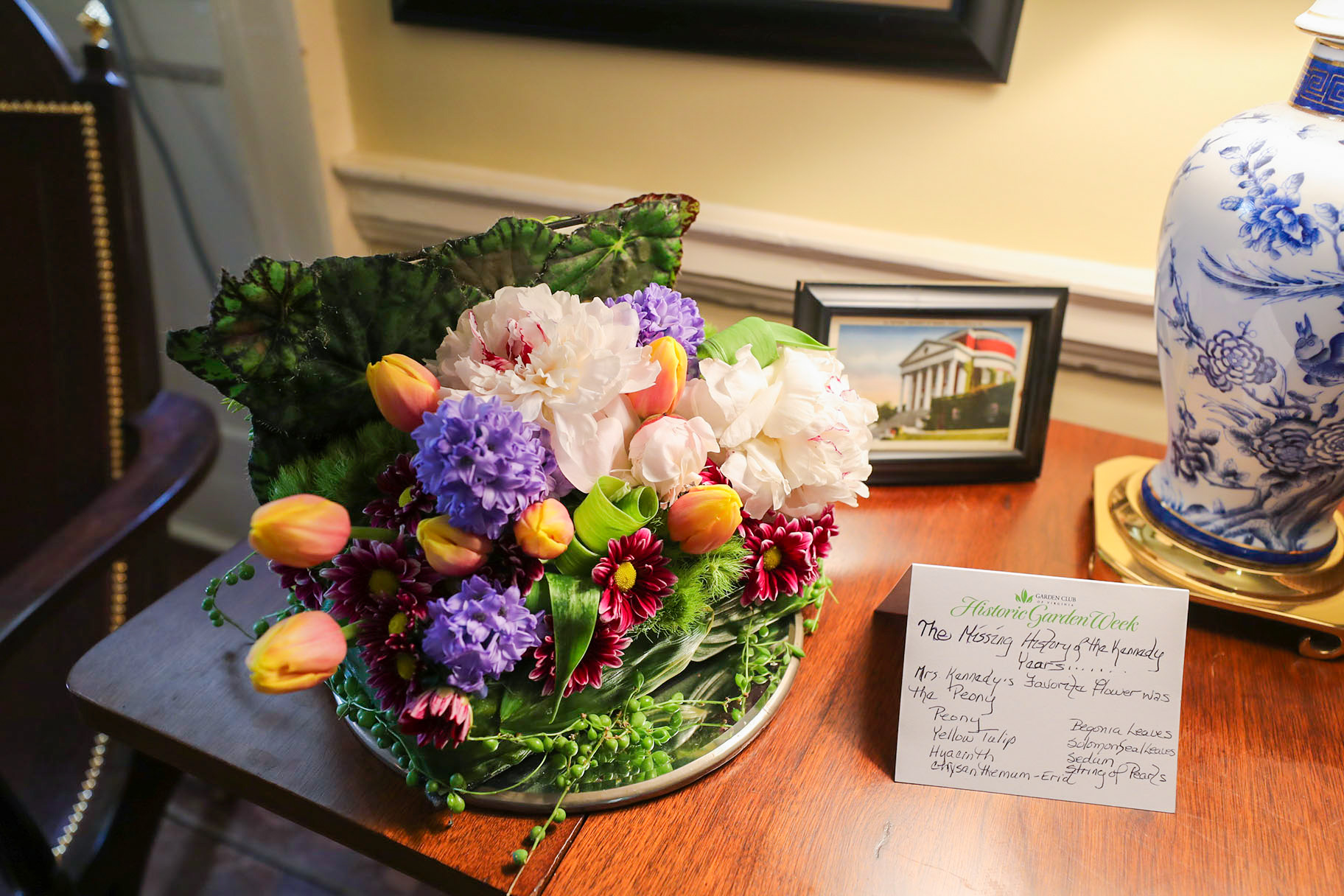 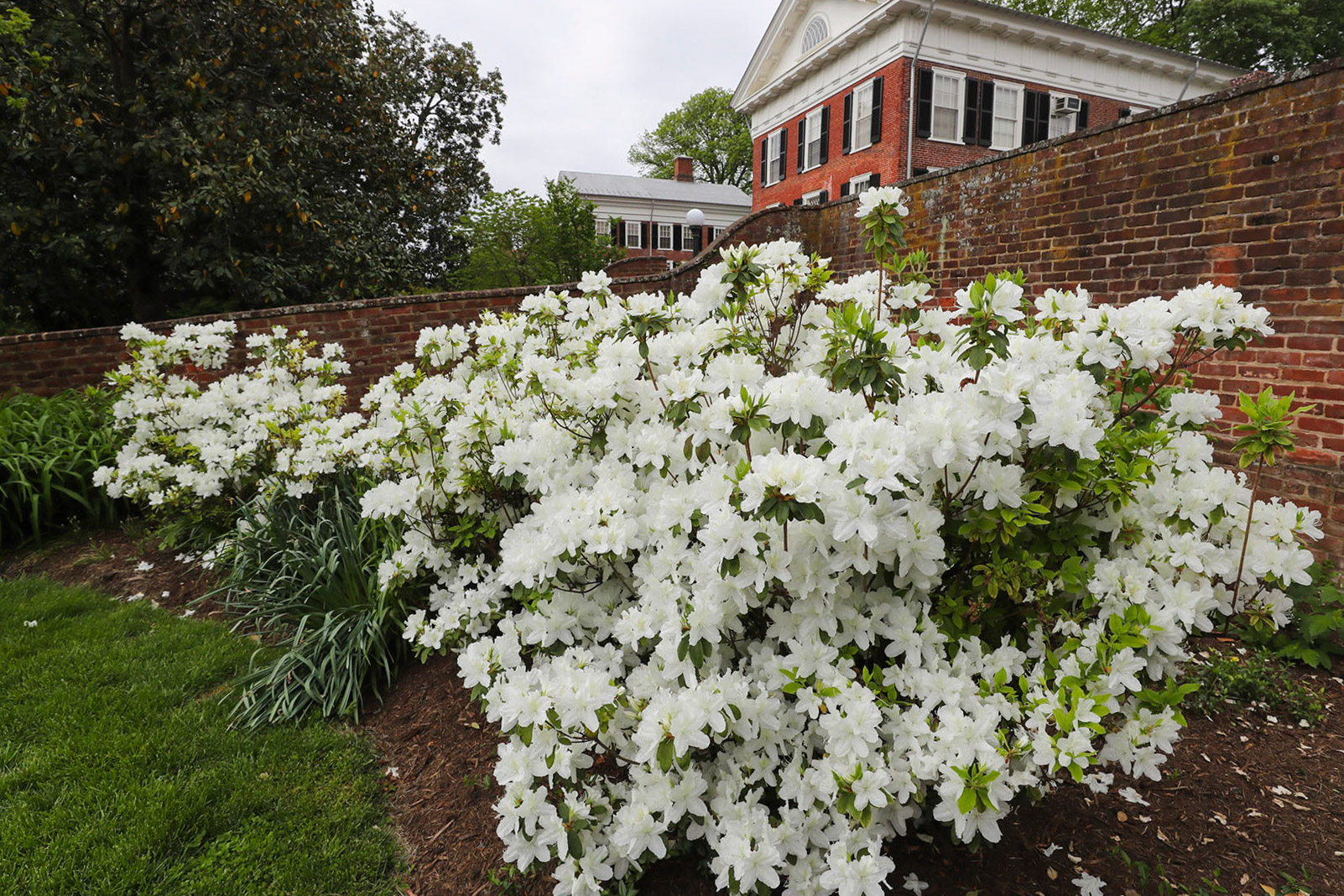 Azaleas come in many colors in addition to white, and are still blooming around Grounds. The pavilion gardens are open daily. 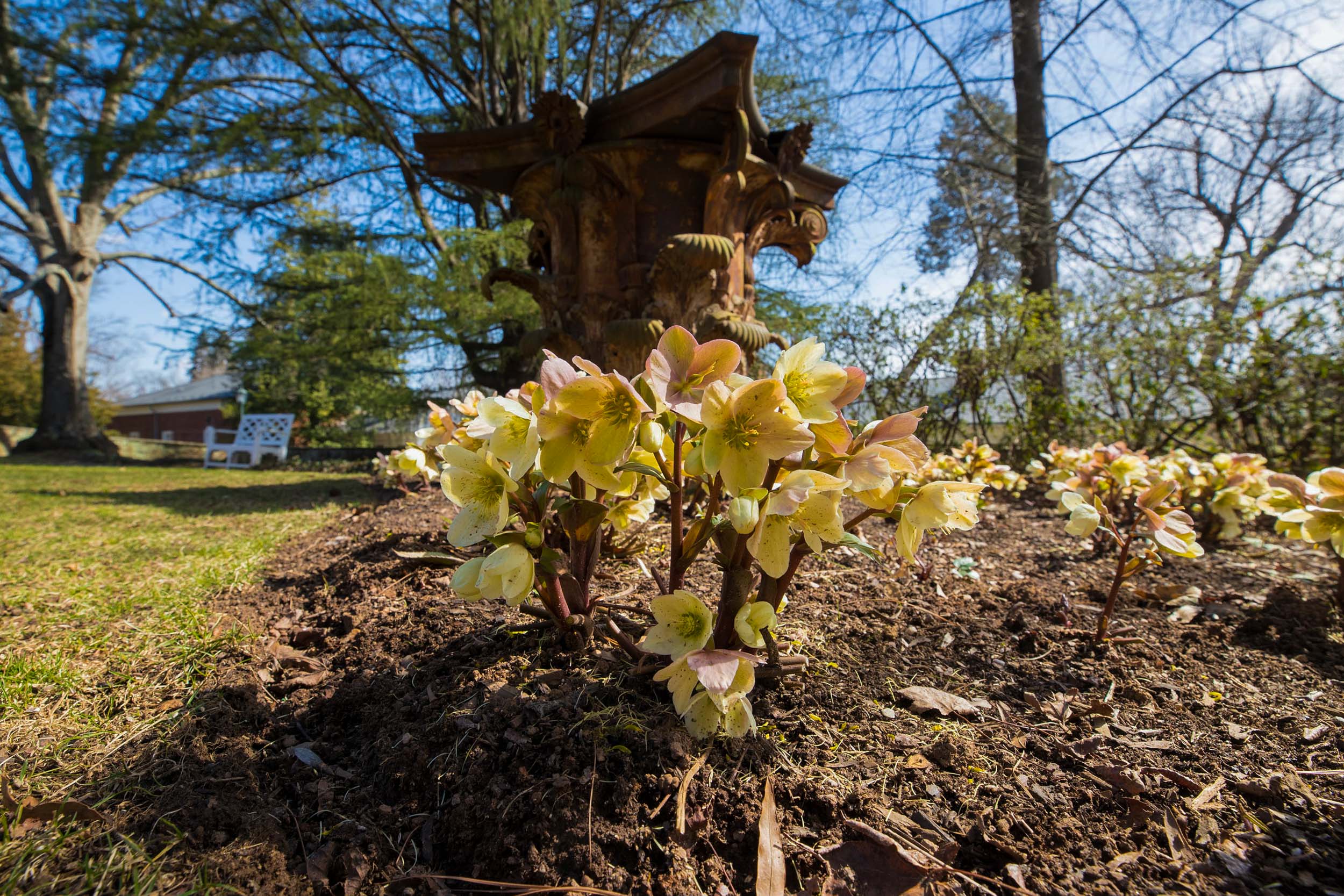 These perennials are called helleborus, also known as Lenten rose.