U2 Rocks a Rita Dove Poem in Pre-Concert Show

Former U.S. Poet Laureate Rita Dove, Commonwealth Professor of English at the University of Virginia, has spent a good part …

Former U.S. Poet Laureate Rita Dove, Commonwealth Professor of English at the University of Virginia, has spent a good part of her professional life bringing poetry to the people. She has seen one of her poems painted in a mural on the side of a hotel near UVA and heard her song cycle “Seven For Luck” set to music by John Williams, among other distinctions.

Now she can add another unusual collaboration – with the international rock band, U2.

On U2’s tour marking the 30th anniversary of its “The Joshua Tree” concept album about America, one of Dove’s poems is part of the tour’s multimedia production.

One of Dove’s poems, “Wingfoot Lake,” appears on a giant on-stage video screen, slowly scrolling as the concert-goers enter the stadium – one of several poems included in the pre-show audiovisual program.

“To say that I was beyond surprised is an understatement,” Dove wrote in an email. “After all, poetry is not usually presented in its pristine state – that is, as a text, without musical accompaniment – at a rock concert. I was contacted out of the blue and told that the band had chosen poems that reflect the American experience. Of course I am thrilled to be included. The whole idea of projecting poetry on a screen before the concert allows the audience to connect with these words on their own. 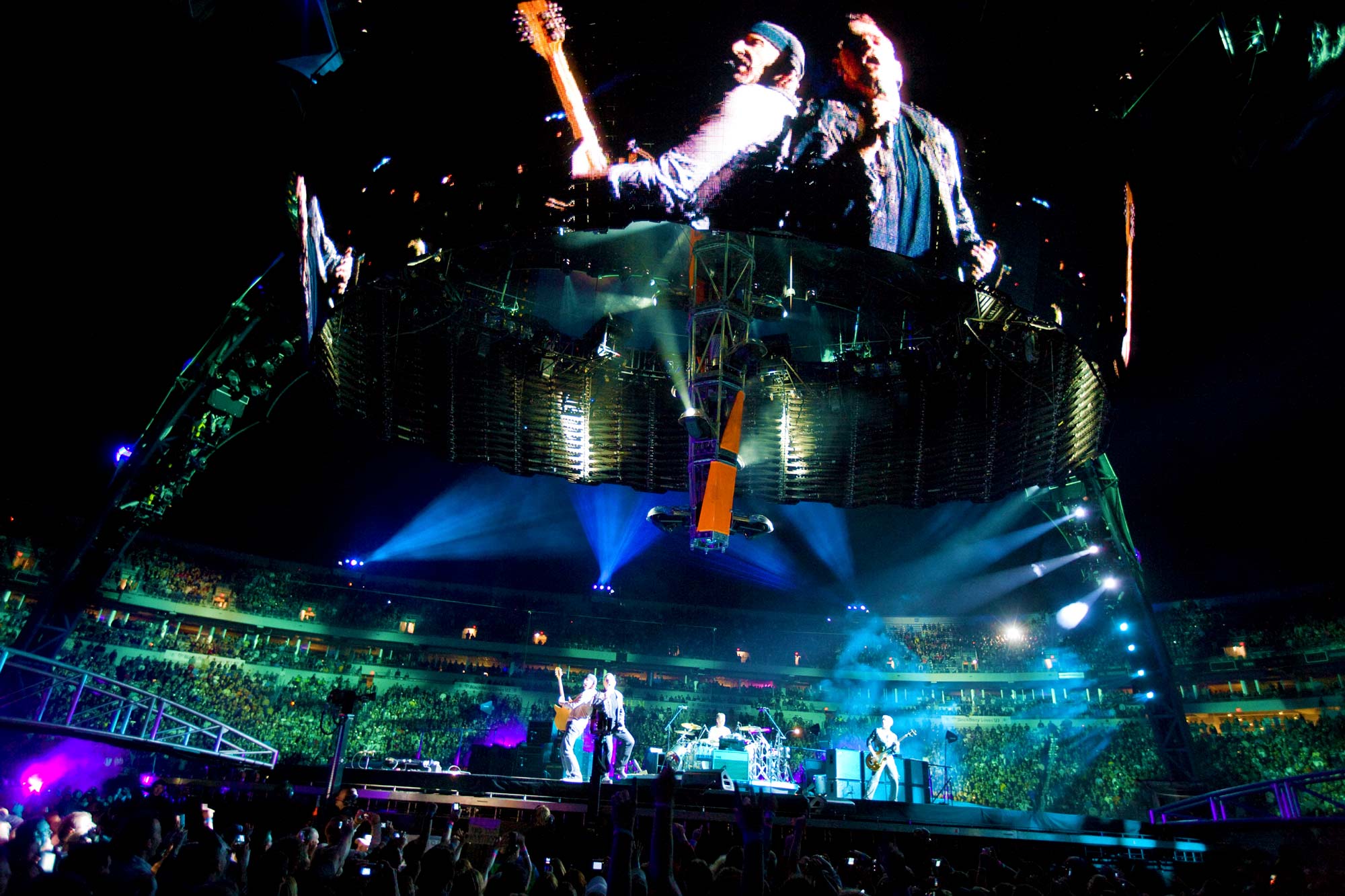 “I was particularly pleased with the selection of my poem ‘Wingfoot Lake,’ since it deals with a unique perspective of the American Dream, both the ideal and the sometimes sobering truth of experience for wide segments of the American people – and not only so-called minority populations. My already high regard for Bono and U2 has increased even more – not just because they selected my poem, but because with their ‘Joshua Tree’ revival concert, they are reminding their large audience why we need poetry,” said Dove, who served as U.S. Poet Laureate from 1993 to 1995 and Poet Laureate of the Commonwealth of Virginia from 2004 to 2006.

The poem comes from her third book, “Thomas and Beulah,” which won the Pulitzer Prize the same year “Joshua Tree” solidified the band’s fame and reputation, 1987. “Wingfoot Lake” captures 1964 segregation in Ohio, where Dove grew up, and hints at the growing Civil Rights Movement as seen through Beulah’s – her grandmother’s – eyes.

After kicking off its tour May 12 in Vancouver, British Columbia, U2 played its first American concert on this tour in Seattle on Mother’s Day. The band will play a total of 33 shows, moving from the U.S. and Canada to Europe, until Aug. 1. The closest concert to Charlottesville, a June 20 gig in Washington, D.C., is sold out.

She has won several lifetime achievement awards, holds 25 honorary doctorates, has published more than 15 books and has been part of numerous musical collaborations and audiovisual productions. In 2015, she was awarded China’s 10th Poetry and People International Prize, becoming the first American and first English-speaking poet ever to receive the honor.

Here’s the poem that U2 has included in its tour:

On her 36th birthday, Thomas had shown her
her first swimming pool. It had been
his favorite color, exactly—just
so much of it, the swimmers’ white arms jutting
into the chevrons of high society.
She had rolled up her window
and told him to drive on, fast.

Now this act of mercy: four daughters
dragging her to their husbands’ company picnic,
white families on one side and them
on the other, unpacking the same
squeeze bottles of Heinz, the same
waxy beef patties and Salem potato chip bags.
So he was dead for the first time
on Fourth of July—ten years ago

had been harder, waiting for something to happen,
and ten years before that, the girls
like young horses eyeing the track.
Last August she stood alone for hours
in front of the T.V. set
as a crow’s wing moved slowly through
the white streets of government.
That brave swimming

scared her, like Joanna saying
Mother, we’re Afro-Americans now!
What did she know about Africa?
Were there lakes like this one
with a rowboat pushed under the pier?
Or Thomas’ Great Mississippi
with its sullen silks? (There was
the Nile but the Nile belonged

to God.) Where she came from
was the past, 12 miles into town
where nobody had locked their back door,
and Goodyear hadn’t begun to dream of a park
under the company symbol, a white foot
sprouting two small wings.