Albemarle County native Jack Bertram served as a B-17 bomber pilot during World War II, completing an astonishing 36 combat missions, two of them on D-Day. Bertram, who turned 99 on Veteran’s Day, was honored Tuesday night at a stately Virginia home not far from the University of Virginia’s Rotunda.

There, the Virginia Gentlemen, a UVA student a capella group, surprised him with the dedication of their tender rendition of “I’ll Be Home for Christmas,” which was written in the 1940s to honor those fighting in the Second World War.

Several local veterans and friends of the University gathered for a holiday reception at the warmly lit home of Dr. Greg Saathoff, a professor of emergency medicine and public health sciences. He also serves on the board of the local nonprofit ParadeRest, which works with UVA students, faculty and community members to seek out and honor local veterans of recent wars back to World War II.

“We have a special guest here today, Mr. Bertram, who we would like to invite up here to this chair,” Ford Cleveland, president of the Virginia Gentleman, said Tuesday, beckoning Bertram to the front of the room. “We are so grateful today to be in your presence.”

“Don’t ask me to sing,” Bertram retorted to uproarious laughter. “You’re a good man,” he said to Cleveland, giving him a hug before taking his seat by a roaring fire.

First-year student John Atwater was the soloist for the performance of “I’ll Be Home for Christmas,” bedecked in a bow tie and Christmas sweater, as were the rest of the performers. Standing between a Christmas tree and a grand piano, his soaring tenor filled the room.

A House of History, and a Former Department Chair and ‘Monument Man’

The warm holiday scene was filled with symbolism, coming just days before the Dec. 7 anniversary of the day in 1941 when the Japanese attacked Pearl Harbor, pulling the United States into World War II.

Even the Rugby Road home where everyone was gathered holds historical significance. Current owner Saathoff said the doctor who owned the house around the time “I’ll Be Home for Christmas” was written, James Twyman, had recently graduated from UVA’s School of Medicine (after earning his undergraduate degree at UVA) and was serving overseas in the medical corps while his wife and infant son lived in the home.

Known to some as “The Twyman House,” the residence’s next owner was Frederick Hartt, one of the so-called “Monument Men” sent by President Dwight D. Eisenhower to Europe to prevent the Nazis from destroying thousands of years of culture. Hartt at one time chaired UVA’s McIntire Department of Art and was considered one of the top Renaissance scholars in the world. 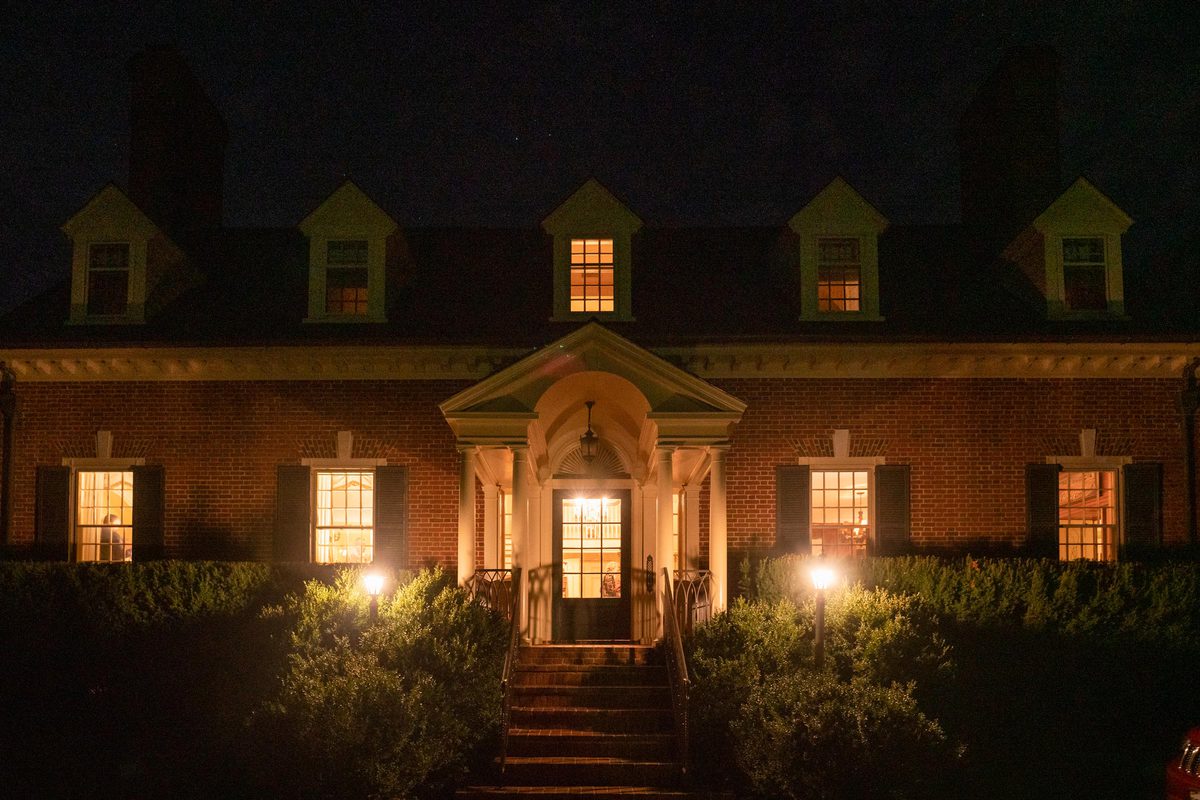 This Rugby Road residence, scene of the holiday reception for Jack Bertram, has a history deeply entwined with the Second World War.

As the song “Stars and Stripes Forever” played in the video, scrolling text told Bertram’s story. Born on Veteran’s Day in 1920, the B-17 pilot served in the 412th squadron of the 95th Bombardment Group. Based in England, Bertram flew into the history books by leading 36 combat missions over Europe.

“B-17s had the highest mortality rate, the highest injury rate and the highest capture rate of any military personnel during World War II,” Saathoff said.

Because of this, the military capped any one crew’s number of missions at 35. “It felt like the way to keep crews together was to say, ‘Look, if you can make 35, you don’t have to fly another mission,’” he said. “Each one was really death-defying, and Jack flew 36.”

The video played to thunderous applause in Scott Stadium.

Among Bertram’s flights was a special mission over German-occupied France. Bertram and his crew dropped two large containers of arms and ammunition to members of the French resistance, a move that was recognized in June 2013 when Bertram received France’s Legion of Honor, the nation’s highest decoration. 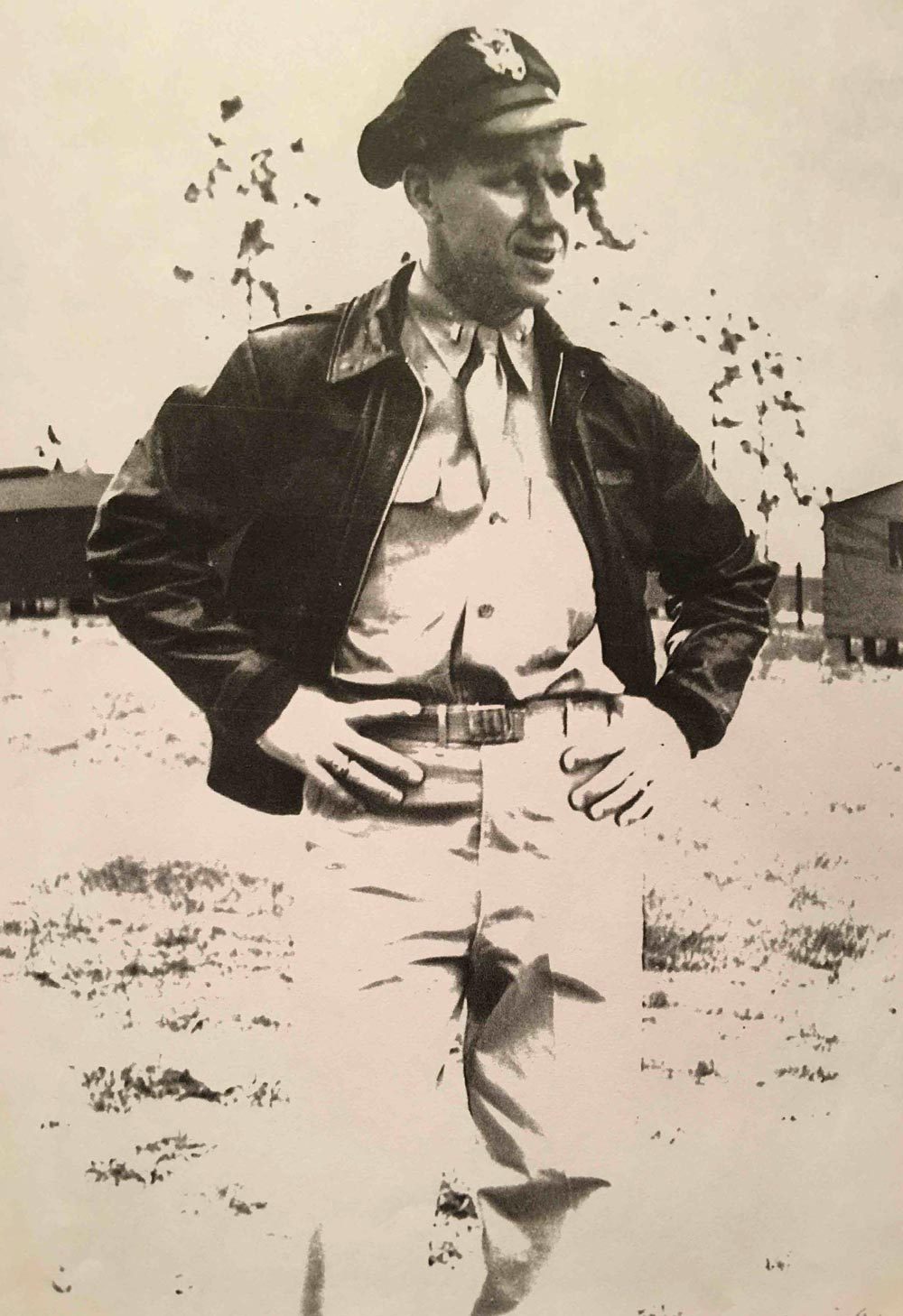 Jack Bertram photographed during his time of service. (Photo courtesy of ParadeRest)

On Mission to Munich, “The Sky Blackened”

Talking quietly Tuesday evening in the parlor before the Virginia Gentlemen performed, Bertram recalled another mission, one that took him and his crew to Munich and nearly ended their lives.

Flying out of an airfield in East Anglia, England, Bertram maneuvered his plane, flying in large circles to reach an altitude of 17,000 feet and rendezvous with the other bombers headed to Munich. “You start from 17,000 feet in formation with your group and fly up to 25-, 26- or 27,000 feet, depending what wing you are in,” he recalled.

“When we got to Munich, the shrapnel was extremely heavy,” he went on. “The sky blackened and we went in and dropped the bombs.”

Shortly after the crew closed the bomb bay doors, the B-17 took a direct hit, scattering shrapnel everywhere. The hit knocked out the inboard engine on the left side of the plane, seriously wounding a waist gunner.

“We immediately dropped out of formation because we also lost all our turbos,” Bertram said calmly. “So, we lost a lot of power and we just started down. We had to go down anyway, because our oxygen was destroyed. You can’t stay up without oxygen more than a minute or two.”

So, Bertram lowered the plane to about 5,000 feet and had to decide whether to try to get back to East Anglia or go to Switzerland, which was much closer to Munich. If they’d flown to the neutral country, Bertram and the crew would have been interned. “I just had a few minutes to make a decision. I made a decision to try and get back.

“I said a prayer that we didn’t meet any German fighters on the way back. Through some blessing, we made it all the way back and got down,” he said. 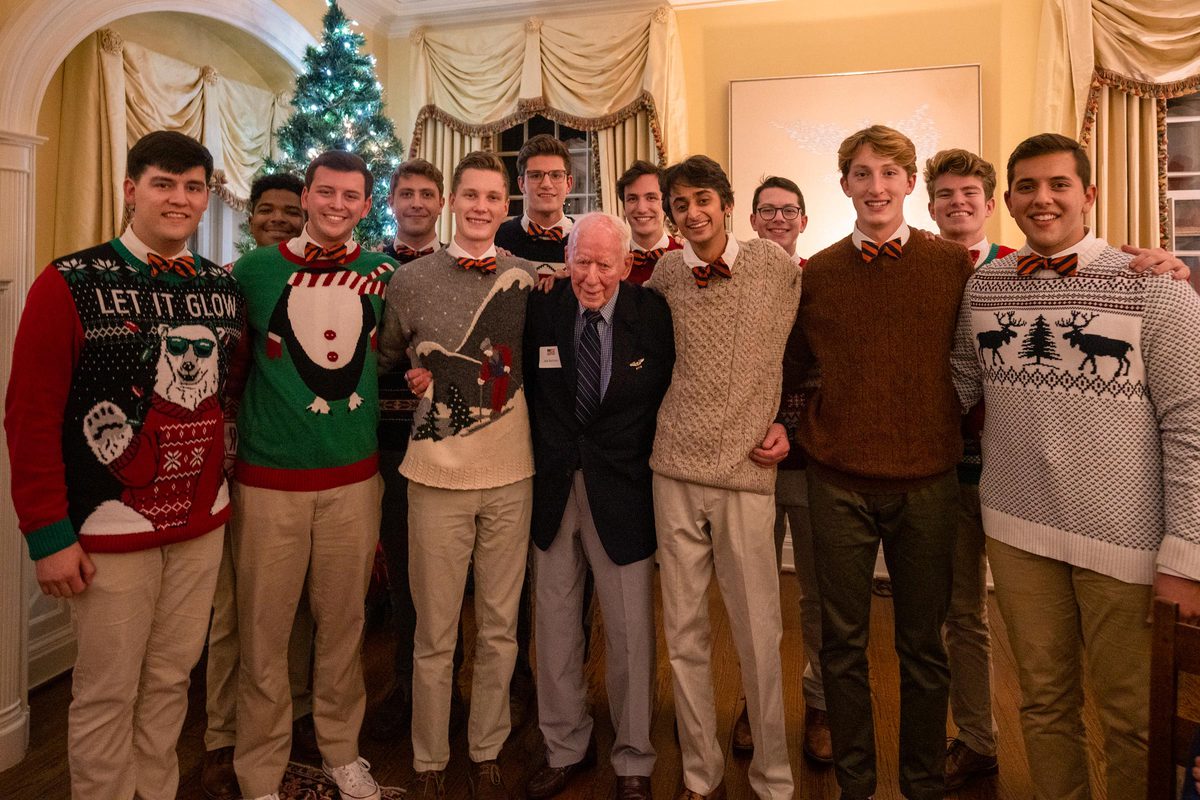 Jack Bertram and the Virginia Gentlemen pose for a holiday photograph after the performance.

In his work with ParadeRest collecting oral histories from veterans, Saathoff has had the opportunity to speak with several B-17 crew members.

“They speak about their pilots in the most reverent, awestruck terms,” he said. “These crew members, they knew that their lives just depended on the pilots.

“So for a pilot to keep his same crew for 36 missions, it’s really almost unheard-of,” Saathoff said. “I don’t think there is anyone else in the country who can hold a candle to that.”