Clarkston, Georgia is billed as the most diverse square mile in America. It welcomes more than 1,500 refugees per year, bringing together people from more than 100 ethnicities and many religions and cultures.

The film, due out early next year, follows four unlikely friends: a Kurdish refugee now working as a cardiologist at Emory University, a nonagenarian Somalian who has created a new home in Clarkston, a high school valedictorian who fled Burma when she was 16, and, most unlikely of all, a former Klansman working to combat the hate-filled ideology he once espoused.

Bernhardt is the film’s director and producer, an Atlanta-based filmmaker and a former Peace Corps volunteer who has also volunteered with refugee resettlement organizations in Clarkston for more than a decade. Blankenship, the film’s co-producer, is an architectural designer-turned-filmmaker who spent much of her architecture career designing transitional shelters for refugees.

And, Couric is, well, Katie Couric. The longtime journalist has recently turned her attention to several documentary projects, including one, “America Inside Out with Katie Couric,” that addressed some of the same questions the Clarkston documentary centers on: How can we fight racism with welcome? How can we help people fleeing violence and oppression? How can America continue to function as a global melting pot?

All three alumnae felt that the people of Clarkson could help answer those questions. They wanted to tell their stories, and to counter the racism and hate they saw in news – especially during the violent “Unite the Right” rallies that brought white supremacist groups to Charlottesville two years ago.

“Seeing what happened in Charlottesville really shook me,” Bernhardt said. “I had been wanting to tell the story of Clarkston for a while, after volunteering there for several years, and it seemed like the perfect way to show the opposite of white supremacy – a community that really exemplifies welcome and love.”

“We ran into each other at a UVA event and he told me about what Erin and Din were working on,” said Couric, who at the time was working on an “America Inside Out” episode showing footage of the Charlottesville demonstrations. She decided to sign on as an executive producer, providing advice and oversight and using her many industry connections to promote the documentary and generate publicity.

“Part of my goal, in this phase of my career, is to continue to create purpose-driven content of all kinds and also help shine a light on younger people and bring attention to important issues that I think are not being discussed enough in the current media landscape,” she said. “Running into Ken was extraordinarily timely, and I knew I wanted to get involved in something that could promote understanding, compassion and acceptance, instead of further division.” 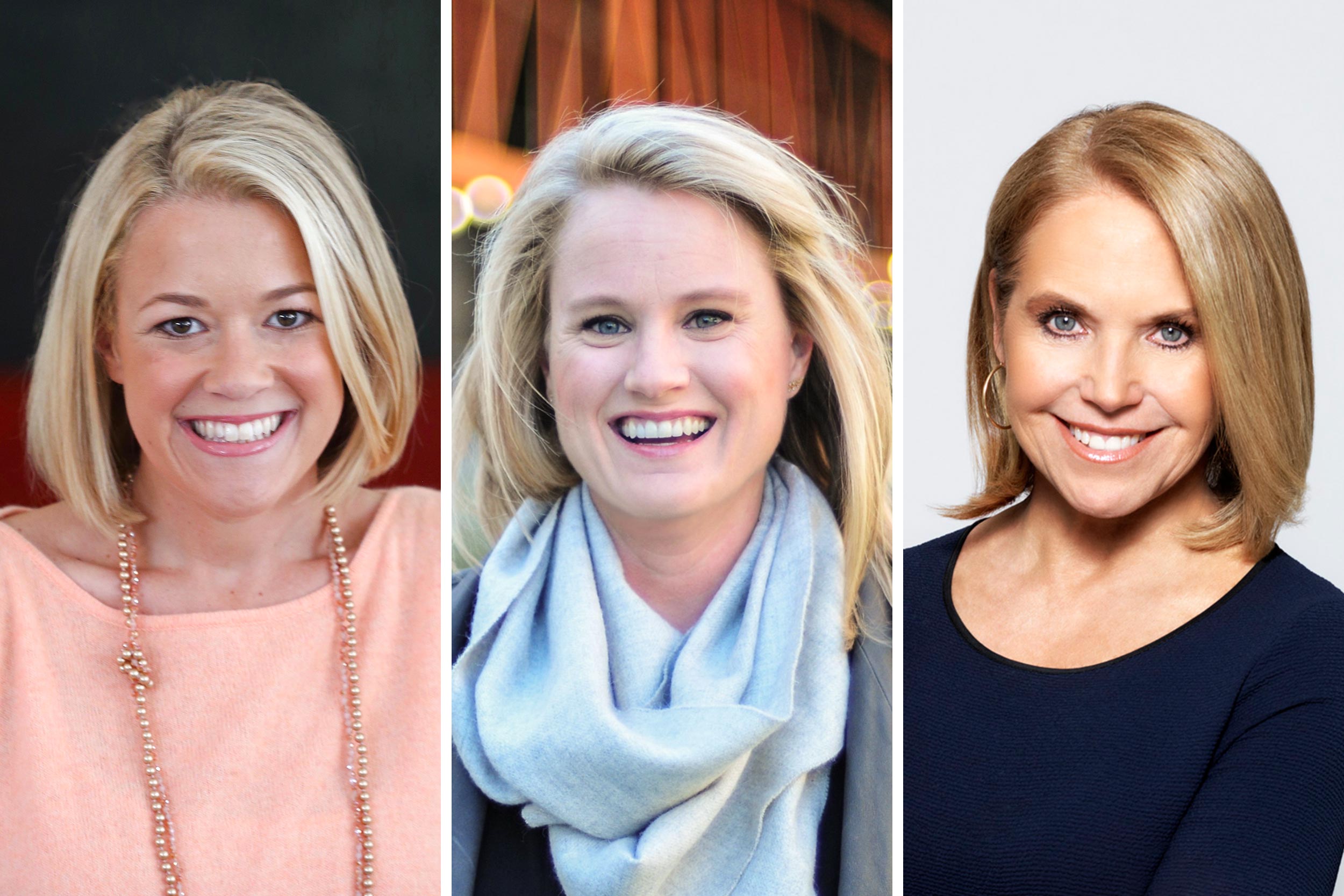 Erin Bernhardt, left, and Din Blankenship, center, were eager to learn from fellow UVA graduate Katie Couric, right, when she signed on as executive producer for “Clarkston.” (Contributed photos)

Bernhardt and Blankenship were thrilled to get a chance to work with one of their role models.

“Katie is actually why I went to UVA,” Bernhardt said. “I’ve watched her career for so long and wanted to be like her.

“Collaborating with her is a dream come true, and only UVA could have made that happen.”

Couric, for her part, has been impressed with the team Bernhardt and Blankenship assembled.

“Their work is beautiful,” she said. “The film is already in incredibly good hands. I just want to help make sure people know about it, and know that it can change hearts and minds when we need that desperately.”

At the heart of the film are its four main characters, identified by their first names: Bawi, the student; Amina, the “Mama of Clarkston” who brings everyone together; Heval, the cardiologist; and Chris, the former Klansman and an Army veteran.

Heval and Chris formed an unlikely friendship that has been documented in the Washington Post, as the doctor worked to change the mind of the Army veteran who despised Muslims and only recently left the KKK in 2016. The pair were connected by another former white supremacist, who heard Heval speak at an anti-Islamophobia conference and urged him to get in touch with Chris. 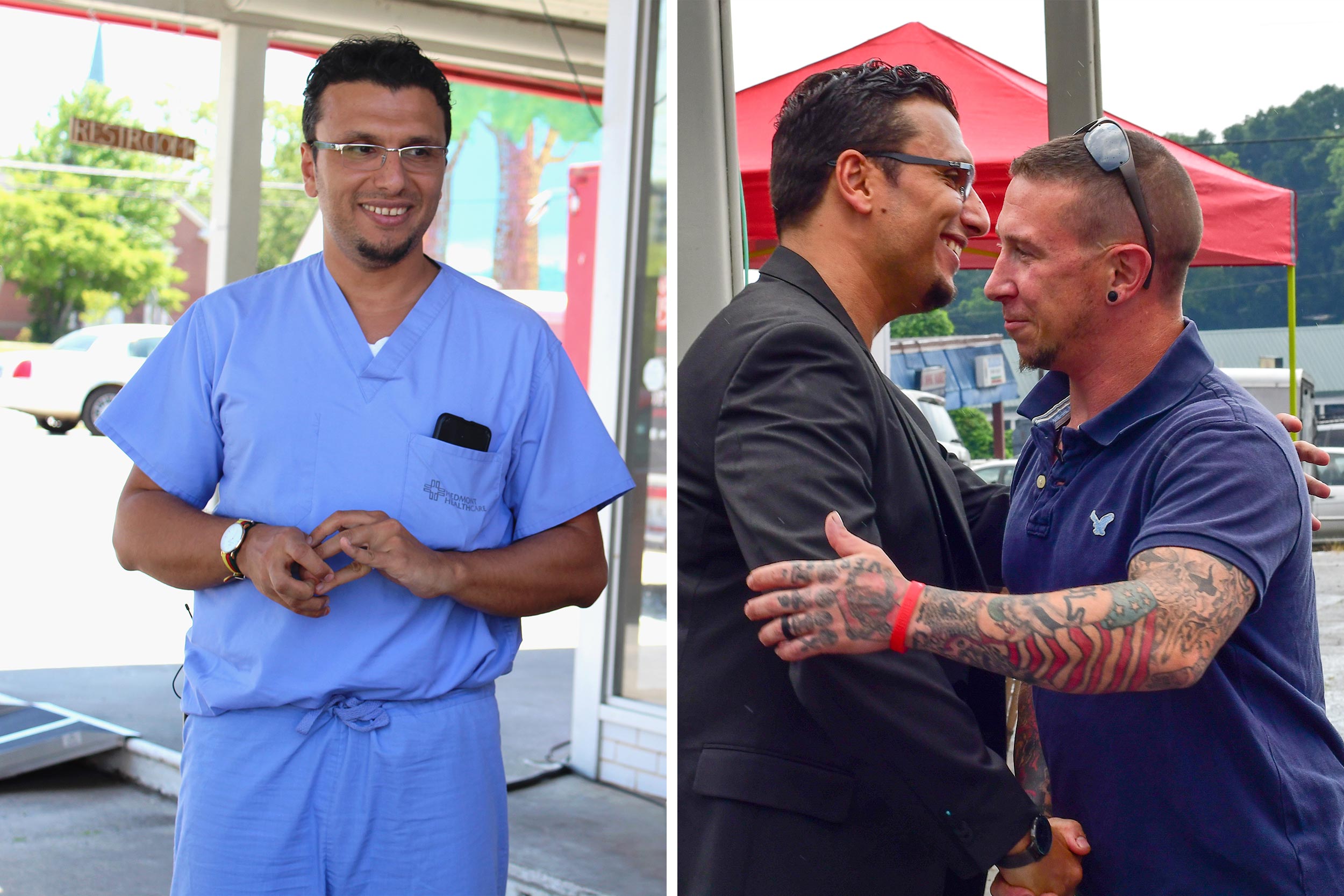 Heval, left, who came to Georgia as a refugee and now works as a cardiologist in Atlanta, agreed to meet with Chris, a former Klansman. (Contributed photos)

“We filmed the whole process of their friendship,” Bernhardt said. “It has been amazing to see how much Chris has changed.” When a gunman attacked mosques in Christchurch, New Zealand in March, for example, he immediately wanted to help and started raising money, Bernhardt said.

The two women in the film – one over 90 years old, one still in her teens – have each done their part to strengthen their community. “Mama Amina,” who recently turned 90, lost her whole family – including 10 children – to violence in Somalia in the early 1990s.

“Her response to that, instead of being angry, bitter and distraught, was to turn her pain into something beautiful: serving others,” Bernhardt said. “She considers everyone she meets to be her children, and she is just extremely involved in the community.” 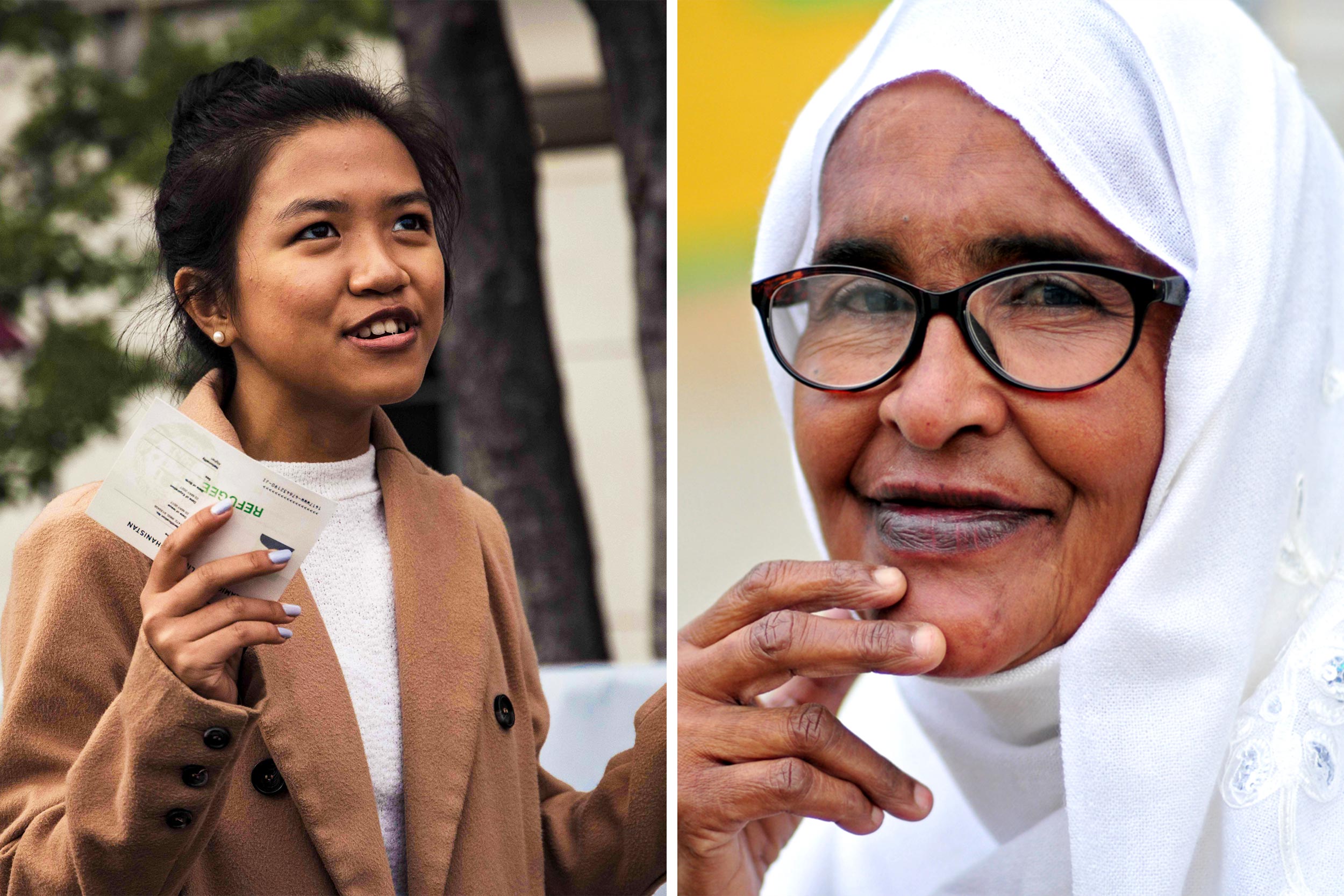 Bawi, who fled Burma with her family when she was 8 and resettled in Clarkston, just graduated as valedictorian of her American high school.

“She is just such an impressive young woman,” Blankenship said.

What brings them all together, Blankenship said, is that they have all had to rebuild some part of their identity, whether starting over in a different country or abandoning bigoted ideology.

“Each one has been stripped of something they staked a lot of their identity on, and they reacted in different ways,” she said. “Some were really fruitful and beautiful, bettering their communities, and some had a very negative reaction. But I think we can all learn from them and see how the way we react to pain shapes us and the people around us.”

A Film on a Mission

Bernhardt and Blankenship wanted their film to reflect the diverse community they were spotlighting, both on screen and off. The film’s crew is made up of mostly women and minorities and includes several refugees who have settled in Clarkston. They set up an apprenticeship program for local refugees interested in filmmaking and equipped them with skills that will set them up for other jobs in the Atlanta film industry. 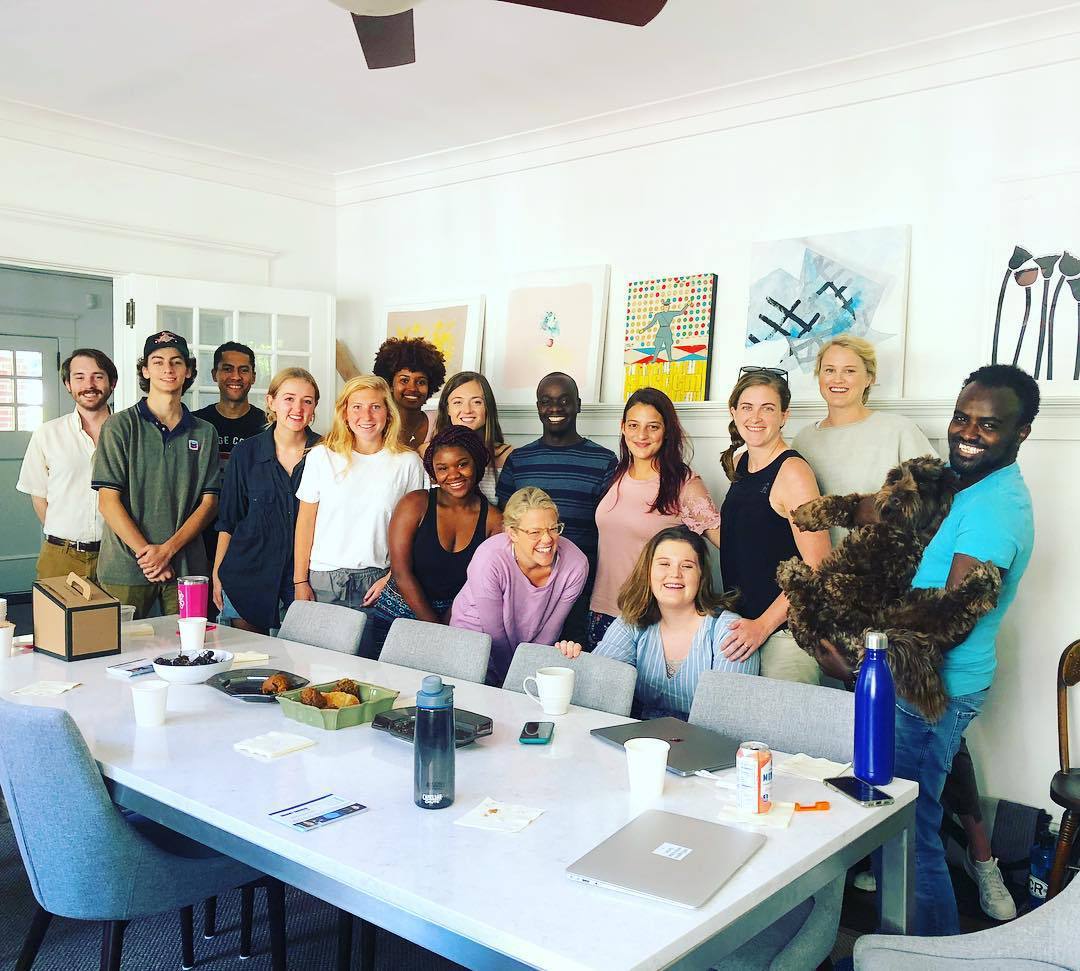 The film’s crew includes several refugees from Clarkston participating in an apprenticeship program to learn about the film industry. (Contributed photo)

“That is probably what I am most proud of,” Bernhardt said. “A lot of our apprentices are already getting other amazing production assistant jobs in the industry; they are making a livable wage, and they are making their dreams come true. That’s hard for anyone to do, especially someone new to this country.”

“Erin and Din are really walking the walk,” Couric said. “It’s one thing to tell the stories of these extraordinary people, but they are also giving opportunity to underrepresented people who have not had enough of a seat at the table in documentary filmmaking.”

Plans are also underway for a broader education campaign surrounding the film’s 2020 debut. Each of the four main characters will pick a charity or organization they would like to highlight, and Bernhardt and Blankenship are working on numerous screenings and events – including some in Charlottesville – as well as partnerships with other communities and organizations serving refugees.

“We are hoping that we will see a lot of hearts transformed through this film, and perhaps some false assumptions corrected,” Blankenship said. “We want to make sure we are equipping those newly changed people with the tools they need to make change in their own communities, and act as a conduit for people to connect with organizations doing great work around the country.”