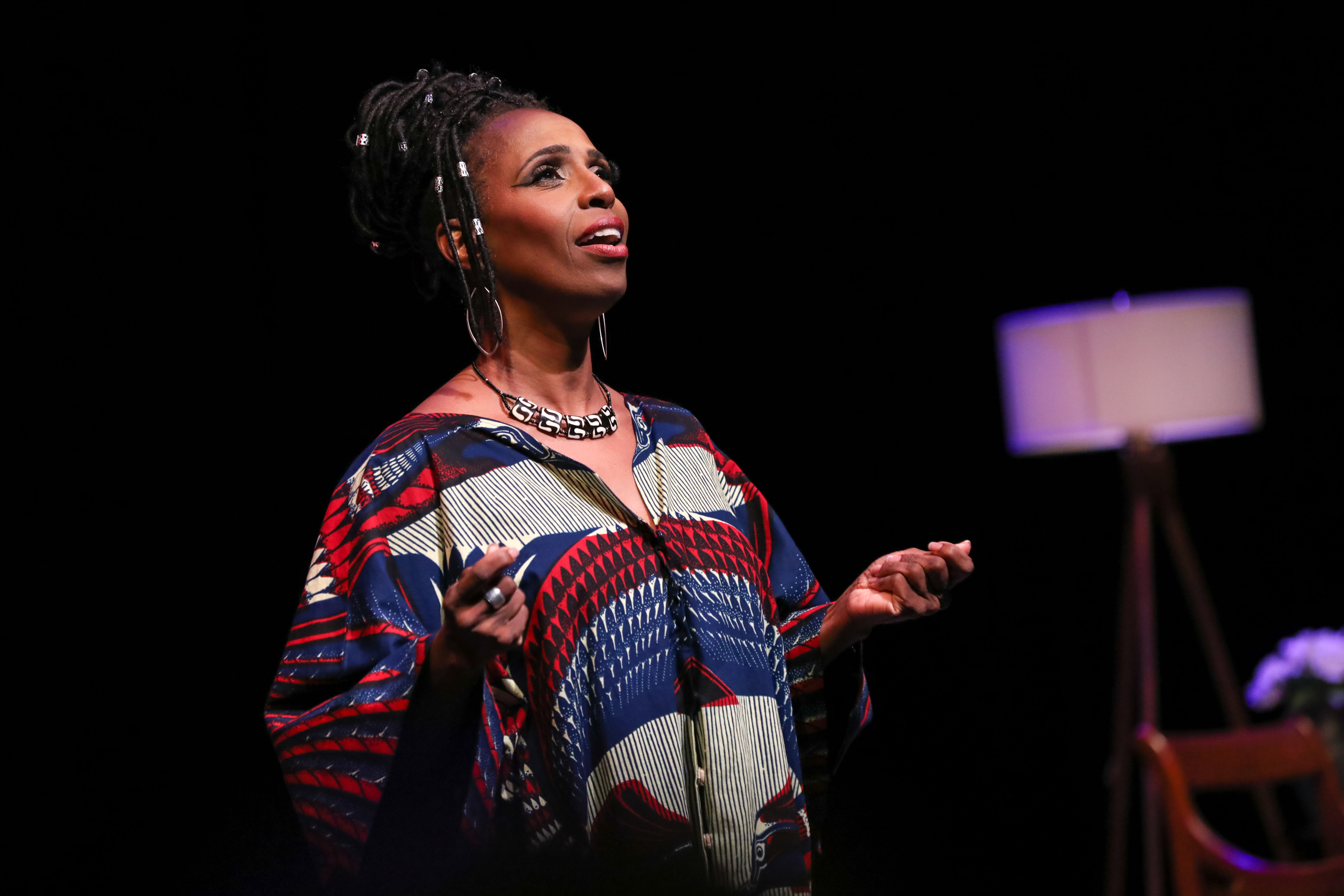 CHARLOTTESVILLE, VA – Wednesday, July 20, 2022 – What if one of the most legendary artists and activists of the 20th Century were to return to Earth for just one evening to share her unique perspective on the world as well as the songs that made her beloved around the world.

That is the premise of No Fear and Blues Long Gone: Nina Simone, the acclaimed one-person show written by North Carolina poet and playwright Howard L. Craft, coming to the Virginia Theatre Festival for a limited run from August 3-7. The show features a powerhouse performance by Yolanda Rabun as the woman whose passion helped power the American Civil Rights movement, and whose voice and talents as an artist earned her the title of “The High Priestess of Soul.”

“Nina Simone was such a fascinating and complex woman at such a pivotal time in history, and in Black history,” Williams said. “The more you know about her, the more you realize you don’t know, especially around just how much she had to overcome and how hard she had to battle to just literally and figuratively make her voice heard and be her authentic self.” The beauty of the show, says Williams, is the way that Rabun brings the spirit of Nina Simone to the stage every night. “She is such an extraordinary performer, and while the show is definitely scripted, Yolanda always makes sure there is plenty of audience interaction and will inevitably put things out there, especially when there is something prominent happening in the news.”

In fact, Craft is constantly retooling his script to make sure it represents that time in which it is presented. “It can be pretty scary,” Rabun said, “I literally wrote to him two days ago and asked if he had any new lines!’”

The journey to No Fear and Blues Long Gone: Nina Simone began for Rabun, Williams, and Craft in 2008 when Rabun was asked to perform by the University of North Carolina in conjunction with an exhibit around Simone’s work and life. “UNC had commissioned Howard Craft,” Rabun said, “whom I believe was poet laureate at the time, to write something to go along with the exhibit. He saw me in a show and thought I could represent what he would be writing. We started adding pieces of music and built a 30–40-minute piece.”

They would go on to perform a version of the piece in 2018 at the National Society for Historical Preservations on the porch of Simone’s childhood home in Tryon, NC. Rabun remembers, “We sat down and said, ‘OK, what would this look like in 2018?’ The beauty of it was that Howard basically brought in today’s political climate and built this concept of Nina coming back for one day to tell you a few things. The idea was that this would be more than a performance, it would be a conversation about what is happening on Earth, seen through the perspective of her life and her life lessons in a way that can resonate with the people in the audience.”

Not surprisingly, music plays a central role in the show’s telling of Nina Simone’s story, as Rabun performs several full songs supported by a small ensemble. “Howard was very intentional about picking out the songs for the show so that they would be integral to the storytelling and expose audiences to moments in Nina’s life,” Rabun said.

Performances for No Fear and Blues Long Gone: Nina Simone will run from Wednesday, August 3 through Saturday, August 6 at 7:30 PM with a 2:00 PM matinee on Tuesday, August 7.

Tickets for No Fear and Blues Long Gone: Nina Simone begin at $15.00 and are available at the UVA Arts Box Office in the UVA Drama Building on Culbreth Road, online at virginiatheatrefestival.org, or by phone at 434-924-3376. Hours of operation are Tuesday-Saturday from 10:00 AM until 2:00 PM, and one hour prior to each performance. Free parking for VTF performances is available at the Culbreth Road Parking Garage, conveniently located alongside the theaters.

The Virginia Theatre Festival is a program of the University of Virginia and is supported by the College and Graduate School of Arts & Sciences, the Office of the Provost and Vice Provost for the Arts, UVA Department of Drama, and UVA Arts.