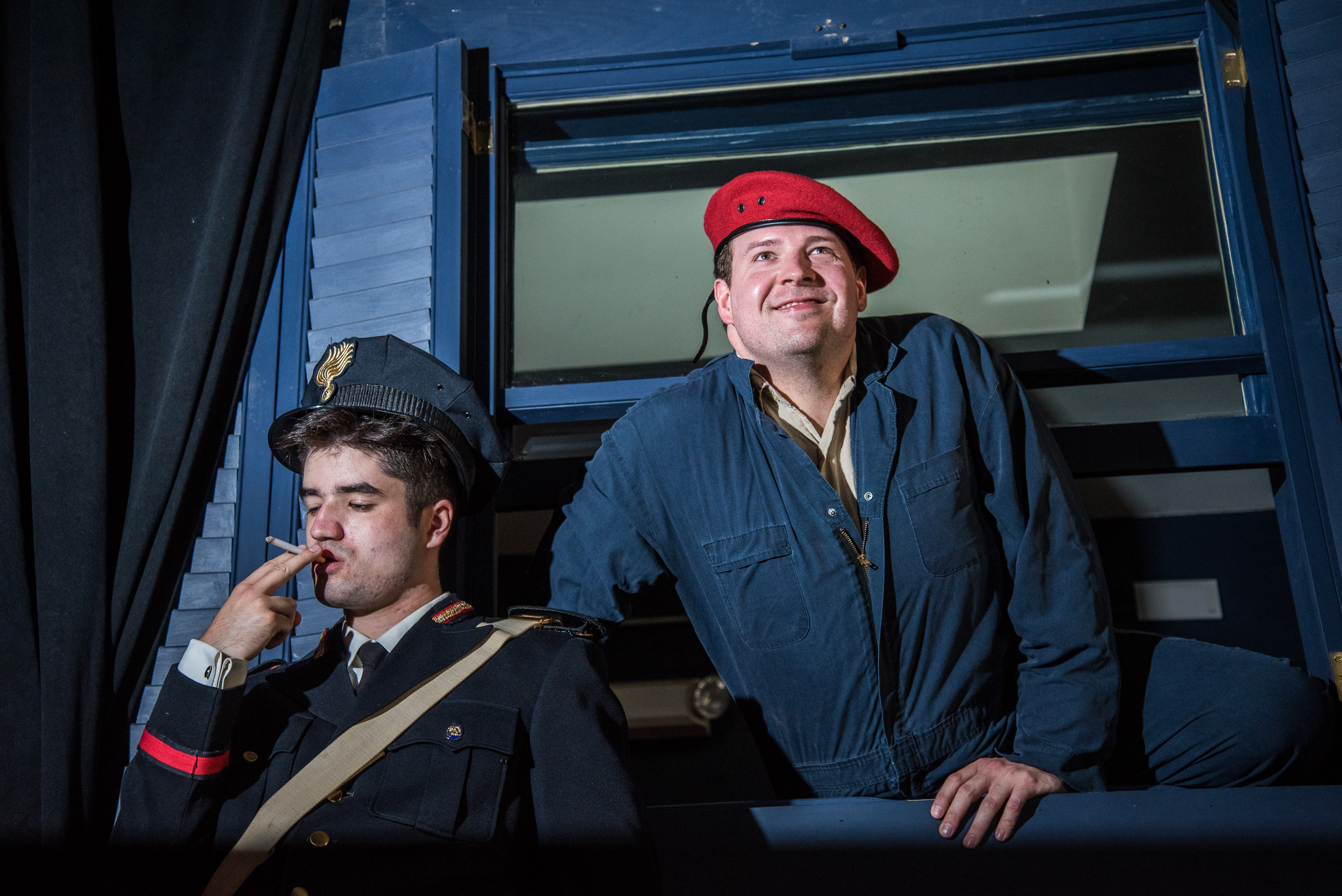 Live Arts will host two special events: An opening night reception following the May 20 performance; and a post-show audience talkback on Thursday, June 2 (7:30pm curtain). Live Arts welcomes audiences to enjoy the bar and concessions one hour prior to showtime and during intermission.

“A potent reminder that leftwing theatre should be an affirmation of joy ... [a] hair’s-breadth combination of political exposé and pungent vaudeville ...” The Guardian

In 1969 an anarchist railway worker in Milan named Giuseppe Pinelli “accidentally” plummeted to his death from a fourth-floor window in a police interrogation room. Pinelli was being questioned over a bombing at the Piazza Fontana which had happened three days earlier, killing 17 people and wounding 88. He was finally completely absolved of the crime; 32 years later a new investigation found three members of a Neo-Fascist far-right group responsible for the bombing. Based on this actual case, ACCIDENTAL DEATH OF AN ANARCHIST is a fiercely funny exposé of the rampant (and thoroughly institutionalized) corruption of the Italian police force.

Called a “grotesque farce” by the playwright, ACCIDENTAL DEATH OF AN ANARCHIST tells the story of a self-proclaimed “madman” who infiltrates central police headquarters. Using an increasingly absurd set of disguises, the madman exposes a labyrinth of lies and contradictions and manipulates his bumbling interrogators into truth-telling.

“Dario Fo is subversive; he can be controversial, and savagely satirical, and his comic philosophy was no-holds-barred,” says Evans. “As he said, his goal was to ‘provoke laughter with anger.’ In ANARCHIST farce and politics are inseparable.”

“With a blend of laughter and gravity, he opens our eyes to abuses and injustices in society and also the wider historical perspectives in which they can be placed,” according to the 1997 Nobel Prize in Literature, awarded to Dario Fo by the Swedish Academy.

ACCIDENTAL DEATH OF AN ANARCHIST (Morte accidentale di un’anarchico) premiered on December 10, 1970, by Dario Fo’s company La Comune. Nobel Prize-winning playwright Dario Fo’s political farce was seen by more than half a million people in the first two years after its 1970 premiere. It has since been performed in more than 40 countries and is considered a classic of twentieth-century theater.

Playwright, actor, storyteller, director, satirist, artist, and activist Dario Fo (1926-2016) was born in a small town on the shores of Lake Maggiore in Northern Italy. After training as an architect, Fo began working in theater as a radio monologist. He met his wife, actress Franca Rame, in 1951 while they were performing in the same show. The couple became long-time partners and collaborators. In 1968, Fo and Rame joined a surging movement of students, workers, and revolutionary groups and began performing a new kind of political theater for working-class audiences in non-conventional theaters. The couple’s controversial farces tackle ideologies of the government and the church. Through the years they were censored, personally attacked, arrested, imprisoned, and charged with everything from obscenity to blasphemy to subversion. Fo is the author of more than 25 full-length and one-act plays, including Archangels Don’t Play Pinball, Mistero Buffo, About Face, and We Won’t Pay! We Won’t Pay! The dramatist’s plays have been staged in more than 30 countries.

Susan E. Evans joined the talented Live Arts team in June 2021. Prior to that, she held several positions in the San Francisco Bay Area. She served as artistic director at Eastenders Repertory Company (directing work including We Won’t Pay, We Won’t Pay, Frozen, Fear and Misery of the Third Reich (co-director), the World Premieres of Charles Polly’s Twyla Trilogy, and many others), the Douglas Morrisson Theatre (Private Lives, Dividing the Estate, All My Sons, Eurydice, An Ideal Husband - Scott Munson adaptation), The Skin of Our Teeth and Mrs. Warren’s Profession) and Town Hall Theatre (The Revolutionists, Sense & Sensibility, The Cherry Orchard). She also directed at Contra Costa Civic Theatre and with Actors Reading Writers, and has collaborations with solo artist Carolyn Doyle, and with playwright Scott Munson (The Brecht Project). She is a proud graduate of the Drama Studio London @ Berkeley and an associate member of the Stage Directors and Choreographers Society. www.susaneevansdirector.com

WHAT: ACCIDENTAL DEATH OF AN ANARCHIST by Dario Fo

SAFETY: Live Arts prioritizes the health and safety of our volunteers, patrons, and staff by requiring indoor masks and full vaccinations for all. Please visit livearts.org/covid for our current COVID policies.